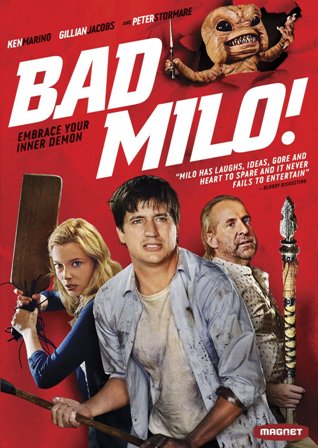 Well fellow collectors, I’d say this week’s haul isn’t too shabby.  While there are no TV series or collections to speak of, there are a total of 19 movies for us to get our greedy little hands on.  Enjoy!

Duncan’s (Ken Marino) mounting stress starts to trigger an insufferable gastrointestinal reaction. Out of ideas and at the end of his rope, Duncan seeks the help of a hypnotherapist, who helps him discover the root of his unusual stomach pain: a pint-sized demon living in his intestine that, triggered by excessive anxiety, forces its way out and slaughters the people who have caused Duncan stress. Out of fear that his intestinal gremlin may target its wrath on the wrong person, Duncan attempts to befriend it, naming it Milo and indulging it to keep its seemingly insatiable appetite at bay.

Leonard Nimoy stars in this suspenseful tale! Tom Kovack (Leonard Nimoy – Star Trek) is a hard-nosed racing driver until a sudden supernatural vision causes a near fatal crash while he s hurtling down the backstretch at 140 miles an hour. Michele Brent (Susan Hampshire – Night Must Fall) is the woman who convinces Kovack that his visions are significant. She leads him to the manor house that appears in his vision, which in turn leads him into a world of revenge and murder from beyond the grave. Kovack must tap into his new found power to conquer the evil forces at work. Also starring Vera Miles (Psycho) and Racheal Roberts (When A Stranger Calls), Scorpion presents both the UK version and the U.S version!

A group of young documentary filmmakers set off to uncover the true story behind the Black Water murders, a series of brutal killings where women were found dumped in the woods, savagely slain, with their mutilated bodies completely drained of blood. In an attempt to exonerate the man accused of the crimes, they journey into the wilderness where the deaths occurred and find themselves face to face with a form of evil they could have never imagined. What began as a mission to save a wrongly convicted man turns into a battle for their own lives.

In the wake of a worldwide viral outbreak, a group of survivors travel across the country to reunite with loved ones only to encounter a zombie apocalypse. Will they survive the walking dead without killing each other first?

A young man visits his fiance’s estate to discover that her wheelchair-bound scientist father has discovered a meteorite that emits mutating radiation rays that have turned the plants in his greenhouse to giants. When his own wife falls victim to this mysterious power*the old man takes it upon himself to destroy the glowing object with disastrous results.

Do You Like My Basement? tracks how one man’s creative frustration bore a need to make the perfect horror film. Stanley Farmer was rejected universally by the film world. His frustration provoked a darker side and soon cunning, guile, devilish charm and a sociopath’s streak compelled him to produce a home-made magnum opus. A film that blurs the lines between reality and fiction and demands the attention of the very world that spurned him.

It’s a War of the Colossal Freaks when serial killing cookie, Gingerdead Man, tracks down the lone survivor of his murderous rampage, Sarah Leigh (Robin Sydney), to take care of unfinished business. But his devious plans go up in smoke when Sarah meets LARNELL (John Patrick Jordan), who has a pint-sized problem of his own. The Evil Bong, EEBEE, has been unleashed once again. Bodies begin to pile up as Gingerdead Man carves a path for them. Their only salvation is to turn to help from the dastardly Bong. It’s one tough cookie versus one bad trip mother when the two Titans of Terror hash out a war in the Bong World. The stakes have never been higher.

A band of crusading knights escorts the Holy Grail through a plague-ridden countryside, destined for a distant land. Hunted by assassins, the knights venture into the forbidden Valley of Black Death. What they discover is even more terrifying than the plague and the ruthless killers hot on their trail; the Valley of Black Death is home to the undead. Overrun by hordes of flesh eating zombies, their only chance for survival is a mysterious maiden who can guide them out. Their final, chilling journey (to either death or success) becomes the ultimate battle of men vs. undead as they face a non-stop barrage of gruesome, murderous walking dead.

Murderer. Dream Demon. The bastard son of a hundred maniacs. Any way you slice it, there can only be one man – one monster – who epitomizes those words: Freddy Krueger. For decades, he has slashed his way through the dreams of countless youngsters and shows no signs of ever resting in peace. A Nightmare on Elm Street star Heather Langenkamp is your dream guide in this thrilling “shockumentary” that takes you deeper into Freddy’s realm than ever before, featuring exciting clips, never-before-seen photos, behind-the-scenes footage, conceptual art, publicity materials and exclusive new interviews with over 100 key cast and crew from every Nightmare, including Wes Craven, Robert Englund, Heather Langenkamp, Jack Sholder, Mark Patton, Kim Myers, Chuck Russell, Jennifer Rubin, Renny Harlin, Lisa Wilcox, Tuesday Knight, Stephen Hopkins, Kelly Jo Minter, Rachel Talalay, Lisa Zane, Alice Cooper, Patrick Lussier, Miko Hughes, Monica Keena, Brendan Fletcher, Ronny Yu and many more. So get ready for Freddy in the definitive account of modern cinema’s eternal bogeyman and what has been called the most frightening and imaginative horror franchise in motion picture history!

Blood, ska and fun flow in this over-the-top, goofy re-imagining of the classic tale. When the Sleepy Hollow Heights Horror Club learns their local grindhouse will be shut down, they plan a 24-hour horror-movie-marathon as a last-ditch effort to save the theater. Unbeknownst to them, The Phantom, a derelict who has been hiding out at the theater for years, will stop at nothing to keep the meddling kids from ruining his sanctuary. But when The Phantom gets a load of their leader Christine, things turn from bad to worse as he falls head over heels for the girl of his dark dreams.

Psychophony: An Experiment In Evil (2012)

In the mid 2000’s, Dr. Helen Jara carried out a series of psychological experiments on a group of patients with schizophrenia. These experiments were not approved by the board of Psychological Studies. Dr. Jara was attempting to prove that these patients’ hallucinations were of paranormal origin. She succeeded by recording unexplained paranormal phenomena on a series of devices; but in the process of doing so, the paranormal activity increased dramatically, culminating in the unexplained death of Dr. Jara, Parapsychologist Matias Kram and his assistant. When the videotapes and recordings were found by investigators, they discover bone chilling EVPs that were not documented in the journals, resulting in the unexpected manifestation of horrifying Psychophonies. The youngest patient is asked to return and resume the experiment, which results in a confrontation with dark and nefarious forces from the other world.

Meet Ryan, a small time reporter in a dead-end job. Meet his wife, a pharmaceutical employee whose company is developing five pills that will easily and painlessly end human life. Then meet William a parolee who has just been released from prison after serving time for killing his entire family when he was just twelve years old. William is willing to give Ryan the inside scoop on the killings, including where he buried his baby brother, in exchange for the five pills that will allow William to end his own life. The terms of the bargain are that William will give Ryan five separate interviews as long as Ryan brings one of the pills to each of the interviews. At the end, Ryan will have the story of a life time and William will be dead but can Ryan trust a cold blooded killer to keep his word? Is it worth the risk of his wife losing her career for stealing the pills? Ryan is put to the test and has to ask himself if he has the courage to play the ultimate game of Russian roulette.

An ailing former scuba diver, who faces extremely tough times, begins experiencing otherworldly incidents. Colby (Jeremiah Sayys) suffers an accident that effects his hearing. The death of his wife causes him to become even more withdrawn. He begins to hear things his family can’t.

Halloween night a gang of killer clowns on are the rampage and after seeing their friend mutilated by them, three friends decided to go above the law in a bid to stop the red nosed crazies. Following them to an old asylum, they soon become the hunted in this fun house of blood and guts, fighting for survival against muscle, madness and chainsaws… Putting a spin on the usual ‘teens vs killers’ flick, Splash Area delivers a grindhouse horror with a cast of fresh faces, plenty of action and enough black comedy to keep everyone happy! Winner of Best SFX & Jurys Choice, Freak Show Horror Film Festival

Thanatomorphose is a french word meaning the visible signs of an organism’s decomposition caused by death. One day, a young and beautiful girl a wakes up and finds her flesh rotting.

On Laura’s 27th birthday, her and six friends are trapped into a closet by a psycho killer. It turns out they’re part of a twisted game, where fans watch the murders live over an internet webcast.

A dangerous young woman (Sarah French) offers up human sacrifices to a ghost ship of the dead in return for an ancient treasure. When she comes up one sacrifice short, her zombie masters exact their bloody revenge in this gory tribute to Spain’s popular Blind Dead Euro Horror series. This outrageous horror movie was directed by Steve Sessions (Sinister) and stars the beautiful Sarah French (Insectula). Presented in a 16×9 Anamorphic Widescreen Edition mastered from High Definition.