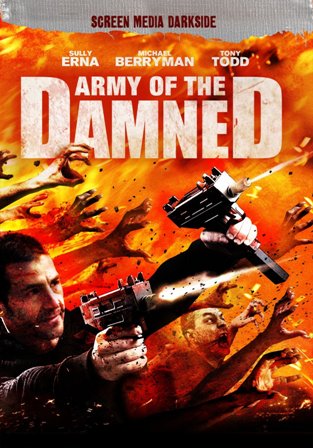 In case you missed my DVD releases for last week, that’s because, well, they didn’t happen.  The hard drive which I happened to store all of my current (and archived) articles on decided to (for lack of a better word) shit the bed.  Even more unfortunate is that this melt-down came only after I had just finished my article regarding last week’s healthy listing of DVD and Blu-ray releases for you fellow hard-copy fiends.

Anyhow, I’ve made the best of the situation this week so here you go:

When a pair of small town cops go radio silent on a routine call, police chief Bridge (Sully Erna) must go in to investigate. The search and rescue mission becomes a fight of epic proportions when those sent in to help are confronted with a force they ve never seen before, and an evil that they never knew existed. Army of the Damned is a gruesome battle sure to scare the hell out of you!

Chloë Grace Moretz and Academy Awardr nominee Julianne Moore* star in this exhilarating reimagining of Stephen King’s iconic best seller. After merciless taunting from classmates and abuse at the hand of her religious fanatic mother (Moore), Carrie’s (Mortez) anger – and her telekinetic powers – are unleashed. And when a prom prank goes horribly wrong, events spiral out of control until the terrifying conclusion of this powerful, pulse-quickening horror story.

A singer holes up at a sinister estate to write new songs for his act. The ghost of his murdered wife begins to haunt him, then the person who actually killed her shows up at the mansion.

Four young, attractive girls go on a bachelorette party weekend in a remote country house in Spain, owned by their friend looking for sun, sex and sangria. The private party takes a sinister turn for the worst as one by one, the guests are brutally murdered. The race is on to uncover the killers identity and either fight back or die.

After their parents divorce, one daughter lives with her mother in England while the other lives with her father in Portugal. After the untimely death of her mother, the one daughter stands to inherit a large sum of money and also a number of documents containing information that will incriminate her father, who was a crooked judge. While her father wants the documents, her sister wants the money and they will each stop at nothing, even murder, to get what they want.

When a dysfunctional gang s prison breakout goes violently wrong, they need a hideout in a hurry. Picking the McMansion of a middle-class family in the suburbs seems like a safe bet, until it becomes clear that this particular family has reintroduced some very old-fashioned cuisine to their table.

Will the Tans escape the trap, or is there gangster in the casserole tonight?

A gruesomely funny, no-holds-barred comedy with style to burn, Fresh Meat will leave you hungry for more.

Old St. Leopold’s Hospital has many urban legends surrounding it, but the residents of Bridgeport all agree on one thing: tortured souls roam its abandoned halls. The mystery proves too much for a pretty young student who decides to investigate for her senior class project. Unfortunately, she does not find ghosts. She, instead, finds Stanley… serial rapist, murderer, and psychopath.

An old man that lives in an old house conducts a correctional institute for girls. But he does not realize that the date is the present as he is cooped up in the house. He is assisted my a matron who likes to get the girls into trouble and present them in front of the old man who thinks he is the law and he passes out punishment. Afterwards the girls get tied to a cross and whipped. Meanwhile The matrons son falls in love with a girl at a party and bring her to the this house.

An ailing former scuba diver, who faces extremely tough times, begins experiencing otherworldly incidents. Colby (Jeremiah Sayys) suffers an accident that effects his hearing. The death of his wife causes him to become even more withdrawn. He begins to hear things his family can’t.

Imagine an insatiable demon that feeds on blood, thrives on pain, and reaches from beyond the grave to torment the living.and the dead. For believers and skeptics alike, there is nothing in this world or the next to rival the relentless evil of a Voodoo Possession. Burdened since childhood with a gnawing sense of guilt, cynical Aiden Chase journeys to a Haitian insane asylum in search of his missing brother. Upon arriving, he discovers all the inmates and the hospital administrator (Danny Trejo, Machete) are seemingly possessed by a bloodthirsty voodoo spirit. Now, Aiden must abandon reality and descend into a terrifying spirit world to try to rescue his brother – or they will both be damned for eternity.

Aubrey and Paul Davison decide to celebrate their wedding anniversary by inviting their four children and their significant others to a family reunion at their remote and slightly rundown weekend estate. But the family reunion goes awry when their home comes under siege by a mask-wearing team of crossbow-bearing assailants. The family has no idea who’s attacking them, why they’re under attack, or if the attackers are inside or outside the cavernous, creaking house. All they know for certain is that nobody is safe.

Two of Ed Wood’s most famous/infamous films on a single DVD. Glen or Glenda tells two stories*one of Glen/Glenda who likes to dress in women;’s cloths and doesn’t know how to tell his fiancee. Plan 9 From Outer Space is Wood’s opus to sci-fi and horror films that succeeds on every level except as good film making. Comically horrendous*it still manages to entertain and features Bela Lugosi in his final film role.

House of Black Death – Two warlock brothers use their powers and covens of witches to battle over the family fortune.

Creature of the Walking Dead – An executed mad scientist had discovered the secret of eternal youth by draining the blood of young woman. His ancestor moves into his home and discovers the scientist’s body. He revives himand the terror continues.

Attack of the Mayan Mummy – A Research scientist has discovered the hidden chambers in the Great Pyramid of Yucatan which stores the treasure of the ancient Aztecs. Howeverthe treasure is guarded by a living mummy that will stop at nothing to protect the treasure.

THIS ITEM WILL BE RELEASED ON JANUARY 19TH

THIS ITEM WILL BE RELEASED ON JANUARY 19TH