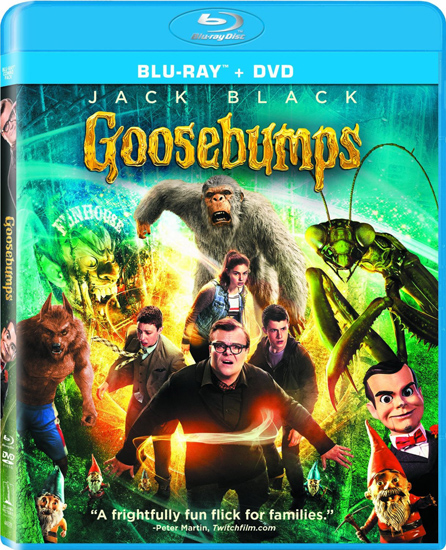 Synopsis: After moving to a small town, Zach Cooper finds a silver lining when he meets next door neighbor Hannah, the daughter of bestselling Goosebumps series author R.L. Stine. Stine is very strange and mysterious and it turns out for good reason. He is a prisoner of his own imagination – the monsters that his books made famous are real, and Stine protects his readers by keeping them locked up in their books. When Zach unintentionally unleashes the monsters from their manuscripts and they begin to terrorize the town, it’s suddenly up to Stine, Zach, and Hannah to get all of them back in the books where they belong.

Synopsis: The lone survivor of a serial killer’s attack tries to cope with the death of her friends and her mutilation at the hands of the maniac – but she fears the trauma has awakened a dark side within her as she slowly becomes something possibly even worse than the man who scarred her forever.

Synopsis: Millionaire Mason Murphy renovates the haunted Mayhew mansion. He moves his family to the estate with his creepy servant Zacharia (Gary Busey). He plans a tremendous lunar eclipse viewing party to celebrate his return to his hometown of River Ridge Iowa. At the party, a witch casts a spell to summon the spirit of her dead boyfriend. The magic runs out of control under the eclipse and a series of deadly accidents lead to revenge killings and then all the monsters come out as the party guests are murdered one by one. Each murder and death is unique, macabre, and horrifying at the Mansion of Blood. Who, if any, will survive? Bonus features include: trailers

In The Hell Of Dixie

Synopsis: A Blood-Drenched Southern Shocker in the Tradition of Battle Royale and The Most Dangerous Game Every town has its secrets. During one terrifying night, Gloster, Louisiana, lets its darkest one out. Deep in the woods of southern Louisiana, a masked killer stalks members of a local hunting club. As blood trails begin to connect the victims, police deputy Ned Annison finds himself caught in the middle, pursued by both the killer and the town sheriff, who believes Ned is the man responsible. Always one step ahead, Ned works to stop the killer and clear his name, only to find that some friendships end in blood.

Synopsis: A group of beautiful Internet models are trapped inside their recording studio and hunted down by a mentally unstable fan they insulted live on the air. Now the girls must join together to escape and face their murderous stalker, or be picked of one by one. Beauty may only be skin deep, but revenge cuts to the bone.

Synopsis: Canada’s remote wilderness becomes a chilly catalyst for terror as a group of archaeologists uncover a strange structure buried in the snow. As paranoia and mistrust take hold, the researchers turn on each other, encouraged by visions of a mysterious figure lurking at the fringes of the woods. Is the terror real or a hallucination? Whatever they’ve unleashed is a powerful force they may never comprehend…if they survive.

Synopsis: Heavenly Host Elementary School is a legendary elementary school for ghost stories due to its mysterious past. It was torn down following the murders and disappearances of several of its staff and students and now another school called Kisaragi Academy has been built over it. One rainy night a group of Kisaragi students still at school decide to perform the “Sachiko Ever After” charm, which will unite them forever as friends. Upon completion of the charm, a sudden earthquake transports them to Heavenly Host Elementary School, which still exists and is haunted by murderous ghosts. Seperated, the students try to survive the mysterious forces of the school and find their way home as they uncover the horrific past of Heavenly Host.

Synopsis: One hundred years ago, Jack the Ripper slashed his way through London’s red light district. Now, a modern-day maniac is honoring the event by mutilating L.A. ’s ladies of the evening. Has Jack the Ripper been reborn? The police are stumped and the prostitutes of L.A. are scared. The only person with a chance of solving the murders has a problem of his own: he’s the LAPD’s number one suspect.

Synopsis: This horror story from exploitation auteur Fred Olen Ray gets a stripped-down presentation in this DVD release. Step right up…and pray for your soul! A group of teens get more than their money’s worth at the local SIDESHOW when the evil ringmaster, Dr. Graves, grants them their wishes. However, deepest wishes can – and sometimes do – backfire. Just one visit isn’t enough, so come back often. New freaks are arriving nightly at this SIDESHOW! We guarantee it! If we can’t find enough freaks, why not just make them? Welcome to the FREAKSHOW, the place where terror is the main attraction! Bonus features include: Trailers

Synopsis: Jack Deth, the super cop from the future, has put away three centuries worth of time traveling criminals. But Deth’s most dangerous collar, the ultraviolent assassin Edlin Shock, has escaped from her maximum security holding cell and won’t rest until she’s exacted revenge. Meanwhile, Deth is trying to make a life for himself as a private eye in 1988 Los Angeles with his hot-blooded girlfriend Lena (played by Academy Award winning actress Helen Hunt). Relationship troubles are just the beginning of Deth’s problems when he learns that Edlin Shock has followed him back in time. Aided by his former police chief McNulty, whose consciousness is inhabiting the body of a 13-year-old girl, Jack Deth will have to use his wits, as well as his fists, to save the past, present, and future!

Thrill Of A Kill, The

Synopsis: Kim has a fight with her mother and runs off into the woods. A chance meeting with a local photographer sons turns into a living nightmare as Kim is captured and run through a series of gruesome tortures, one worse than the last. Graphic and disturbing.