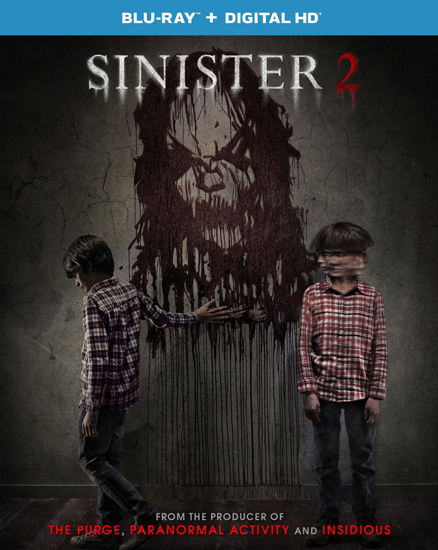 Synopsis: The sequel to the 2012 sleeper hit horror movie. In the aftermath of the shocking events in “Sinister,” a protective mother (Shannyn Sossamon of “Wayward Pines”) and her 9-year-old twin sons (real-life brothers Robert and Dartanian Sloan) find themselves in a rural house marked for death as the evil spirit of Bughuul continues to spread with frightening intensity.

Digital Copy of Sinister 2 (Subject to expiration. Go to NBCUCodes.com for details.)

Time to Watch Another: The Making of Sinister 2

Synopsis: On a dark and stormy night the last train out of London comes to a sudden halt deep in the middle of a forest. After the driver ventures out to investigate and never returns, the passengers are in a state of panic – particularly after seeing the driver’s mutilated body outside the carriage. Realizing there’s something dangerous lurking in the forest, a ticket-collector, Joe (Ed Speleers), tells the passengers to make barricades to secure themselves in the carriage, but soon the deadly creature is stalking the besieged train and smashing through their defenses, picking them off one-by-one. Joe rallies his ‘pack’ of passengers to fight back. During a vicious battle they manage to kill the creature, revealing it to be a hideous mutated fusion of human and wild animal – a werewolf. However, celebrations are cut short when they hear more howls coming from the forest…

Synopsis: THE VIRUS IS SPREADING…  Picking up immediately after the events of the first film, this riveting sequel follows Riley (Matt Mercer, Contracted), now infected and running out of time, as he attempts to find out more about the virus and its mysterious host. As he digs deeper into its origins, Riley attracts the attention of a detective (Marianna Palka, Good Dick) who doubts his innocence, and BJ (Morgan Peter Brown, Absentia), who holds the key to the virus (and perhaps the destruction of mankind as we know it) leading to a blood-soaked finale you have to see to believe. Hang on to your barf bags, buckle up, and get ready for the genre ride of the year!

Demons at the Door director Roy Knyrim draws inspiration from one of the most high-profile UFO sightings ever recorded for this fact-based sci-fi thriller that recreates the infamous Phoenix Lights case. On March 13, 1997, community leaders, law enforcement officials, and countless everyday citizens in the southwestern United States witness a phenomenon that simply couldn’t be dismissed by even the most hardened of skeptics. Jason Connery, Ashley Peldon, A.J. Cook, and Gwendoline Yeo star in a film that draws on transcripts taken during hypnotherapy sessions to explore precisely what happened to six strangers stranded on a forgotten road during that fateful close encounter.

For the NASA-funded research team stationed at the most desolate reaches of Antarctica, it’s another routine day – until the communications satellite picks up a mysterious signal coming from a strange object lodged several meters beneath the ice. Suspecting it may not be from earth, the lead scientist immediately places a call to Julian Rome (James Spader), an old friend formerly employed as a cryptologist for the U.S. Government’s SETI (Search for Extraterrestrial Intelligence) program.

Catching the next flight to the South Pole, this former Alien Hunter is soon led to the unidentified object which is still encased in a large block of ice. After constructing a makeshift decoder, Rome quickly cracks the complex mathematical code, only to discover the message is an alien warning. Now it’s a terrifying race against time to prevent the total annihilation of the planet in this pulse-pounding sci-fi thriller.

Natasha Henstridge (Species) is Melanie Ballard, a headstrong police lieutenant on Mars in the year 2025. Humans have been colonizing and mining on the red planet for some time, but when Ballard and her squad are sent to a remote region to apprehend the dangerous criminal James Desolation Williams, played by Ice Cube (Friday), they discover that he’s the least of their worries. The mining operations have unleashed a deadly army of Martian spirits who take over the bodies of humans and won’t stop until they destroy all invaders of their planet.

The Day The World Ended

A woman trying to help a disturbed child discovers his nightmarish fears are all too real in this sci-fi horror opus. Dr. Jennifer Stillman (Nastassja Kinski) is a child psychologist from New York City who takes a job working at an elementary school in a small Nevada community. Jennifer is seen as an unwelcome outsider by most of her neighbors and colleagues, but she does strike up a rapport with Ben (Bobby Edner), a troubled young student. Ben is haunted by fears he has a hard time talking about, and she learns that his mother died under unexplained circumstances — a matter his father (Randy Quaid) is equally reticent to discuss. As Jennifer struggles to get to the bottom of Ben’s traumas, she learns that a monster from another world and a terrible secret the town has been trying to hide are both parts of the puzzle. The Day the World Ended was loosely adapted from Roger Corman’s 1956 film of the same name, which was the first monster movie the B-movie icon made for American-International Pictures; this version was created as part of the made-for-cable Creature Features series.

Synopsis: Using a special camera that can see spirits, a family must protect their daughter from an evil entity with a sinister plan.

Synopsis:   Six members of a media company go on a weekend business retreat at an isolated lodge in the woods. When one of the members goes missing, they discover that the lodge was formerly a private mental institution that had been shut down after allegations of unethical behavior. One by one, they fall victim to the dark secrets buried at the lodge. This is no vacation… this is a SILENT RETREAT!

Hands of the Ripper

Synopsis: As a young child Jack the Ripper’s daughter witnesses him kill her mother. As a young woman she carries on the murderous reign of her father. A psychiatrist tries to cure her with tragic consequences.