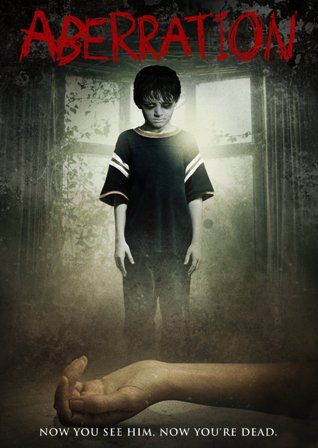 This week brings with it 31 new horror releases on DVD and Blu-ray, including:

Synopsis:                             On the outside, Christy Dawson is just a normal high school student, but she hides a chilling secret. Caught between the worlds of the living and the dead, she has been plagued by horrific, terrifying visions. With the appearance of a ghostly young boy, these horrific glimpses of evil begin bleeding into her reality. Someone or something is killing everyone around her, and her only hope of survival is to uncover the truth behind a mystery that has shrouded the entire town in terror.

Synopsis:                             Corporate smuggling of South American killer bees into the United States results in huge swarms terrorizing the northern hemisphere. A small team of scientists work desperately to destroy the threat, but the bees soon mutate into a super-intelligent species that threatens the world and look for human flesh to feast on!

Synopsis:                             Blood of 1000 Virgins features May 2012 Playboy Playmate Nikki Leigh taking you on a psycho, seductive voyage through the world of Virgin Exploitation films. The young and the innocent have their lives threatened by sick degenerates, evil creatures, and the devil himself. Will they escape with their virginity intact? Will they get revenge on their would-be attackers? Will our host make it out alive? All these questions and more will be explored in the craziest trailers hosted by one of Playboy’s finest! Starring Playboy Playmate Nikki Leigh and featuring Don Johnson, Rip Taylor, Udo Kier, Betsy Russell, John Carradine, Linda Blair, Linnea Quigley and Chesty Morgan.

Synopsis:                             A frightened young girl grows into a fearless vampire hunter after seeing her parents killed by a sadistic bloodsucker, being raised with her little brother by kindly church-goers, then watching in horror as the same creature who took her mother and father slaughters her beloved sibling.

Synopsis:                             In 2008 a cast and crew set out to shoot a pilot for a paranormal reality show. During the first night vague apparitions became violent hauntings. One by one they lost their lives. The Crying Dead is a diary of the final tortured moments of real people in an unthinkable situation.

Synopsis:                             In this the third film in the continuing saga of the undead from writer/director George A. Romero (Night of the Living Dead, Dawn of the Dead, Land of the Dead, Diary of the Dead, Survival of the Dead), a small group of scientists and soldiers have taken refuge in an underground missile silo where they struggle to control the flesh-eating horror that walks the earth above. But will the final battle for the future of the human race be fought among the living or have they forever unleashed the hunger of the dead? Lori Cardille, Joe Pilato and Richard Liberty star in this controversial classic with groundbreaking gore effects by Tom Savini.

Synopsis:                             Five shocking vignettes, designed to take your sanity and devour your soul! Mild curiosity leads to severe consequences when a couple rents a supposedly cursed video cassette recorder. An urban legend renowned for leaving a trail of agonizing and torturous death. Unbelieving, they take the plunge. And another legend is horrifyingly born.

Synopsis:                             After brilliant scientist Dr. Paul Carruthers (Bela Lugosi) develops an ingenious product for a cosmetics company, he is cheated out of his fair share of the profits by his greedy partners. Hell bent for revenge, he decides to turn his laboratory of science into one of doom as he creates a giant race of bats that turn into ripping and shredding beasts of fury, designed to attack anyone wearing the very product he invented. This classic horror film finally gets the beautiful HD remastering it deserves.

Synopsis:                             The original Dracula, starring Bela Lugosi, launched the Hollywood horror genre and defined the iconic look and frightening character of the famed vampire. Towering ominously among the shadows of the Carpathian Mountains, Castle Dracula strikes fear in the hearts of the Transylvanian villagers below. After a naive real estate agent succumbs to the will of Count Dracula, the two head to London where the vampire hopes to stroll among respectable society by day and search for potential victims by night. The inspiration for hundreds of subsequent remakes and adaptations, this classic film directed by Tod Browning, is the signature adaptation of Bram Stoker’s story with its eerie passion, shadowy atmosphere and thrilling cinematography.

Synopsis:                             The Wicker demon has awakened and for one unlucky group of kids, a road trip is about to turn very wrong. They find themselves separated, alone and terrified as they battle a ruthless, flesh eating creature. Who among them will survive, trapped within the Eyes of the Woods?

Synopsis:                             An unforgettable masterpiece, the original Frankenstein stars Boris Karloff as the screen’s most tragic and iconic monster in what many consider to be the greatest horror film ever made. Tampering with life and death, Dr. Frankenstein (Colin Clive) pieces together salvaged body parts to bring a human monster to life. The mad scientist’s dreams are shattered by his creation’s violent rage as the monster awakens to a world in which he is unwelcome. Featuring groundbreaking makeup by Jack Pierce, director James Whale’s adaptation of Mary Shelley’s masterpiece novel blends themes of horror, isolation and compassion, and remains one of the most shocking movies of all time.

Synopsis:                             After a divorce, Sophia moves to the south of Italy with her daughter, Helena. The new house, located inside an austere building of the fascist age, hides a mysterious closet and dark secret. After the loss of Helena’s first baby tooth, a nightmare begins that could only come from darkness. This is the tale of a mysterious woman: an angel or a witch, a little girl, charmed by the arrival of the ‘Fairy of the teeth’, and her mother.
Powerless before the transformation of an innocent children’s tale into a nightmare coming from afar, HAUNTING OF HELENA does not descend into a splatter film, but rather slides along the sharp blade of psychological fiction.

Synopsis:                             Ana and Anny live, along with their deformed brother, in the desolate countryside, after having been sheltered from society by their drug dealer father for their entire lives. One day the police come calling to investigate, and after bullets are fired and chainsaws are revved up, the three siblings find themselves on their own, and on the road. But the trio is also on the run from their father s crazed drug kingpin boss who is convinced the sisters know where his valuable supply is hidden. He sends an army of trained killers to track them down… but Costello and his gang find that they might be in for more than they bargained for when the bodies start piling up one by one.

Synopsis:                             Summer 2005, inspired by true events. David, Sarah, and Nicole leave on a trip with only a purpose, the concert of their favorite rock band. Unfortunately not everything goes as envisioned. Things get complicated when the 3 decide to stop at a gas station for fuel and get caught in a robbery. They are robbed of all their possessions. Forced to find a place to call the police, they arrive at a Market where, tired and hungry, they decide to hide for the night and sack the place, not knowing that the Market butcher slaughters not only pork and beef…

Synopsis:                             In 2007 Phillip Muirhouse was on a promotional tour to launch his book on supernatural phenomena, ‘The Dead Country’. His publishers scheduled a radio interview in Junee, New South Wales, and for the author to be filmed inside a local tourist trap, The Monte Cristo Homestead, known as ‘the most haunted house in Australia’. As part of a publicity stunt, he planned to stay inside the house for one night. The events, which took place, were recorded in real time on audio devices and high tech motion-activated cameras. By morning three people were found dead. Muirhouse was later found by police staggering along a country lane covered in blood.

Synopsis:                             Jimmy, while interning to become a psychologist, interviews Sophie for his video project at college. Sophie is a sweet girl, but she’s in a children’s home for a reason. She came from a lovely, happy family until one Christmas, as her mom and dad helped her decorate the Christmas tree, she blacked out. All she remembers is waking up to find mom and dad dead. Two years later she begins to talk about the incident but remembers it as someone else, and talks about it in a different voice. Sophie is now guided by a nefarious, external force from the other side that manifests itself in many different ways.

Synopsis:                             Looking to party, a night watchman invites his friends to the self-storage facility he works at for a wild night of girls and booze. As partiers start disappearing one-by-one, the survivors must outsmart a mastermind, whose horrifying plan is unfolding behind closed doors. Full of gore, suspense and terror, Self Storage is a twisted tale of survival with no way out.

Synopsis:                             A tongue-in-cheek psycho movie in “”Duo-vision.”” The entire feature employs the split-screen technique used in parts of Brian De Palma’s “”Sisters”” that same year. As a handyman at a seacoast hotel, Randolph Roberts wears a monster mask while he kills and dismembers women with blond hair.

Synopsis:                             Even a man who is pure in heart and says his prayers by night may become a wolf when the wolfbane blooms and the autumn moon is bright. In 1941, The Wolf Man introduced the world to a new Universal movie monster and the mythology of the werewolf was redefined forever. Featuring a heartbreaking performance by Lon Chaney Jr. and groundbreaking make-up by Jack Pierce, this story of a cursed man who transforms into a deadly werewolf when the moon is full has not only become a masterpiece of the horror genre, but of all time.

Synopsis:                             A former UN investigator is thrust into the middle of trying to stop what could be the end of the world. Worldwide destruction sends him around the globe seeking clues about what they are fighting and what it will take to defeat it, as he tries to save the lives of billions of strangers, as well as his own beloved family.

Synopsis:                             From the producers of Lost and Friday Night Lights comes the thrilling Bates Motel: Season One on Blu-ray and DVD. A modern day re-imagining of the classic film “Psycho,” Bates Motel looks at Norman Bates’ teenage years and just how deeply intricate his relationship with his mother, Norma, truly is and how she helped forge the most famous serial killer of them all. Starring Academy Award nominee Vera Farmiga (Up in the Air) and Freddie Highmore (Charlie and the Chocolate Factory), watch every spine-tingling episode back-to-back and uninterrupted of the series critics are calling, “Moody, twisty, creepy and gloriously insane” (Los Angeles Times).

Synopsis:                             Grimm is back, and delves even deeper into the unseen evils around us in all 22 “addictively entertaining” (Kristi Turnquist, The Oregonian) Season Two episodes. Now fully embracing his identity as a Grimm, Portland homicide detective Nick Burkhardt tackles even more gruesome and bizarre crimes linked to creatures of lore. With the help of his partner Hank and Wesen confidants Monroe and Rosalee, Nick must face an ancient royal bloodline linked to the mysterious Captain Renard, all while fighting to keep from losing the love of his life forever. Watch every chilling and evocative episode back-to-back and uninterrupted of the hit series critics say is “impossible not to love.” (Mary McNamara, Los Angeles Times)