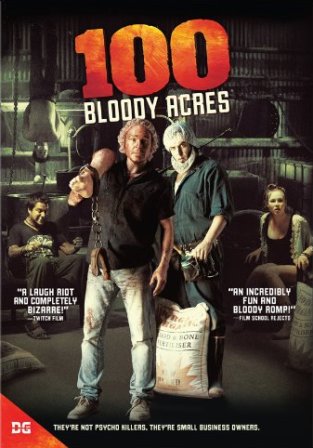 This week brings with it 34 new horror releases on DVD and Blu-ray, including:

In 100 Bloody Acres, brothers Reg and Lindsay Morgan are struggling to keep their organic blood and bone fertilizer business in motion. Their secret “recipe” for success (using dead car crash victims in their product) was a huge boon to business, but lately supply has been gravely low. Months have passed since their last find, and an important new customer is now waiting on a delivery. When junior partner Reg (Damon Herriman of Justified) stumbles upon 3 travelers stranded on a remote country road, he cooks up a radical solution to their problem, and a way of finally gaining the respect of his bossy big brother (Angus Sampson, featured in the upcoming Insidious: Chapter 2). But when Reg starts to fall for Sophie, one of the intended victims, things get complicated. A bloody good time, the Cairnes’ brothers witty horror-comedy blends sly Australian humor, gory fun, and a clever storyline that gives “recycling” a whole new context. “They’re not murderers…they’re small business operators!”

Five school friends seek adventure on Halloween night in an abandoned, haunted mine, only to find to their horror that the ghostly rumors may be true as they fight for survival.

With the psychic power of clairvoyance, an extra-sensory perception, Amy starts witnessing haunting visions as her entire Amish village begins to fall into demonic control. An ominous funeral director, Christopher, uses Amy’s special abilities to seek out the covert leader behind the possession. Amy and Christopher must stop the fall of their village before the Devil takes over Amy’s soul forcing them to perform a controversial exorcism.

Five friends head out for a week getaway to a secluded cabin just outside of the Six Rivers National Forest. When an argument forces the group apart things begin to deteriorate quickly. One by one the campers turn up dead and things are clearly not what they seem. As day breaks only two men remain – Yet what if neither man is responsible for the night’s carnage, but instead the BEAST who calls Six Rivers home…

A horde of Zombie Demons, ZEMONS are unleashed on the world after college kids unwittingly create an evil curse. This curse causes everyone that they make eye contact with to kill themselves and turn into ZEMONS! Now, they only have 24 hours to reverse the curse. Armed with a slew of homemade weapons, avoiding eye contact, dodging hicky’s and seducing Zemons, will our heroes be able to reverse the curse? The fate of the entire world rests on their shoulders, or all of humanity be Dead Before Dawn!

Synopsis:                             A true trilogy of terror! Welcome to the haunted dollhouse where 3 devilish tales of twisted horror take place. From a re-animated ragdoll that seeks revenge to a child’s doll graveyard where angry playthings come back to life – enter the world of DevilDolls!

By day Gerri Dandridge is a sexy professor, but by night she transforms into a real-life vampire with an unquenchable thirst for human blood. So when a group of high school students travel abroad to study in Romania, they find themselves ensnared in her chilling web of lust and terror. Charlie and “Evil” Ed must stop Gerri from drinking and bathing in the blood of a “new moon virgin,” which just so happens to be Charlie’s ex-girlfriend, Amy. They enlist help from Peter Vincent, the vampire hunting host of a reality show called “Fright Night,” to drive a stake through Gerri’s plan and save Amy from a fate far worse than death.

On Hallows Eve, a malicious prank leaves a young farm girl facially mutilated and emotionally scarred. Ten years later, the kids responsible for that horrific accident return to Bates Farm, but this time their sins do not go unpunished.

In the wicked performance that crowned him the movie’s master of the macabre, Vincent Price plays a renowned wax sculptor plunged into madness when an arsonist destroys his life’s work. Unable to use his flame-scarred hands, he devises a new – and murderous – way of restocking his House of Wax.

In the tradition of The House that Dripped Blood and Tales From a Crypt comes The Monster Club, starring master of horror Vincent Price (Witchfinder General, The Fly, Masque Of The Red Death).
When elder vampire Erasmus (Price) literally gets a midnight snack from horror writer R. Chetwynd – Hayes (John Carradine, The Howling), he invites him back to a local hot spot where all the guys are ghastly and the girls are ghoulish! There three spine-tingling tales unwind to the beat of rockin’ tunes from an array of pop performers.
The star-studded cast also includes Donald Pleasence (Halloween), Britt Ekland (The Wicker Man), Stuart Whitman, Richard Johnson (Beyond The Door), Simon Ward (Holocaust 2000), Barbara Kellerman (Satan’s Slave), Anthony Steele, and Patrick Magee, and features music by UB40 and The Pretty Things. Directed by Roy Ward Baker (The Vampire Lovers, Scars of Dracula) and based on stories by author R. Chetwynd-Hayes (From Beyond the Grave).  Now see it from a brand new HD master!

Synopsis:                             A private school for girls is sent into waves of horror when one of the students is found brutally murdered. Young investigator DiSalvo finds dead ends everywhere, until he discovers a startling connection between the school and a sinful villa outside of town which panders to the lascivious fantasies of rich men.

Unleash decades of monsters, maniacs, gore and more with this fright-filled collection of 100 horror classics! For decades horror films have frighten and delighted audiences by capturing their inner most fears and phobias and projecting them onto the silver screen. Honor your love of horror with this eerie array of cinematic scares, from the earliest silent films through the golden age of monster movies and beyond. Discover the darkest nights of fright and have a screaming good time with this collection of gruesome gold!

Blood drips from the walls. A terrifying chill permeates through the rooms. Menacing eyes glow from the upstairs window and inside this charming Long Island home, an unspeakable evil lurks the halls, waiting to torment all who dare enter. Experience the ultimate in haunted house films…and delve deeper into the history of the films with vintage special features and all-new special features created for this deluxe collector’s set.

Rituals of the Occult

The Face of Marble (1946): Engrossed in his mission to bring the dead back to life, Dr. Randolph fails to notice his wife Elaine’s interest in his young lab associate, Dr. Cochran. However, their old housekeeper Maria does take note and will do anything, including using her voodoo powers, to see to it that Elaine is happy. B&W 72 Min.

I Bury the Living (1958): Through a series of chilling coincidences, the newly-elected director of a cemetery (Richard Boone) begins to believe that he can cause the deaths of living owners of burial plots by merely changing the push-pin color from white (living) to black (dead) on a large wall map of the cemetery. B&W, 67 Minutes

The Four Skulls of Jonathan Drake (1959): While attending his brother’s funeral Jonathan Drake is shocked to find the head of his sibling is missing. When his brother’s skull shows up later in a locked cabinet, Drake realizes an ancient curse placed upon his grandfather by a tribe of South American Indians is still in effect and that he is probably the next victim. B&W, 70 Minutes

The Snake Woman (1961): A doctor in 1890 England, in order to cure his wife’s “sick mind”, injects her with snake venom. She later gives birth to a daughter whom the villagers call “The Devil’s Baby” and in a fit of fear they end up burning the family’s house down. Years later a Scotland Yard detective is sent to the village to investigate a rash of deaths that are caused by snakebite. B&W, 68 Minutes

Cat People (1942): Directed by Jacques Tourneur and written by Dewitt Bodeen, Cat People was the trailblazing first of Val Lewton’s nine horror classics. Simone Simon portrays a bride who fears an ancient hex will turn her into a deadly panther when she’s in passion’s grip.

I Walked With A Zombie (1943): Lewton takes the gothic romance of Jane Eyre, resets it in the West Indies and adds the overriding terror of the living dead for the screen horror classic I Walked with a Zombie. Frances Dee plays the nurse who witnesses the strange power of voodoo.

The Curse Of The Cat People (1944): Simone Simon returns in The Curse of the Cat People, a sequel in title but a landmark study of a troubled child. Dewitt Bodeen again provides the script, with Robert Wise making his directing debut, co-helming a gothic-laced mix of fantasy and fright.

The Body Snatcher (1945): Boris Karloff plays the title role in the Lewton adaptation of Robert Louis Stevenson’s The Body Snatcher. A doctor needs cadavers for medical studies, and Karloff is willing to provide them one way or another. Don’t miss his scene with fellow horror icon Bela Lugosi.