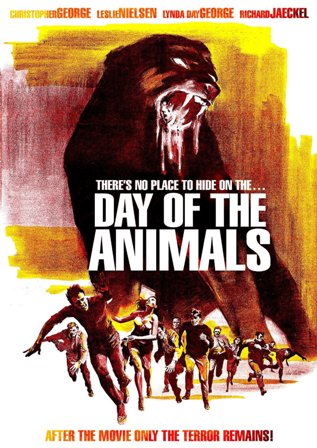 Happy Thanksgiving fellow horror fiends!  Be thankful for your family & your friends!  Eat!  Drink!  Be merry!  Watch some football or go party with your friends (but stay safe)!  Be thankful that you have at least one day off to partake in all of these activities… because you probably won’t be that thankful for this week’s meager offering of 3 new horror DVDs and Blu-rays.

The Terrifying Movie Of A World Gone Mad!

Scientists warn that the depletion of the earth’s ozone layer is reaching critical levels, particularly in higher altitudes. How critical? Enough to unleash the vengeful wrath of the entire animal kingdom! No human is safe, particularly a group of nature-loving hikers (including Leslie Nielsen, Naked Gun, Airplane; Richard Jaeckel, Grizzly; Jon Cedar, The Manitou; Lynda Day George, Pieces)) lead by their guide (Christopher George, Grizzly, Mortuary) who are constantly menaced by every conceivable mountain-dwelling creature. Dogs, rats, snakes, hawks, owls, mountain lions and bears are out to send a clear message about chlorofluorocarbon abuse.

From Sean S. Cunningham, producer-director of the original Friday The 13th, comes this electrifying tale of terror!

116 people are dead at the hands of Max Jenke (Brion James, Blade Runner, Crimewave) and his trusty meat cleaver. Now, justice is about to be served as Jenke is sentenced to the electric chair. But from the first high voltage blast, it becomes clear that Max is no ordinary serial killer.

With a blood-chilling laugh from the depths of hell, Max enters our world, transformed into a supernatural force by the high-voltage blast of electricity. Max vows revenge on the cop who captured him. Well-aware of the maniacal killer’s passion to destroy, Detective Lucas McCarthy (Lance Henriksen, Pumpkinhead, Aliens) can only begin to imagine the horror that awaits him and his family.

It’s an American Grindhouse double bill! Both for the first time digitally remastered from the original vault elements!

First up, Lurkers! From cult director Roberta Findlay (Snuff) comes a psychological thriller about a beautiful, young New York cellist, whose demonic childhood nightmares have returned, plunging her into a horrific series of events that threaten her success, her sanity…and her life. Now see the horror from a brand new 16×9 master from the original IP first time anywhere!

Next up, Die, Sister, Die! A man (Jack Ging, SSSSSSS) hires a nurse (Antoinette Bower, Prom Night) to care for his ailing but nasty and shrewish sister. What he really intends to do, however, is to convince the nurse to join him in a plot to kill her! Watch this film in its first official/authorized DVD release, from a brand new master from the original negatives, first time anywhere!