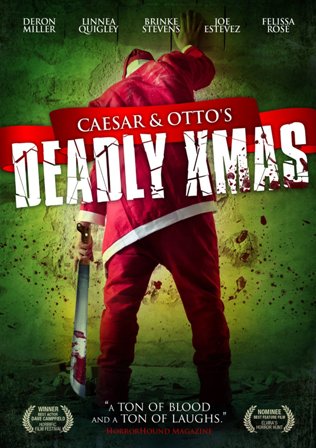 This week brings with it 15 new horror releases on DVD and Blu-ray, including:

Caesar and his half brother Otto take on duties at Xmas Enterprises as Santa and his elf. However, the bodies begin to pile up when a fellow store Santa (CKY’s Deron Miller) develops a vendetta against them, and he soon turns Caesar’s list of cancelled Thanksgiving Dinner guests into a list of Xmas-inspired victims! A cross between Scary Movie and Silent Night Deadly Night, C&O’s Deadly Xmas takes the Christmas slasher into all new gruesome and hilarious territory. Featuring cult movie icons Linnea Quigley, Brinke Stevens, Lloyd Kaufman, Joe Estevez, Felissa Rose and Robert Z’dar.

Present day. It is their senior year of college; loveable Michael (Wesley Stiller) and his beautiful girlfriend Lindsey (Lindsay Anne Hugghins) invite best friends Gisela (Angelica Santos) and Tina (Adelyne Liu) on one last hiking trip before the pressures of finals week set in. Their annoying friend Alex (Zack Gold), always the fifth-wheel, invites himself along. What starts out as a beautiful sunny day, turns into a deadly nightmare after Alex’s encounter with a strange little boy, Johnnie (Frankie Torres). With the sun quickly setting, the friends set out for home, but as they get lost on the back-roads of this remote area, their car mysteriously dies. Stranded in the middle of nowhere and with no cell phone reception, they decide it’s safer to wait until morning to find help. One uncomfortable night in the car won’t kill anyone, right? Wrong. Little do they know, not all of them will make it through the night alive. As one after another disappears into the night, the remaining friends desperately search for those who have gone missing only to stumble upon the chilling truth: little Johnnie has actually been dead for decades!

I Am Zozo is a psychological horror film about five young people who play with a Ouija board and attract the attention of the malevolent Ouija demon ZoZo. The film is based on widely reported real experiences with this ancient and malevolent spirit that attaches itself to people exclusively through the Ouija board. The film was shot last Halloween entirely on location on San Juan Island, WA and Seattle and is one of the only features in history to be shot entirely on Kodak Super 8mm negative film stock.

Filmed on location at an actual documented haunted mansion in Ireland. Local handy man Rob Walker is hired to brick up and block all entrances and windows of a secluded and abandoned mansion along the Irish coast. However as Rob makes his inspections he begins to the feel he’s not alone. Is it local kids playing a practical joke? Or a sinister force that does not wish to be disturbed. The Last Light: An Irish Ghost Story is the violently haunting tale of a (real) Ulster mansion, donated as a war hospital in the early 1900’s before turning into a retirement home for the old and wealthy. Even as a listed building, the house was left to waste, and soon became a playground for kids who destroyed the original features of the facility, upsetting not just the local people and historians, but something deep within the walls..

The Maniac Cop is back from the dead and stalking the streets of New York once more. Officer Matt Cordell was once a hero, but after being framed by corrupt superiors and brutally assaulted in prison, he sets out on a macabre mission of vengeance, teaming up with a vicious serial killer to track down those that wronged him and make them pay… with their lives! Robert Davi (License To Kill), Claudia Christian (The Hidden), Michael Lerner (Barton Fink), Laurene Landon (Hundra), Leo Rossi (Halloween II), Robert Z Dar (Tango & Cash), Charles Napier (The Silence Of The Lambs), and Bruce Campbell (The Evil Dead) star in this chilling, action-packed sequel written by Larry Cohen (It’s Alive) and directed by William Lustig (Maniac). Featuring a brand-new 4K High Definition transfer from the original camera negative, this definitive presentation of Maniac Cop 2 comes packed with exclusive Extras!
Special Features:
Audio Commentary with Director William Lustig and Filmmaker Nicolas Winding Refn
Back On The Beat – The Making Of Maniac Cop 2
Cinefamily Q&A with Director William Lustig
Deleted Scene
Theatrical Trailers
Poster & Still Gallery
Isolated Music Track
Enhanced for D-Box Motion Control Systems

It’ s the first comet to buzz the planet in 65 million years, and everyone seems to be celebrating its imminent arrival. Everyone, that is, except Regina Belmont (Catherine Mary Stewart, The Last Starfighter) and her younger sister Samantha (Kelli Maroney, Chopping Mall), two Valley Girls who care more about fashion trends than the celestial phenomenon. But upon daybreak, when the girls discover that they’re the only residents of Los Angeles whom the comet hasn’t vaporized or turned into a zombie, they do what all good Valley Girls do…they go shopping! But when their day of malling threatens to become a day of mauling, these gals flee with killer zombies and blood-seeking scientists in hot pursuit!

After being forced to visit a hypnotist, Martin receives news of his estranged mother’s passing. He returns home for the funeral, and before long, people begin dropping dead. The victims – brutally torn apart by what appears to be a predatory monster – convince the local police that Martin is somehow responsible, and soon he comes to believe it too, as all the victims are connected to the evil within him.

In October 2012, a journal is discovered that documents a series of Bigfoot sightings across the U.S. The detailed entries provide witness names, locations and testimonies of each creature encounter. In an effort to prove or debunk the journal entries, Lue Simcoe and friend Chris Gordon begin to research the data. Their search brings them to Tom Biscardi who agrees to follow the trail of sightings listed in the journal. They encounter drama, intrigue and racial tension, as well as government cover-ups. This adventure turns into a trip they will soon regret. What you watch here is a videotape record of their journey. Everything is real. There are no actors. There are no fake locations. There are no created stories.

Remington and the Curse of the Zombadings (2013)

As a child, Remington mocked his whole town by calling everyone gay. But now, a curse from one none-too pleased drag queen has turned this teen into “snaps” of fabulousness overnight. If he can’t convince a straight guy to switch orientations with him before the bell tolls, he will be gay forever. Remington finds himself torn between his new lust for his best buddy Jiggs and the affections of his previous love interest Hannah. Being gay wouldn’t be such a terrible thing but there’s an anti-gay serial killer on the loose and drag-queen zombies invading from all corners. Remington and his loyal companions will only be able to survive the night if they can learn to be true to themselves. This #1 hit film from the Philippines is full of shocking hilarious twists! Follow Remington as he sashays into an adventure that will unravel the mystery of the curse, killer, and gay zombies roaming the streets!

Unsettling events escalate into animal atrocities shortly after the Thompson family moves into their new home. Suspecting the neighbor’s son Christian is behind the disturbing events, Laura Thompson consults with a new friend, whose tales of the occult lead her to dig deep into local legends of the paranormal. Faced with a growing sense of connection to the child, Laura begins to wonder what really is “the evil that lives next door? “

It incorporates a physical acting style that draws heavily from butoh, a form of Japanese dance. A young woman suffering strange hallucinations and physical ailments discovers that she is the descendant of an ancient line of European vampires, and she and her boyfriend are soon captured by older vampires and drawn into the darkness.

Sennentuntschi: Curse of the Alps (2010)

An Alpine legend tells the story of three lonely herdsmen who were so starved of female companionship they built the girl of their dreams from a broom, some straw and a few rags. Then the Devil took pity upon them and made Sennentuntschi live and breathe…

In the wake of the battle with the Garuda, Bo finds herself experiencing strange new appetites – and increasingly evil urges. Ever loyal Lauren and the Succubus get serious about their relationship, but keeping up with Bo proves to be no easy task. Meanwhile, Kenzi continues to struggle with being human in a Fae world, Hale is named the acting Ash, and Dyson’s new partner – a Valkyrie vixen known as Tamsin – has her sights set on Bo. To make matters worse, Trick reveals that Bo’s strange behavior is a result of The Dawning, a clandestine rite of passage that determines the fate of the each and every Fae. As Bo rushes to prepare for the ritual that will decide her future, a mysterious being known as the Wanderer makes his powerful presence felt. Should Bo survive long enough to decipher the riddle of this enigmatic visitor, she may unlock the long-sought secrets of her own dark past!

The Twilight Zone: The Complete Series (Episodes Only Collection) (1964)