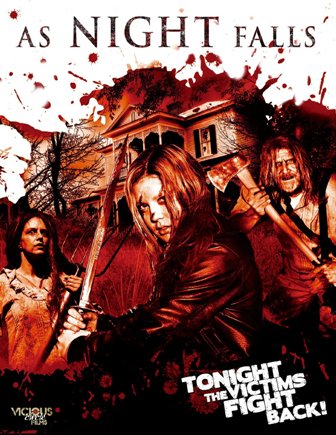 Sorry folks, another slow week – we’ve only got 7 new horror releases on DVD and Blu-ray, including:

10-year-old Amelia’s parents think it’s time for her to go to sleep permanently, leaving her broken body in a silent, shallow grave. 50 years later, Mommy and Daddy are back from Hell, intent on wreaking the same deadly discipline on anyone not in bed by nightfall. Sisters Holly and Elisabeth are losing their minds, and their friends are losing their heads. Something evil has crashed their party, but no one knows what they are fighting. When the girls’ brother Charlie arrives, he completes the family group and the kids start to find out what firm parenting really means.

The Bat, said to be a man with no face, is a master criminal involved in robberies and murders. This crazed killer is on the loose in a creepy mansion full of people and whose true identity is only revealed at the end.

Alex Datcher (Passenger 57) stars as a woman working the late shift at The Gas Station while a killer is on the loose. Then, Stacy Keach (Road Games) can’t stand the thought of losing his Hair and he’ll do anything to keep it. And finally, Mark Hamill (Star Wars) portrays a baseball player that submits to an Eye transplant after he loses an eye in a car accident.

In this dark thriller, The Family, kinfolk in a sleazy family business are shooting a pornographic masterpiece. But “art” abruptly degenerates into a snuff film. Kinky carnage full of twists and turns.

On Erin Island, an idyllic fishing village off the coast of Ireland, charming inebriate Ciaran O’Shea (Richard Coyle, Pusher) is tasked with showing straight-laced police officer Lisa Nolan (Ruth Bradley, Primeval, In Her Skin) her new beat. Not that there’s much to police, as most of the community’s troubles are caused by O’Shea himself. But strange doings are afoot: the crew of a fishing boat disappears, whales start appearing dead on the shore, and a local lobsterman catches a mysterious tentacled creature in his trap. Soon it becomes clear to O’Shea and Nolan that there s something unnatural out there, and that it’s hungry. So it’s time to rally the villagers, arm the troops…and head to the pub.

An unauthorized adaptation of Bram Stoker’s Dracula, Nosferatu is the quintessential silent vampire film, crafted by legendary German director F. W. Murnau (Sunrise, Faust, The Last Laugh). Rather than depicting Dracula as a shape-shifting monster or debonair gentleman, Murnau’s Graf Orlok (as portrayed by Max Schreck) is a nightmarish, spidery creature of bulbous head and taloned claws — perhaps the most genuinely disturbing incarnation of vampirism yet envisioned. Nosferatu was an atypical expressionist film in that much of it was shot on location. While directors such as Lang and Lubitsch built vast forests and entire towns within the studio, Nosferatu’s landscapes, villages and castle were actual locations in the Carpathian Mountains. Murnau was thus able to infuse the story with the subtle tones of nature: both pure and fresh as well as twisted and sinister. Remastered in high definition for the first time and making its Blu-ray debut exclusively from Kino Classics.

BLACK DEVIL DOLL FROM HELL: Wholesome Christian woman, Helen Black, is browsing through a local antique shop when she spots a ventriloquist doll. She is oddly drawn to the doll and decides to purchase it after being forewarned about the dolls mysterious past. Unbeknownst to her, the doll is Black Devil Doll from Hell. The devil doll comes alive and gives Helen her heartfelt wish, a wish she may soon regret!
TALES FROM THE QUADEAD ZONE
Food For?: A tale about hunger and it’s effect on one poor family and one family member’s soultion to this devastating problem! A tale you will never forget.
The Brothers: A tale of hatred and revenge of supernatural proportions. Two brothers, Fred and Ted Johnson, brothers whom have hated eachother from birth. Fred dies of an apparent heart attack. Ted Steals his body from a funeral home to carry out a strange and bizarre deed that results in a chain of evens that Ted could not have foresee in this life or the next.
Unseen Vision: A tale about Bobby, a dead little boy whom keeps brining his mother strange books to read to him…books that can’t be found in this world!