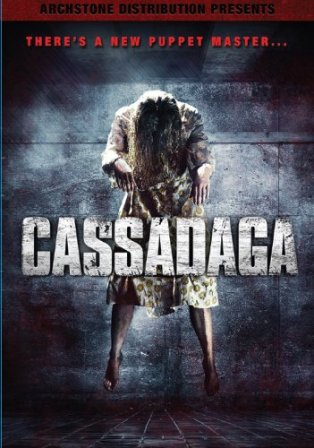 Another year is drawing to a close and this year it’s happening on a movie release day.  So if you’re not heading out to any fancy soirees and/or heavy metal vomit parties, maybe you can spend the night with one or two of these movies (or maybe start your new year off binging with one of the 20-movie collections).

Devastated by the death of her younger sister, Lily Morel seeks solace at the spiritualist community of Cassadaga. But instead of finding closure, she contacts something else – the vengeful ghost of a murdered young woman. With her life crumbling all-around her, Lily races to unravel the mysterious circumstances surrounding the woman’s death – a task that will bring her face-to-face with a sadistic serial killer known only as Geppetto.

Hell Baby, a comedy scripted by Thomas Lennon and Robert Ben Garant (Night at The Museum,Reno 911!: Miami) marks their co-directing debut. Jack (Rob Corddry) and Vanessa (Leslie Bibb) are an expectant couple that moves into the most haunted fixer-upper in New Orleans — a house with a deadly demonic curse. Things soon spiral out of control for Jack and Vanessa, as well as their-not-so-helpful neighbor F’Resnel (Keegan-Michael Key), Vanessa’s friendly psychiatrist (Michael Ian Black), Vanessa’s Wiccan sister Marjorie (Riki Lindhome) and the detectives assigned to look into the rising body count (Rob Huebel and Paul Scheer). Only the Vatican’s elite exorcism team (Garant and Lennon) san save them — or can they?

The film stars Hugo Stiglitz as the television news reporter Dean Miller who waits at a European airport for the arrival of a scientist. A military plane, exposed to radiation makes an emergency landing; blood drinking zombies emerge armed with knives, guns and teeth! They go on a rampage slicing, dicing, and biting their way across the Italian countryside.

The team behind America’s #1 Horror Festival brings you the terrifying story of a couple’s fight to escape a Satanic cult determined to complete their ritual! Detailed Synopsis: A long time ago, Tom and Lovely were married and everything was perfect. But that’s over. When Lovely kills a man after he tries to drug and kidnap her, she calls Tom for help and while cleaning up, they find a VHS tape that depicts a satanic ritual in which a woman is murdered. When they’re forced to return to the scene they discover just how far this cult will go to perform their ritual.

Sanitarium is an anthology that consists of three tales based on particular patients of a mental institution. Each tale begins with Dr. Stenson (Malcolm McDowell), the primary physician at the Sanitarium, commenting on the recent arrival of a new patient. As Dr. Stenson speaks, the individual’s story begins. SANITARIUM explores the different narratives of the insane patients – tales which led to their crazed states of minds. Starring Malcolm McDowell, Lou Diamond Phillips, John Glover, David Mazouz, Lacey Chabert, Chris Mulkey and Robert Englund.

Downtown Taipai, a sin-drenched red-light district, known as District 108, is a simmering cesspool of drugs and violence but the true horror is yet to come! A nuclear disaster spawns an insidious virus that spreads and quickly reaches epidemic proportions. The government orders an evacuation but the underworld gangs remain behind to confront the SWAT teams. When the virus mutates the gangland thugs into flesh-eating zombies that feast upon the panicked population, a single mom named Linda tries to escape with her daughter but faces an equally horrifying fate- she is abducted by a sex pervert! Will she survive the double threat onslaught of zombies and psychopath and break her chains to save her child?

First-time director Osric Taylor finally manages to get his dream film financed, Shakespeare’s Hamlet — set against the epic backdrop of the American Civil War. He heads to a small town in Louisiana to start filming when production funding suddenly dries up. Osric agrees to take up southern matron Hester Beauchamp’s offer to finance his movie as long as he throws some zombies in the film to attract a wider audience. When Hester suddenly dies mid-shoot, and with the local sheriff and ambitious news reporter Shine Reynolds hot on is trail, Osric is thrust into precarious and hilarious situations in a desperate effort to keep Zombie Hamlet alive.

THIS TITLE WILL BE RLEEASED ON JANUARY 1ST, 2014

Brace yourself for horrific happiness with 20 tales of midnight madness! Experience hours of terror and prepare to face your biggest fears with this 4 DVD collection of gruesome gold. This shocking showcase unleashes a variety of madmen, monsters and mania, enough to satisfy even the hungriest of audiences. Feed your craving for creepy classics and modern monstrosities with this spine-tingling collection!

Horror of the Zombies

Oasis of the Zombies

Revolt of the Zombies

Creature From The Haunted Sea

Cosmos: War of the Planets

The Little Shop of Horrors

Night of the Living Dead

They Came From Space – 20 Movie Collection

THIS TITLE WILL BE RLEEASED ON JANUARY 1ST, 2014

Venture into the world of Sci-Fi cinema with 20 far out films! From alien invasions to creepy creature features, this collection presents the best of the bizarre, the evilest of extraterrestrials and the most out-of-this-world movies that will surely delight fans of the strange and unknown. Fly through fantasy and discover these thrilling theatrical worlds loaded with daredevil dimensions and classic conflicts beyond our wildest imaginations. Prepare for landing with hours of out-of-this-world entertainment!

The Infinite Worlds Of H.G. Wells: Part I

End of the World

The Last Man on Earth

War of the Robots

Warriors of the Wasteland

The Day The Sky Exploded

Battle Of The Worlds

This Is Not A Test