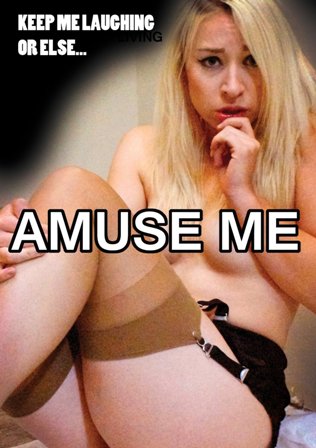 22 new releases this week, folks, including:

One year ago, Agnes Rickover attended opening night at the Bates Motel and Haunted Hayride to see her best friend Lily’s dramatic debut. A horrific accident resulted in Agnes witnessing Lily’s fiery death in a spectacle gone wrong. After a year of obsessing over a murder investigation everyone else thinks is open and shut, Agnes goes to work at the Haunt in an attempt to confront her trauma. Horrific events begin to claim the lives of her coworkers and Agnes must figure out what is behind all of the accidents before more people die.

18-year-old Michael MacCleary (the progeny of an unholy union between his mother and a swamp beast) is on the verge of becoming a man. And as the inherited evil in his blood gnaws at his soul, Michael must return to the swamp to uncover the terrifying identity of his father: before his nasty natural tendencies force him to feed on the locals! Starring Ronny Cox (Robocop), Bibi Besch (Star Trek II), Paul Clemens (Communion), L.Q. Jones (The Wild Bunch) and R.G. Armstrong (Race With The Devil).

A doomsday virus of madness and death has destoyed the world’s adult population. Only the young survive. They watch in horror as their parents go mad and die. Haunted by terrifying memories, they fight for life in a bleak wasteland. Gangs of teens and outlaw children roam the scarred landscape. Sisters Evie and Fran keep to themselves, two outsiders gathering food and moving from town to town. Sleeping overnight in an abandoned mansion, the sisters are awoken by shouts of a mob beating a lone girl. The battle between newcomers and the vicious pack spirals into a violent explosion. Teen romances, sexual jealousies and cliques inflame a grisly struggle for food. It’s the road to a grim new civilization.

Landlord Karl Gunther (Klaus Kinski , Nosferatu The Vampyre) seems like a conscientious landlord who looks out for his female tenants. What they don’t know is that he has an elaborate network of crawlspaces that he uses to watch their every move. Can a new prospective renter stop this apartment building’s rapid turnover rate…or will Gunther continue to make a killing?

In February of 1959, nine Russian hikers ventured into a remote area of the Ural Mountains. Two weeks later, all of them were found dead. What happened is a mystery that has baffled investigators and researchers for decades. It has become known as the Dyatlov Pass Incident.
When five ambitious American college students are issued a grant to return to the site of the original events, they gear up with the belief that they can uncover and document the truth of what happened to the supposedly experienced hikers. But what they find is more shocking than anything they could have imagined. Retracing the steps of the Russians ill-fated journey, the students are plagued by strange and increasingly terrifying phenomena that suggest that in spite of the desolate surroundings, they are not alone. The forces at work in the Dyatlov Pass Incident have been waiting for them.

From the writer of National Lampoons Dorm Daze, this cult favorite movie is back in all new form! Recent college graduate Herman Schumacher has just taken up residence in an apparently great house with apparently great roommates. But all is not well. Why did the roommate Herman replaced leave all of his stuff behind, as though he never really left? And why do the rest of the roommates “”assume”” he joined a cult? And why is there a makeshift tombstone with his name on it in the backyard? And what’s the deal with the monster that’s stealing Herman’s socks and living in a giant labyrinth under the house? As Herman searches for the answers he’ll learn that they can only be found on a path that leads to sex, murderous murder, hole-digging, and a BATTLE TO THE DEATH! Includes the bonus feature “Sledgehammer”.

Old St. Leopold’s Hospital has many urban legends surrounding it, but the residents of Bridgeport all agree on one thing: tortured souls roam its abandoned halls. The mystery proves too much for a pretty young student who decides to investigate for her senior class project. Unfortunately, she does not find ghosts. She, instead, finds Stanley… serial rapist, murderer, and psychopath. As the young girl becomes Stanley’s new pet, a team of young investigators descend on the hospital to “”hunt some ghosts.”” Stanley sees nothing but fun and games in his future. But, what Stanley does not know is that the hospital truly is haunted and the restless spirits there are not happy with what he has been doing.

Emily Walton, who has suffered from psychosomatic blindness ever since the car accident that took her mother’s life, must summon every instinct at her disposal to protect herself and her loved ones from a mysterious intruder the night before Halloween.

An ailing former scuba diver, who faces extremely tough times, begins experiencing otherworldly incidents. Colby (Jeremiah Sayys)suffers an accident that effects his hearing. The death of his wife causes him to become even more withdrawn. He begins to hear things his family can’t.

A different kind of American independent horror film, Toad Road from Executive Producer Elijah Wood (star of ”Lord of the Rings”) and his genre-themed production company SpectreVision is a hallucinatory and hypnotic odyssey through mutating realities, drug use, urban legends, and nightmares. Imagine a fusion between the sexually candid naturalism of Larry Clark or Harmony Korine, and the backwoods creep-out of The Blair Witch Project, and you’d be halfway there. Stuck in a dead end town, young James kills time with his druggie friends, engaging in debauched chemical intake to the point of unconsciousness, until he meets Sara, a sweet new arrival to their group. However, Sara wants James to take her further into the world of narcotics experimentation (just as James was contemplating abandoning this lifestyle)…and she also wants him to introduce her to the sinister local legend of Toad Road, a spot deep in the forest that is apparently home to the Seven Gates of Hell. Writer-director Jason Banker’s fiction feature debut is an enigmatic and unique fusion of improvisational realism undoubtedly influenced by Banker’s work as a documentary filmmaker, and otherworldly, haunting rural terror. Unlike any other film you’ll see this year, Toad Road is mesmerizing.

A private school for girls is sent into waves of horror when one of the students is found brutally murdered. Young investigator DiSalvo finds dead ends everywhere… until he uncovers a startling connection between the school and a sinful villa outside of town which panders to rich men’s fancies.

The Whip and The Body: Kino Classics Remastered Edition (1963)

Marred by controversy at the time of its release, this horror fantasy from Italy’s legendary horror director Mario Bava centers on the twisted desires of a nobleman’s son (Christopher Lee). Lee is ostracized by his father for his dalliances with a servant girl (who later commits suicide), but is allowed to return to the fold by his brother, whose lovely wife (Dahlia Lavi) immediately becomes the object of Lee’s mad lust. Lee is later found murdered, along with several other victims from the surrounding village, leading superstitious locals to believe that Lee’s evil spirit has returned to destroy them; the twist ending reveals the real evil at work. Uncut, Unrated European Version!

Abused as a child by her alcoholic father, Molly is now a dysfunctional waitress in a local seaside bar off the coast of California who casually picks up muscle men from Venice Beach and takes them home to bed… only to castrate them with a shaving razor! Shot by John Carpenters cinematographer Dean Cundy (Jurassic Park, The Thing) this cult classic from director Matt Cimber (Butterfly, Gemini Affair) stars Academy Award Nominee Millie Perkins (The Diary of Anne Frank) as the confused Molly.

Legendary action star Fred ‘The Hammer’ Williamson leads one of the last remaining ragtag group of human survivors in a zombie apocalyptic world. When his group saves a mysterious wanderer with an unknown past, they must come together to protect their outpost from hordes of flesh eating zombies and even deadly human raiders bent on their destruction. In the tradition of World War Z, Dawn of the Dead, 28 Days Later, and even some Zombieland thrown into the mix.