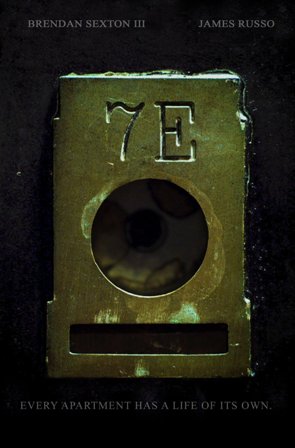 On the tenth day of Christmas, my ghoul love gave to me… 10 new horror DVDs.

Clyde (Brendan Sexton III) travels to an old New York City apartment to care for his traumatized younger cousin, Kate, (Antonella Lentini) after she discovers her roommate dead. He begins to suspect that other tenants were involved after encountering two neighbors (James Russo, Armando Riesco) who have an unusual amount of interest in Kate’s well being. As his exploration into the roommate’s death continues, Clyde’s perception of what is real and imagined begins to blur.

Mild-mannered sound engineer Gilderoy (Toby Jones, The Hunger Games, Captain America) arrives in Rome to begin work on the soundtrack to a film called The Equestrian Vortex, a tale of witchcraft and murder set inside an all-girl riding academy. Before long he finds himself entranced by the film s mysteriously terrifying allure, and the lines between reality and fantasy begin to blur. Now Gilderoy s own mind has become the battleground between his horrifying delusions and his desperate grasp on the real world. Tense, claustrophobic, and featuring a tour-de-force performance by Jones, Berberian Sound Studio is an electrifying portrayal of a man s descent into the darkest pit of madness.

The Seasoning House: where young girls are prostituted to the military. Angel (Rosie Day), an- orphaned deaf mute, is enslaved to care for them. She moves between the walls and crawlspaces*planning her escape. Planning her ingenious and brutal revenge.

Milos, a retired porn star, leads a normal family life with his wife Maria and six-year old son Petar in tumultuous Serbia, trying to make ends meet. A sudden call from his former colleague Layla will change everything. Aware of his financial problems, Layla introduces Milos to Vukmir – a mysterious, menacing and politically powerful figure in the pornographic business. A leading role in Vukmir’s production will provide financial support to Milos and his family for the rest of their lives. A contract insists on his absolute unawareness of a script they will shoot. From then on, Milos is drawn into a maelstrom of unbelievable cruelty and mayhem devised by his employer, the director of his destiny. Vukmir and his cohorts will stop at nothing to complete his vision. In order to escape the living cinematic hell he’s put into, and save his family’s life, Milos will have to sacrifice everything. his pride, his morality, his sanity, and maybe even his own life.

A young man inherits a house in which his grandfather died in a fire, that was once used as an insane asylum. When he puts it up for sale, an axe wielding madman is hiding there and threatening anyone who comes near the house. Who is this deranged murderer and why do the local townspeople act so strange?

In the 70s, Silent Night, Bloody Night was primarily a drive-in theater B movie before disappearing into obscurity. However, in the mid-1980s the film was featured on Elvira’s Movie Macabre where its exposure would begin a cult following.

Abandoned by her rich industrialist husband on a remote Caribbean estate, Paola befriends Stella, a beautiful local girl who is an adept of a hidden voodoo cult. The two women become inseparable, sharing their most intimate secrets. All goes well until Paola demands that Stella take her to one of the voodoo ceremonies that she attends every week. There Paola falls under the spell of Djamballa, the powerful snake god, from whose magic there is no escape.

As night falls in a small California town, the dead rise from its graves, mausoleums, and morgues. The townspeople must fight to survive until sunrise.

Angles From Hell: Cycle-psychos vs. the cops! A Vietnam war hero returns home and decides to build the ultimate outlaw biker gang. A war between the gang and the police is about to erupt!
Chatterbox: From the director of Hell Night and The Concrete Jungle comes a tale of a starlet whose life and career are severely altered when her reproductive organs begin to sing and talk. Starring Candice Rialson (Candy Stripe Nurses) and Rip Taylor!
The Naked Cage: Michelle and Rita are arrested for theft and placed in the same cell. Their conflicts and personality clashes lead to screaming battles and cat fights before a prison riot brings deadly violence and a newfound respect for each other. Shari Shattuck (Arena) and Angel Tompkins (The Teacher) star.
Savage Island: A group of scantily-clad female prisoners sentenced to work under brutal conditions in a South American mine revolt against their captors with the aid of a band of jewel thieves. Linda Blair (Chained Heat), Leon Askin (Hogan’s Heroes) and Ajita Wilson (Hell Penitentiary) star.

The Wild World of Bat Woman: Bat Woman and her bevy of Bat Maidens fight evil and dance.

Curse of the Stone Hand: A mysterious stone hand is causing people to kill themselves.

Man Beast: Connie Hayward mounts an expedition into the Himalayan Mountains looking for her brother who has not returned from a previous trek trying to locate the Yeti.

When Sarah, a young college freshman, joins a sorority to fit in with the popular kids, she encounters one problem: this sorority is run by a witch who knows that Sarah has supernatural powers. The witch encourages her to use her latent psychic powers to get revenge on her rivals…thus begins The Initiation Of Sarah. The all-star cast includes Kay Lenz (Moving Violation), Morgan Brittany (Dallas), Morgan Fairchild (The Seduction), Shelley Winters (The Poseidon Adventure), Kathryn Crosby (The 7th Voyage Of Sinbad), Tony Bill (Shampoo) and Tisa Farrow (Zombie).

A beautiful high school student becomes the target of a campaign of terror and eventually becomes the victim of an attack and mental torture in Are You In The House Alone? . Kathleen Beller (Dynasty), Dennis Quaid (Dreamscape), Blythe Danner (Future World), Tony Bill (Shampoo) and Robin Mattson (Phantom Of The Paradise) star in this iconic and terrifying thriller.