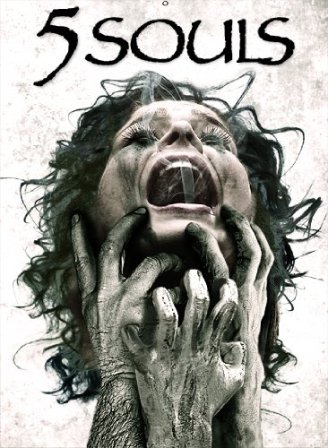 Format(s): DVD
Notable Names: Allison McAtee, Ian Bohen, Brett Donowho
Synopsis: When a disgraced architect awakens from a coma, he is confronted by an agent of evil with a proposition; kill five people to reconcile his life's misdeeds and live, or decline the offer and die. As he proceeds with his grim assignment and begins collecting the fifth and final soul, he learns that his pact may have eternally horrifying consequences…
Link: http://amzn.com/B00CS1N2S6

Format(s): DVD, Blu-ray, Combo
Notable Names: Erin Way, Eric Matheny, Jimmy Loweree
Synopsis: Expectant mother Liz wakes to find her nearly-to-term pregnancy has disappeared overnight. When doctors find no medical explanation for the loss, police treat Liz and her husband Rick as prime suspects in what has now become a missing child case. Only Rick and Liz’s brother Evan trust her version of events. As word spreads, the young couple is subjected to the unwanted attention of the police and prying neighbors. Evan feels for his sister and, as a film student, begins documenting her story, starting with a vacation to the mountains to relieve some of her grief. But as Evan continues documenting their vacation, unusual patterns arise. Evan and Rick are horrified when Liz's condition visibly declines and when the trip spins out of control they realize that whatever happened with Liz and her baby is not over. None of them are safe.
Link: http://amzn.com/B00BY8DMGQ

Format(s): DVD, Blu-ray
Notable Names: Eli Roth, Andrea Osvárt , Nicolás López
Synopsis: Chile has it all: gorgeous landscapes, smokin' hot babes, cool dudes and the wildest parties. For an American tourist, nicknamed Gringo (Eli Roth) by his two Chilean pals Ariel (Ariel Levy) and Pollo (Nicolás Martínez), the trip has been heaven on earth–except that he just can't hook up with the ladies. Gringo's luck seems to change when the group meets a trio of babes: Russian model Irina (Natasha Yarovenko), non-stop party girl Kylie (Lorenza Izzo) and her serious sister Monica (Andrea Osvárt). A night at the hottest local dance club turns into a night of terror and panic when a violent earthquake brings down paradise. Our unlucky heroes must run for their lives from looters, escaped convicts, and the inevitable aftershocks.
Link: http://amzn.com/B00D2UMHUQ

Format(s): DVD, Blu-ray
Notable Names: Caleb Landry Jones, Sarah Gadon, Brandon Cronenberg
Synopsis: Celebrity obsession has reached an all-time high, with the public now clamoring to be infected with the same diseases their idols carry. At the Lucas Clinic, Syd March sells injections of live viruses to those fans who can afford it. But Syd also has a black market trade in illness, selling viruses smuggled in his own body to piracy groups. After super sensation Hannah Geist reveals a new disease she carries, Syd is quick to capitalize on the opportunity and inject himself with some of Hannah s blood. When Hannah dies a few days later, Syd suddenly becomes the target of rival clinics and collectors and as the virus begins to destroy Syd s body, he must find a way to rid himself of it before he suffers the same fate as Hannah. A chilling look at obsession in all its most twisted forms, Brandon Cronenberg s Antiviral is a masterpiece of biological horror and a searing indictment of celebrity culture run amok.
Link: http://amzn.com/B00CERJIR8

Format(s): DVD
Notable Names: Danny Trejo, Eric Roberts, Justin Price
Synopsis: Action/horror story centered on a secret organization formed by the Catholic Church to counteract the rising number of cases of demonic possessions across the country. The story follows a young godless man who is being recruited into the cloth in order to prepare a new generation with the tools needed to stop the rise of the ultimate evil; Beelzebub.
Link: http://amzn.com/B00CTQWK9W

Format(s): DVD
Notable Names: Corey Haim, Stephen Geoffreys, Tiffany Shepis, BC Furtney
Synopsis: Holed up in a seedy hotel, Hollywood screenwriter Don Malek (Fright Night’s Stephen Geoffreys) is scripting a diabolical plan for revenge. But instead of writing about a bloodthirsty serial killer, Don is doing the dirty work with his own hands. Tiffany Shepis (Cyrus) and Corey Haim (The Lost Boys) also star in this gritty, jolting thriller where no one is safe…and checkout time is sooner than you think.
Link: http://amzn.com/B00CPTUN3I

Format(s): DVD, Blu-ray
Notable Names: Thure Lindhardt, Georgina Reilly, Boris Rodriguez
Synopsis: Thure Lindhardt (Keep the Lights On) stars in this quirky horror-comedy as Lars, a former darling of the art scene slipping away into the land of has-beens and struggling with lack of inspiration. When Lars art dealer Ronny arranges a teaching job in a small town as a therapeutic measure to stir up his creative juices, things don t quite turn out as planned. At first, life in the peaceful small town seems rosy, as he settles in and impresses beautiful fellow colleague Leslie by taking in the brawny, mute Eddie after the latter s caregiver passes away. But Lars soon discovers that the façade of serenity hides something unimaginable: Eddie suffers from a rare form of sleepwalking that transforms him from a docile, cereal-obsessed art student into a ravenous sleepwalking cannibal. Initially horrified by Eddie s dark secret, Lars becomes enthralled by the not-so-gentle giant: at long last, here s the muse he d been searching for! Exceptional art comes at a very high price…and how far is Lars willing to go for his next masterpiece?
Link: http://amzn.com/B00C5TC3HM

Format(s): DVD
Notable Names: Dustin Fitzsimons, Aaron Perilo, Nicolo Dominick Gullo, Jameel Saleem
Synopsis: Jason Petal, a student filmmaker, stumbles on a 70's era 8mm camera containing the footage of a grisly murder, and in order to film his own feature he convinces friends to break into the abandoned historic home where the tragedy occurred. Planning to scare them at every turn, he quickly realizes too late that the thing their cameras will record are their own deaths.
Link: http://amzn.com/B00BUSYU6G

Format(s): DVD
Notable Names: John Hurt, Raul Julia
Synopsis: The ultimate weapon which was meant to be safe for the mankind produces global side effects including time slides and disappearances. The scientist behind the project and his car are zapped from the year 2031 to 1817's Switzerland where he finds Dr Victor Frankenstein and his contemporaries.
Link: http://amzn.com/B00D2UMI82

Format(s): DVD
Notable Names: Tony Todd, Sally Kirkland, Kimberly Seilhamer
Synopsis: The reaper, Railroad Jack, has no mercy when it comes to torturing and slaughtering anyone who meets his eye. When a group of teens set out on a school field trip to learn about the industrial revolution, Jack has a different plan in mind for them. Ensuring the teens school bus crashes on their way back, he lures them to a nearby carnival, where he dares to pick them off one by one.
Link: http://amzn.com/B00CPKZMH4

Format(s): DVD
Notable Names: Michael Cera, Emily Browning, Juno Temple, Sebastián Silva
Synopsis: Removed from everything she's ever known, a young traveler finds herself surrounded by a group of strangers in the Chilean countryside. With tension rising, she must conquer her deepest fears and darkest secrets before her dreams become reality and her reality… a nightmare.
Link: http://amzn.com/B00CZO04WI

Format(s): DVD
Notable Names: Dougray Scott, Saffron Burrows, Jed Gregory
Synopsis: The vampire myth is given a stylish 1960s treatment, where a human cop partners with a vampire cop to stop a vamp bent on creating a war between the two "separate but equal" races.
Link: http://amzn.com/B00D3LA6TS

Format(s): DVD, Blu-ray, Combo
Notable Names: Louis Jourdan, Adrienne Barbeau, Wes Craven
Synopsis: Deep in the Florida everglades, a brilliant scientist, Dr. Alec Holland (Ray Wise), and a sexy government agent, Alice Cable (Adrienne Barbeau, The Fog), have developed a secret formula that could end world hunger. Little do they know, however, that their arch nemesis, Arcane (Louis Jourdan, Octopussy), is plotting to steal the serum for his own selfish schemes. Looting the lab and kidnapping Cable, Arcane douses Holland with the chemicals and leaves him for dead. Mutated by his own formula, Holland becomes Swamp Thing – a half-human/half-plant superhero who will stop at nothing to rescue Cable and defeat Arcane…even if it costs him his life!
Link: http://amzn.com/B00CPTUNVA

Format(s): Blu-ray
Notable Names: Bryant Haliday, Jill Haworth, Jim O'Connelly
Synopsis: From horror producer Richard Gordon (Inseminoid, First Man into Space, Fiend Without a Face, Horror Hospital) comes one of the most brutal and mysterious stories ever to be released on Blu-ray. Tower of Evil is a haunting tale set in & around a deserted lighthouse on fog-shrouded Snape Island.
Link: http://amzn.com/B00CXRTH5W

Format(s): DVD
Notable Names: Rod Serling, Bill Bixby, Burgess Meredith, Burt Reynolds, Dennis Hopper, Robert Duvall
Synopsis: This collection includes all 18 episodes from the fourth season of Rod Serling’s legendary classic television series: In His Image, The Thirty Fathom Grave, Valley of the Shadow, He's Alive, Mute, Death Ship, Jess-Belle, Miniature, Printer's Devil, No Time Like the Past, The Parallel, I Dream of Genie, The New Exhibit, Of Late I Think of Cliffordville, The Incredible World of Horace Ford, On Thursday We Leave for Home, Passage on the Lady Anne, The Bard
Link: http://amzn.com/B00CPTUN8S

Format(s): DVD, Blu-ray
Notable Names: Christian Boeving, Mike Mitchell, Marco Ristori, Luca Boni
Synopsis: A top-secret bacteriological weapon developed by the U.S. Government to create an army of super soldiers triggers an epidemic that turns the citizens of a quiet town into mutated zombies. In an effort to conceal the outbreak, a team of mercenaries is assembled to infiltrate the infected city and detonate an atomic bomb destroying the monsters and all the evidence along with them. No one has to know the truth…unless the mission fails.
Link: http://amzn.com/B00D3XMI5G