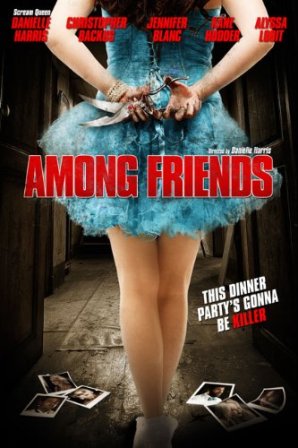 This week brings with it 15 new horror releases on DVD and Blu-ray, including:
12 Movies
2 TV Series
1 Collection

Format(s): DVD
Notable Names: Alyssa Lobit, Jennifer Blanc, Danielle Harris
Synopsis: Good times take a dark turn when longtime friends get together for an '80s-themed murder-mystery party that is soon hijacked by someone from their past. The dinner guests will have to face their lies and secret betrayals as they discover the terrifying lengths to which their host will go to expose the truth.
Link: http://amzn.com/B00D920HT0

Format(s): Blu-ray
Notable Names: Barry Fitzgerald, Walter Huston, Rene Clair
Synopsis: Ten people, strangers to each other, are invited to a lavish estate on an island. Through a recording, their mysterious host accuses each of his guests of murder and proceeds to exact justice. The tension mounts as, one by one, the number of people are reduced through the ingenious plotting of the unseen killer. Finally only two are left and each is uncertain as to whether or not the other is the murderer.
Link: http://amzn.com/B00CBVWWKM

Format(s): Blu-ray
Notable Names: Dolph Lundgren, Brian Benben, Craig R. Baxley
Synopsis: Detective Jack Caine (Dolph Lundgren, Joshua Tree, The Expendables) thought he’d dealt with every kind of crime on earth. But now, someone is using human bodies to manufacture narcotics. Someone, or something, not of this world. To the Alien that has arrived on earth, humans represent ideal drug factories because of our endorphins. To detective Caine, the Alien represents mankind’s worst threat. If the alien’s mission succeeds, our planet will be destroyed. Which is bad. Together with his straight-arrow FBI partner (Brian Benben, Private Practice) and his girlfriend, the city coroner (Betsy Brantley, Deep Impact), Caine is going to send this alien home in pieces! Kaboom!
Link: http://amzn.com/B00CPTUNZG

Format(s): DVD
Notable Names: Lala Hensley, James Adam Lim, Pearry Teo
Synopsis: Sarah, a teen with a history of mental illness, has a jarring premonition of her friends' impending deaths one night at a sleepover. As her houseguests begin to turn murderously against each other, Sarah must determine whether her visions represent the preventable or the inevitable… or something entirely more sinister.
Link: http://amzn.com/B00CSW09BI

Frankenstein And The Monster From Hell (1973)

Format(s): DVD
Notable Names: Peter Cushing
Synopsis: Baron Frankenstein is dead, right? That's precisely what he wants folks to think. He's had it up to here with a public that doesn't appreciate the trouble a mad scientist goes through to snatch good body parts. To carry on his work, he holes up in a place where the possibilities are utterly maddening: a home for the criminally insane. A hand here. A brain there. True to form, the Baron (Peter Cushing) keeps his gruesome creation (David Prowse, widely known for his later portrayals of Darth Vader) in stitches in this sixth and final frightfest in Hammer Films' Frankenstein cycle.
Link: http://amzn.com/B00ER0QK0S

Format(s): DVD
Notable Names: Zohra Lampert, Barton Heyman, John D. Hancock
Synopsis: Finally released from an institution after suffering a nervous breakdown, Jessica (Zohra Lampert, Opening Night, Stanley & Iris) seeks the tranquility of a secluded home in Connecticut to help make her recovery complete. But, instead of a restful recuperation with her husband Duncan (Barton Heyman) and a close friend (Kevin O'Connor) in the New England countryside, Jessica soon finds herself falling into a swirling vortex of madness and the supernatural. And an even more unsettling discovery is that the entire region seems to be under the influence of a mysterious woman the trio finds living in the supposedly empty house. Jessica's fear and dread only intensify when she discovers that the "undead" girl, Emily, tragically drowned long ago, on her wedding day. Is she back to take vengeance…and scare Jessica to death?
Link: http://amzn.com/B00ER0QHEC

Format(s): Blu-ray
Notable Names: Michael Moriarty, Candy Clark, Larry Cohen
Synopsis: Its name is Quetzalcoatl, a dragon-like Aztec god that is summoned to modern-day Manhattan by a mysterious cult. But just call it Q…because that is all you’ll be able to say before it tears you apart! Roosting within the top of the Chrysler Building, this fearsome monster begins raining blood, from the bodies of window washers, construction workers and rooftop sunbathers alike, onto the streets of New York!
Link: http://amzn.com/B00CPTUNWO

Format(s): DVD, Blu-ray
Notable Names: Riz Ahmed, Kate Hudson, Mira Nair
Synopsis: Based on the international bestseller, The Reluctant Fundamentalist is both a gripping thriller and a fascinating look at the post-9/11 world. Kate Hudson (Glee, Something Borrowed), Kiefer Sutherland (24, Touch) and Liev Schreiber (X-Men Origins, Repo Men) lead a powerful cast in the story of a young man caught in the middle of an unfolding international crisis. When an American academic in Pakistan is kidnapped by anti-American radicals, the CIA thinks popular young Pakistani professor Changez (Riz Ahmed, Trishna) is involved. But as Changez tells his remarkable story about his life in the US – including his rising career on Wall Street and passionate relationship with a beautiful New York artist – to an American foreign correspondent, the truth becomes harder to pin down.
DVD Link: http://amzn.com/B00CERJIOG
Blu-ray Link: http://amzn.com/B00CQRNLLA

Format(s): DVD
Notable Names: Rio Dewanto, Aridh Tritama
Synopsis: During a vacation in the woods, a man tries to find his family who mysteriously disappear, while being hunted by a sadistic killer. His only clues are several alarm clocks which seem to tell him about a deadline to something he doesn't know. Full of gripping terror and featuring a shocking twist, Ritual is a thrill ride not to be watched alone.
Link: http://amzn.com/B00D39UQ9U

Format(s): DVD, Blu-ray
Notable Names: Christian Slater, Brendan Fehr, Roger Christian
Synopsis: When the isolated U.S. military moonbase is bombarded by a rogue meteor storm, Colonel Gerard Brauchman (Christian Slater) and his small crew are cut off from Earth with their life support failing. Before long, the crew discovers the meteors harbored alien spores…and they’re replicating. Now a vicious, shape-shifting predatory life form is loose inside the crippled facility, picking off victims one by one. Locked in a desperate fight for survival, Brauchman and the terrified remaining astronauts have one final mission…keep the creature from escaping the moon and finding a new food supply on Earth.
DVD Link: http://amzn.com/B00CPTUO3W
Blu-ray Link: http://amzn.com/B00CPTUN7Y

Format(s): DVD, Blu-ray
Notable Names: Andrew Lincoln, Sarah Wayne Callies
Synopsis: In this uncertain world, Rick Grimes (Andrew Lincoln) and his band of survivors must not only fight the dead, but also face a whole new fear: the living. In this 16 episode season, the series Entertainment Weekly called the “greatest thriller ever produced for television”, Rick and his fellow survivors continue to seek refuge in a desolate and post-apocalyptic world and soon discover that there are greater forces to fear than just the walking dead. The struggle to survive has never been so perilous. This season also introduces new characters, including the Governor (David Morrissey) and fan-favorite Michonne (Danai Gurira), along with her zombie pets.
DVD Link: http://amzn.com/B009NH6AOQ
Blu-ray Link: http://amzn.com/B009NH6JRE

Format(s): Blu-ray
Notable Names: Andrew Lincoln, Sarah Wayne Callies
Synopsis: In this uncertain world, Rick Grimes (Andrew Lincoln) and his band of survivors must not only fight the dead, but also face a whole new fear: the living. In this 16 episode season, the series Entertainment Weekly called the “greatest thriller ever produced for television”, Rick and his fellow survivors continue to seek refuge in a desolate and post-apocalyptic world and soon discover that there are greater forces to fear than just the walking dead. The struggle to survive has never been so perilous. This season also introduces new characters, including the Governor (David Morrissey) and fan-favorite Michonne (Danai Gurira), along with her zombie pets.
Link: http://amzn.com/B00CATONCA

Format(s): DVD
Notable Names: Zacherley, Bela Lugosi, David Bergman
Synopsis: His 500 year lease has expired, and it s time to move out of the castle. So join legendary horror show host, Zacherley, as he cleans out his private dungeon film vault and lets loose the wildest collection of horror and science fiction clips ever seen. Enjoy condensed, mini-movie versions of films like Screaming Skull, Santa Claus Conquers the Martians, Devil Bat, The Snow Creature, Killers from Space, the infamous Glen or Glenda, the unbelievable King of the Zombies and many more! Plus rare footage of Lon Chaney, Bela Lugosi, and Boris Karloff, zany monster outtakes, and crazy movie trailers. It s almost three hours of Horrible Horror from over 75 vintage films, movies and TV Shows!
Link: http://amzn.com/B00DTECHWS