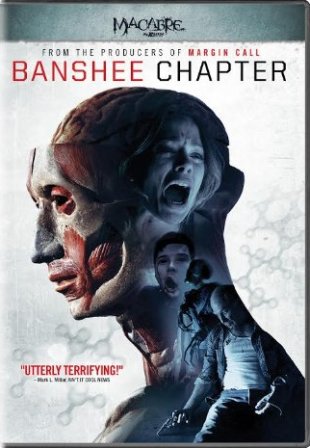 We have 13 movies coming our way in this week’s DVD and Blu-ray release round-up.  It looks like Witchboard and Night Of The Demons have finally made their way onto Blu-ray.  Additionally, some classic luchadore horror featuring Santo and the Blue Demon has been released on DVD.

The Banshee Chapter centers on a young, female journalist (Winter) who follows the mysterious trail of a missing friend (McMillian) that had been experimenting with mind-altering chemicals developed in secret government drug tests. Levine plays the role of a rogue counter-culture novelist with a penchant for substance abuse and firearms who leads the journalist into the mystery of dangerous chemical research. A fast-paced blend of fact and fiction, the film is based on real documents, actual test subject testimony, and uncovered secrets about covert programs run by the CIA.

In World War II, Stalin created a top secret nerve gas, which went missing shortly after the Battle of Stalingrad. Over seventy years later, the horrific biochemical weapon resurfaces in modern day Bulgaria, turning the local inhabitants into frenzied mutants and causing the dead to rise from the grave. Amidst the chaos, US Special Forces Captain John McGahey (Paul Logan) and NATO Doctor Ana Bennett (Manal El-Feitury) must escape the infected zone before the Code Red alert is raised and everything is destroyed. Now it s survival at all costs…
Bonus Features: Making-of Featurette, WWII Uncut, Behind-the-Scenes & Outtakes.

Three friends looking for a night of fun decide to stay in a supposedly haunted house. Several days later Candace finds herself in the midst of strange happenings. When she calls on her friend for help, it’s up to her to seek the answers.

When a high school senior discovers her teacher is seducing her boyfriend, events turn deadly after the teacher tries to cover it up.

If you’ve ever longed for a movie about wrestling women who take on various monsters, this is it! Xochitl, the mummy, can turn into a snake or a bat, which is difficult to get half-Nelsons on. Loreita, the Golden Ruby, joins her sister to battle the evil Prince Fugiyata and her Oriental female wrestlers. The mummy is also female and on the good side of the struggle.

A serial killer roams the streets of Atlantic City killing prostitutes with ruthless efficiency. His motives are unknown, but the killers most recent clue lets the two homicide detectives know that they are in a race against time before he murders #11. With no leads and luck against them their worst nightmare comes true when the killer decides to turn his last victim into a deadly game of cat and mouse for the police…

It’s Halloween night and Angela is throwing a party…but this is no ordinary Halloween party. Everybody’s headed to Hull House, a deserted funeral home, formerly the home of a mass murderer. But when the partygoers decide to have a seance, they awaken something evil…and these party crashers have a thirst for blood. Now it’s a battle for who can survive the night in Hull House.

Santo and the Blue Demon are recruited by the local police to help in a perplexing investigation into a series of unusual murders. The evil genius behind them is none other than Dr. Frankenstein’s grandson Irwin (Jorge Russek). The cigar chewing Irwin is experimenting with brain transplants and plans on creating a private army of radio controlled zombies.

A mad female scientist needs Santo’s blood for a youth serum; and she has Frankenstein’s reliable old monster to help her get it.

The good and noble El Santo, professional wrestler and crimefighter, teams up with his best buddy, the Blue Demon, to battle the newly risen Dracula and his gold disco-shirted sidekick, Rufus Rex the Werewolf!

If you’re going to cheat on your lover, don’t get caught. And if you do get caught, you’d better hope your lover isn’t secretly insane. Kevin (Billy Zane of Titanic) learns the hard way when his girlfriend Sadie (AnnaLynne McCord of 90210) discovers that he’s having a scorching affair with her best friend (Viva Bianca of Spartacus). Now Sadie has planned a romantic weekend getaway for just the three of them, complete with terror, torture and twisted psychosexual games. The trap is set. The party has begun. And tonight, hell hath no fury like a woman Scorned.

After being left at the altar 5 years ago, ex-beauty queen Farrah Adjani has receded into her own world. She lives at home in an apartment shared by her mother and aunt, and rarely comes out of her room. She spends her time flipping through the 24-hour news cycle and feeding her obsession with Jackson Miles, a recently convicted serial killer. Everything changes when her overbearing drunk of a mother returns home from her date, flashes a ring, and announces ‘Mommy’s getting married!’ Thrown into a tailspin, Farrah makes a drastic move to get noticed by Jackson Miles. She wants to learn everything Jackson knows about murder. Farrah never could be the perfect daughter, but can she be the perfect killer? On her mother’s wedding day, she’s planning to find out!

It’s called a Ouija Board and it’s been used for thousands of years to communicate with the souls of the afterworld. For beautiful Linda Brewster (Tawny Kitaen, Bachelor Party), it brings the playful ghost of a dead ten-year-old boy. But when the friendly spirit develops a sudden taste for violent murder and demonic possession, Linda’s boyfriend (Todd Allen, Django Unchained) and her former lover (Stephen Nichols, House) must race to destroy the ferocious portal of the damned.

Kathleen Wilhoite (Road House) and Rose Marie co-star in this chilling thriller from Kevin S. Tenney (Night Of The Demons).