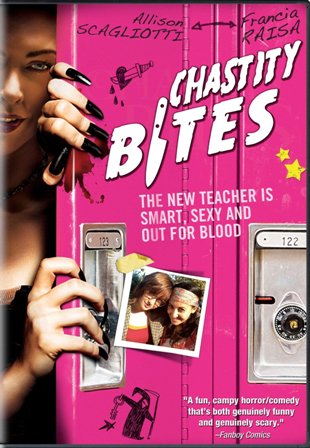 We’ve got 15 new releases on DVD and/or Blu-ray this week, ladies and gentleman.

In the early 1600’s Countess Elizabeth Bathory slaughtered more than 600 young women , believing if she bathed in the blood of virgins that she would stay young and beautiful forever. Still alive today, she’s found a perfect hunting ground for her botox as an abstinence educator in a high school . Will the brave young teen feminist blogger and journalist for the school paper finally put an end to the Blood Countess’s reign of terror and save her friend from being the next victim.

Based on the Jersey Shore attacks of 1916, a string of mysterious deaths begin to plague a small desert town. The events attract the attention of Professor Steven Miller (Richard Keats). At first, Sheriff Ross (Terry Arrowsmith) claims the incidents are the result of mountain animals – but the circumstances don’t add up, and Miller is skeptical. With a shark sighting by a town drunk, and a chewed-up body that has washed ashore, Steven must convince the doubtful law enforcement that the waters of Laughlin, Nevada have been invaded by a twelve-foot great white shark.

Abigail Breslin (Ender’s Game, Zombieland) stars in Haunter, a unique take on the traditional haunted house story from director Vincenzo Natali (Splice, Cube). In 1986, teenager Lisa (Breslin) and her family died in their home under sinister circumstances. Unable to move on, their spirits continued to roam the house during the intervening years. Now, over a period of six days , Lisa must reach out from beyond the grave to help her living counterpart Olivia avoid the same fate that Lisa and her family suffered long ago. Uniquely unsettling and shocking, Haunter is a one-of-a-kind reverse ghost story that chills long after the final frame.

Mild-mannered Walter Fletcher discovers the perfect antidote to marriage to an ambitious, attractive wife is getting his name in the papers… even if it means he has to kill a person or five.

A serial killer roams the streets of Atlantic City killing prostitutes with ruthless efficiency. His motives are unknown, but the killers most recent clue lets the two homicide detectives know that they are in a race against time before he murders #11. With no leads and luck against them their worst nightmare comes true when the killer decides to turn his last victim into a deadly game of cat and mouse for the police…

When three friends go hiking, jealousies, sexual tensions and strained relationships come to a head, turning what should have been a peaceful camping adventure into a terror trip. As collective paranoia reaches fever pitch it becomes clear that there is a much darker force at work in their ancient eerie surroundings. Who or what is after them? And can any one of them survive a night in the woods?

Independent underground filmmakers Mike Masters and David J. Francis (playing themselves) are eager to complete the third film in their ZOMBIE NIGHT film trilogy, a series of rather unsuccessful low-budget, shot-on-video gore fests. The problem, however, is a recent zombie apocalypse has taken over the world since their series began. The dead are rising from their graves and eating the living… for real this time! Masters and Francis embark on the production of their newest masterpiece anyway, only to discover shooting in a post-apocalyptic world offers many unforeseen challenges. Instead of giving up, they decide to capitalize on the cannibalistic catastrophe. No need for latex and fake blood when there’s an entire world of flesh eating undead to add realism to their film, and help save money on special effects costs! Touching upon the real-life headaches of low-budget filmmaking, with numerous nods to the zombie film genre, Reel Zombies is a satirical mockumentary feature that dives head-first into self-parody and an improbable but inspiring lesson in film craft proving that passion and dedication can overcome all obstacles even the ones that want to chomp your brain out! (Simon Laperrière, Fantasia Film Festival).

After delivering his first sermon, a new Reverend is visited by a beautiful young woman who suddenly attacks him, biting his throat. He survives the attack, but awakes with an unknown, uncontrollable thirst. As the Reverend becomes more familiar with his congregation and the wider community, he realizes that it is suffering under a wave of drugs, prostitution and violence, and decides to use his new-found bloodlust to good use.

A young woman is questioned by the police and the judges, suspected of being a modern day witch. The girl who shared her apartment has been found dead, and a pair of scissors impaled through her heart, as she lay attached to the bedposts. Apparently, the girl does have powers, to make all people around her fall prey to her spell, glissing progressively into desire, lust and the unknown.

Stitch follows the story of grieving parents as they cope with the loss of their young daughter. At the height of their desperation, they turn to their best friends for healing advice, who lead them into the deep desert for a weekend ritual meant to burn away emotional baggage. Unfortunately, the amateur ritual goes awry and cosmic forces are unleashed, revealing something sinister ravaging each person with a progression of gruesome, medieval surgical scars. As the stitches rip skin and tear apart relationships, a battle for survival ensues, forcing the couples to come to terms with loss, betrayal, love and hope.

After an ill-fated weekend of gambling in Las Vegas, four friends on the run from a loan shark find themselves stranded in the Nevada desert. But debt troubles may be the least of their worries when the group discovers that something unearthly may be stalking them. Director Jason R. Miller s Unidentified cleverly mixes sci-fi suspense with comedy to create a truly unique take on an otherworldly encounter.

Crimes you can’t believe and psychotic killers you never expected. This eight-film collection of ripped-from-the-headlines true stories will chill you to the bone.
DC SNIPER’S WIFE: The true story of John Allen Muhammad, The D.C. Sniper, as told by his ex-wife Mildred.
WINTER OF FROZEN DREAMS: A bright student-turned-prostitute (Thora Birch) must outsmart the men who control her in this ripped-from-the-headlines thriller.
VIDEO VOYEUR: In this true story, Susan Wilson (Angie Harmon) discovers that her overly-friendly neighbor planted cameras in her home, capturing her most intimate moments on tape.
SNAP DECISION: A mother (Mare Winningham) finds herself on trial when her photographer friend (Felicity Huffman) takes partially-nude pictures of her young children.
ANN RULE PRESENTS: THE STRANGER BESIDE ME: A chilling adaptation of Ann Rule’s best-selling novel in which she recounts her friendship with one of America’s most notorious serial killers, Ted Bundy.
THE AMY FISHER STORY: Drew Barrymore stars as Amy Fisher in the scandalous true story of the Long Island Lolita.
THE ELIZABETH SMART STORY: With never-before-revealed details, The Elizabeth Smart Story unfolds as one of the most remarkable, emotional and bizarre true crime stories ever told.
SPECK: The true story of Richard Speck, a serial killer who raped and murdered eight young nursing students in Chicago.

AS the constraints of censorship began to see in the late 1960’s and early ’70’s, visionary French filmmaker Jean Rollin created a series of mesmerizing thrillers that injected the Gothic vampire film with a more contemporary strain of eroticism. Fluctuating between visual poetry and shocking violence, Rollin’s deeply personal films have come to be recognized as classics of the horror genre, and are presented here in deluxe editions, mastered in HD from the original 35mm negatives, and accompanied by printed essays by Tim Lucas (Video Watchdog).

Dr. Jekyl vs. The Werewolf, Dracula Blows His Cool