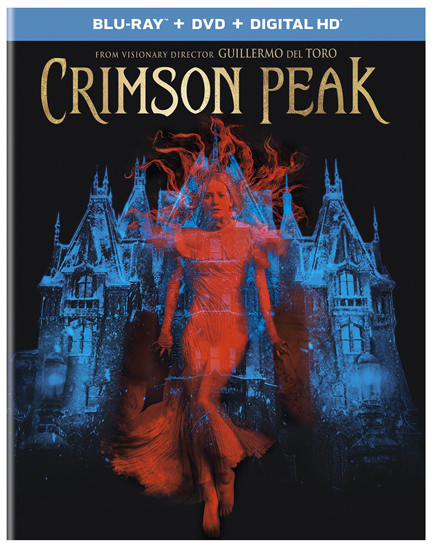 Synopsis: When her heart is stolen by a seductive stranger, a young woman is swept away to a house atop a mountain of blood-red clay— a place filled with secrets that will haunt her forever. Between desire and darkness, between mystery and madness, lies the truth behind Crimson Peak. From the imagination of director Guillermo del Toro (Pan’s Labyrinth) comes a gothic romance masterpiece starring Tom Hiddleston, Jessica Chastain, Mia Wasikowska and Charlie Hunnam.

A Lizard In A Women’s Skin [Blu-ray]

Synopsis: Mondo Macabro is very proud to present A Lizard In A Women’s Skin, released in HD on Blu-ray for the very first time in North America.

Carol Hammond, the frustrated wife of a successful London lawyer, is having bizarre, erotic dreams about her uninhibited neighbor, Julia Durer, who presides over noisy, sex and drug filled parties in the house next door. One night, Carol’s dreams culminate in violent death and she wakes to find her nightmares have become reality – Julia has been murdered and Carol is the main suspect. This frightening discovery is just the beginning of a labyrinthine psycho sexual shocker which takes the viewer on a wild ride through a series of frequently breathtaking set pieces that set new standards for the Italian thriller.

This first US Blu-ray release of the film, taken from the original negative, is the longest uncut version currently available and it comes with a host of exclusive extras. Directed by controversial film maker Lucio Fulci (The New York Ripper, House by the Cemetery, Zombie), Lizard in a Woman’s Skin is considered by many critics to be his finest achievement.

Synopsis: In Freaks of Nature, we welcome you to Dillford, where three days ago, everything was peaceful and business as usual: the vampires were at the top of the social order, the zombies were at the bottom, and the humans were getting along in the middle.  But this delicate balance was ripped apart when the alien apocalypse arrived in Dillford and put an end to all the harmony. Now it’s humans vs. vampires vs. zombies in all-out, blood-sucking, brain-eating, vamp-staking mortal combat – and all of them are on the run from the aliens.  It is up to three teenagers – one human, one vampire, and one zombie – to team up, figure out how to get rid of the interplanetary visitors, and try to restore order to this “normal” little town.

Synopsis: Returning from vacation, the Miller family find their home has been broken into. After cleaning up the mess they continue with their lives, shaking off the feeling of being violated. But little do they know the nightmare has just begun.

Synopsis: Nutbag is the terrifying, true-life story of a man who murders without provocation. A lonely depraved killer stalks beautiful women in Las Vegas, where he kills at random. There seems to be no end to his madness. Nutbag welcomes viewers to enter the mind of a psychopath, feel his pain, and follow him in his daily life, watching as the blood flows. Massacre Video presents Nutbag, the first feature-length film from genre master Nick Palumbo, the director of the controversial 35mm epic Murder-Set-Pieces. Boasting an all-new transfer created from the original Nutbag master, this release is essential viewing for fans of confrontational cinema.

Day 1. Italy. In a funeral home. The owner of the agency, the hearse driver and the make-up man are forced to deal with an epidemic spread by cocaine. Soon, the corpses ready for the burial wake up in their coffins.

Day 1466. When the epidemic already devoured the whole country, an American soldier and a pregnant woman are surrounded by zombies in a cabin in the woods. When the woman gives birth to her baby, the man understands that he has no more chance for survival.

Day 2333. The country is divided in two factions. Some of our characters preserved themselves. Some… remained human beings.

Zombie Croc: Evil Has Been Summoned

Synopsis: A team of researchers and a mysterious hunter known only as ”Crocodile Jack” venture into the swamp to battle a monstrous resurrected swamp beast that has been mutilating and devouring town locals. As they venture deeper into the swamps losing team members to the gigantic carnivorous undead reptile, they discover that a Voodoo Priest has been orchestrating the resurrection of not only the vicious ancient creature, but a horde of flesh eating zombies as well. It will take much more than big guns and brawn to stop the ZOMBIE CROC!

Synopsis: Jack, an up-and-coming Hollywood actor, sells his soul to Satan and returns home after he is unable to fulfill his end of the pact. After being attacked by hooded men, Jack meets up with his old childhood friend, who is now priest named Father Aaron. Together, the two must now fight the forces of evil, battling demons, psycho killers, and even zombies! Massacre Video is proud to present the Michigan-lensed splatter thriller Back from Hell, directed by Matt Jaissle (The Necro Files, Legion of the Night, and Revolution 666), in an all-new, director’s-approved edition!

Synopsis: Red Krokodil tells the story of a man meant to represent all men. It is the story of a man addicted to Krokodil , that suddenly finds himself alone in a post-nuclear city similar to Chernobyl. His physical decay, caused by the massive intake of drugs, is mirrored in his inner world, as reality mixes with hallucinations. The result is a film that uses the Krokodil as a metaphor of destruction.

This movie deals with many themes, from the environment to the use of drugs, but the story is just an excuse that director Domiziano Cristopharo uses to focus on a psychological condition that brings a total detachment from oneself and from the surrounding world. A dark trip that shows no way out.

Pennywise Returns in New Set Photo from ‘IT Chapter 2’

Photo Leaks of Grown-Up Losers’ Club on Set of ‘It: Chapter 2″

Jessica Chastain Linked to ‘IT’ Sequel