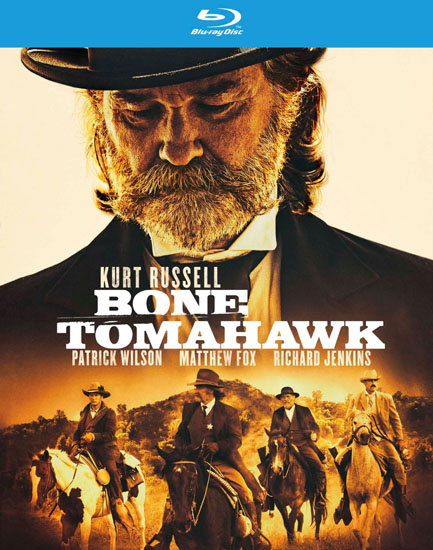 We have also included last week’s releases since there were so few this week and because we did not get around to posting them last week.

Synopsis: When a group of cannibal savages kidnaps settlers from the small town of Bright Hope, an unlikely team of gunslingers, led by Sheriff Franklin Hunt (Kurt Russell), sets out to bring them home. But their enemy is more ruthless than anyone could have imagined, putting their mission – and survival itself – in serious jeopardy. Kurt Russell (The Hateful Eight, Tombstone) leads an all-star cast, including Patrick Wilson (Insidious), Matthew Fox (“Lost”) and Richard Jenkins (The Visitor) in this gritty, action-packed thriller chronicling a terrifying rescue mission in the Old West.

Some Kind of Hate

Synopsis: Relentless bullying has turned Lincoln’s life into a nightmare. But he soon learns the true meaning of terror when he is sent to a remote school for troubled teens and the harassment starts all over again. Only this time, someone is watching – a teenage girl named Moira who was driven to suicide by vicious bullying years ago. When Lincoln accidentally summons Moira from the grave, he unleashes a vengeful and unstoppable force on a mission of blood-soaked revenge. Hell on earth has a new meaning in this gruesome shocker “guaranteed to please any and every type of horror fan” (Fangoria).

House of the Witchdoctor

Synopsis: Evil unleashes havoc and murder upon Leslie Van Hooten (Callie Stephens), a beautiful young girl, and her unsuspecting fellow grad students as they make their way to her family’s absurd and remote estate. Peter (Bill Mosley) and Irene Van Hooten (Leslie Easterbrook), the young girl’s mother and father, leave the group alone for the weekend, so that Leslie may mourn the anniversary of her boyfriend’s shocking murder. But the peaceful weekend soon turns into chaos when the students find themselves being savagely terrorized by Cliff Rifton (Allan Kayser), a crazed, recently-released career criminal, and Buzz Schenk, his drug addict sidekick, who are hell bent on a torturous killing spree. But as the terrifying acts begin to unfold, the killers soon realize all is not as it seems. And when some strangers from the neighborhood show up, the tables are turned. Now everyone is trapped inside and, as the body count begins to rise, it seems that death is now the only real escape from the “House of the Witchdoctor.”

Synopsis: The Coltrane family’s life has been wrecked by an untimely death. Widow Helen Coltrane, (Melora Walters, “The Butterfly Effect”) and her teenage son and daughter are given shelter by her isolated and quirky gun-loving brother-in-law. As they confront the reality of their shattered, altered lives and twist of fate, coincidence steps in with a seemingly lovely foster child who appears proclaiming a story that Helen’s husband had pledged to take her in. But when they do, a ghastly story of deception unravels. Co-starring William Mapother, (“The Grudge”).

This Blu-ray edition comes with exclusive cast and crew interviews.

Synopsis: Herman, (James DuMont, “Dallas Buyers Club”) has been searching for the perfect girl, but all he has collected are chunks of hair; a severed finger; a jar of blood until the seductive and beautiful Rudy, (Michelle Tomlinson,”Itch”). Refusing to play along in his twisted game, Rudy is trapped in a wooden cage with only her wits against his savage, deadly insanity. Will she win the desperate, hallucinatory game of cat and mouse and escape through the cellar door, or die trying?

Synopsis: AN ANTHOLOGY OF TERROR!

A pack of cigarettes, a video game, a pick-up truck and a stately colonial home all become key elements in four terrifying tales of terror in the anthology film, Nightmares, directed by Joseph Sargent (The Taking of Pelham One Two Three, White Lightning).

A chain-smoking homemaker (Cristina Raines, The Sentinel) insists on going out for cigarettes even when an escaped madman is on the loose in “Terror in Topanga. “,

J.J. Cooney (Emilio Estevez, Young Guns), a video game hot-shot, dares to take on a strange challenger (though it may cost him his life) in “The Bishop of Battle. “,

A troubled priest (Lance Henriksen, Aliens) seeks to find the faith he has lost on the road, but instead he finds someone (or something) in this desert is trying to drive him out of his mind in “The Benediction. “,

Claire (Veronica Cartwright, Alien) hears rats in the walls. Her husband (Richard Masur, The Thing) believes he can take care of the problem with a few rat traps, but this problem is only going to get much bigger in “Night of the Rat.”

The Brain That Wouldn’t Die

Synopsis:  A doctor experimenting with transplant techniques keeps his girlfriend’s head alive when she is decapitated in a car crash, then goes hunting for a new body.

-Alternate Scene from the International Cut

Synopsis: Are you ready for a lockdown? The Ghost Adventures crew set out to investigate the scariest, most notorious, haunted places in the world where they do not always come out unscathed.