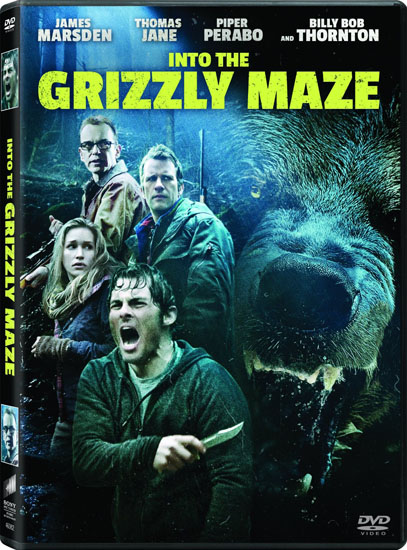 Into the Grizzly Maze

Synopsis: James Marsden, Thomas Jane, Piper Perabo and Academy Award® winner Billy Bob Thornton (Sling Blade, 1996) star in this action-packed adventure set in the Alaskan wilderness. After a relentless grizzly starts to wreak havoc on a small town, the sheriff heads into the forest to find his ecologist wife but instead crosses paths with his estranged, ex-con brother. They soon find themselves on the run from the massive killer bear. The hunted become the hunters in this edge-of-your seat thriller about the power of nature and the smell of blood.

Synopsis: At the edge of an expansive barren valley, all that remains of The Wallace Farm for Wayward Youth is a few hollowed-out husks of buildings. Seventeen- year-old Kendal (Haley Lu Richardson) can barely recall when the Oregon valley was still lush. It s been a decade since the last rainfall, and society at large has dried up and blown away. Kendal and the few others that remain barely scrape by while dreaming of escape. When a greedy water baron lays claim to what little of the precious resource remains underground, Kendal must decide whether to run and hide or bravely fight for the few cherished people and things she has left. Co-starring Booboo Stewart (The Twilight Saga), Max Charles (The Amazing Spider-Man, Mr. Peabody & Sherman) and genre veteran Barbara Crampton (You re Next, Re-Animator), THE LAST SURVIVORS is a suspenseful look at a futuristic world where only the most resourceful survive.

Wyrmwood: Road of the Dead [Blu-ray]

Synopsis: In the aftermath of a comet breaking up over Earth, most of the planet’s population quickly succumbs to a strange disease which turns them into “zombies. “, Few survive, and those who do, quickly discover all existing fuel sources have been rendered useless by the plague.

Trapped in a wilderness teeming with living dead, one of the survivors, Barry, has lost everything except his sister, Brooke. But even as the disaster unfolds, Brooke is kidnapped and dragged to a terrifying medical lab run by a psychotic “doctor”, who is performing a series of deranged experiments on plague survivors. As Brooke struggles to devise an escape plan, she realizes that the doctor’s experiments have given her strange powers over his zombie captives. Unaware of his sister’s new powers, Barry teams up with fellow survivors to rescue her and protect what family he has left.

With a healthy dose of Mad Max-inspired vehicular mayhem and an enormous serving of pure, raw talent, this raucous post-apocalyptic epic is one of the most original and wildly entertaining genre films in years!

-Audio commentary with the Roache-Turner Brothers

-The Wyrmdiaries: Behind the Scenes of WYRMWOOD featurette

-Storyboards by the Director

Synopsis: It seemed like a great idea when all-around nice guy Max (ANTON YELCHIN, Star Trek) and his beautiful girlfriend, Evelyn (ASHLEY GREENE, Twilight Saga) moved in together. But when Evelyn turns out to be a controlling, manipulative nightmare, Max knows it’s time to call it quits. There’s just one problem: he’s terrified of breaking up with her. Fate steps in when Evelyn is the victim of a fatal, freak accident, leaving Max single and ready to mingle. Just as Max is thinking about moving on with what could be his dream girl, Olivia (Alexandra Daddario, True Detective) – Evelyn has returned from the grave and is determined to get her boyfriend back…even if that means transforming him into one of the undead.

Synopsis: The world s greatest killing machine is three times as deadly when a mutated shark threatens a cruise ship. As the shark eats its way from one end of the ship to the next, the passengers quickly discover that three heads are much more difficult to kill than just one.

The handyman of horror is back with a new box of tricks in Toolbox Murders 2, a terrifying sequel to Tobe Hooper’s 2004 reimagining of the 1978 cult favorite. Picking up directly after the events of Hooper’s shocking film, Toolbox Murders 2 ratchets up the terror as it follows one of Hollywood’s most twisted killers. Resurfacing in the darkest corners of the L.A. underworld with a serious axe to grind, the killer hammers out a plan to put the screws to a new victim: Samantha, the sister of his prey from his previous rampage. Soon Samantha finds herself held captive in a house of horrors and forced to undergo the most unspeakable tortures… with little hope of escape.

Synopsis: On the hunt for an intriguing news story, a small-town news team follows a crew inspecting repossessed houses. Inside a particularly strange house, the news team discovers a box of video tapes inside a locked closet. Sensing a story, they decide to take them back to their studio. From the tapes, they learn that the family who had lived in the house was not pushed out by the banks, but fled the house in fear for their lives. Trying to decode the story, the crew keeps seeing a faceless figure dressed in a dark suit appear in the footage that causes the videotape to scramble. Their fear mounts when this figure, The Operator as he is deemed, starts to appear in their real lives, standing quietly and always watching them. Tortured and terrorized, the three crew members must track down the mystery of The Operator before it’s too late.

Synopsis: The Nightmare From Rodney Ascher, the director of ROOM 237, comes a documentary-horror film exploring the phenomenon of ‘Sleep Paralysis’ through the eyes of eight very different people. These people (and a surprisingly large number of others) often find themselves trapped between the sleeping and waking worlds, totally unable to move but aware of their surroundings while being subject to frequently disturbing sights and sounds. A strange element to these visions is that despite the fact that they know nothing of one another (and had never heard of sleep paralysis before it happened to them), many see similar ghostly ‘shadow men.’ This is one of many reasons many people insist this is more than just a sleep disorder. THE NIGHTMARE digs deep into not only the particulars of these eight people’s uncanny experiences (through elaborate, sometimes surreal dramatizations), but it also explores their search to understand what they’ve gone through and how it’s changed their lives. Blu-ray includes three terrifying deleted scenes and the theatrical trailer.

Synopsis: Kylie Winters, a bullied and self-loathing teen, reluctantly agrees to babysit at an isolated country mansion on Halloween night. When a small boy in a pig mask appears at the door trick-or-treating, Kylie’s night transforms into a horrifying and violent cat-and-mouse game. She must go beyond what she ever thought possible if she and the children are to survive the night.

Synopsis: When the teenaged daughter of a religious family transforms from straight-A student into heroin addict, her parents agree to allow a reality TV show crew to stage an intervention and document her recovery. But what they don’t know is that she has been taking drugs to deal with the unnatural, evil feelings that have been growing inside of her. And when she agrees to rehab, with no drugs to suppress that malevolent force, she and everyone around her will find themselves in mortal danger from an entity far worse than they could have ever imagined. Exploring the blurry lines between addiction, possession and mental illness, director Seth Grossman s INNER DEMONS refreshes the horror genre with a grounded, layered story of a young girl’s battle against demonic possession.

Synopsis: Daisy is the all-American girl next door, with a hunger for true love and an appetite for murder. For years, it’s just been her and her brother living out in the desert, hunting young men for sport – and dinner. While Daisy enjoys these games, she can’t help but yearn for something more. So, when she meets the very handsome John Doe, and they fall madly in love, Daisy can’t believe her good fortune. But it turns out John has some eccentric hobbies of his own, and now Daisy must find out if she will be his partner in crime – or his next victim.

A mammoth Gila monster terrorizes an unsuspecting town by stomping through the streets, crushing buildings and killing at will. When a local’s kid sister is nearly slain by the giant menace, he decides to take matters into his own hands and stop the monster from wreaking any more havoc.

As a hurricane approaches, Captain Thorne Sherman (James Best) docks at an isolated island to drop off supplies to a mad scientist and his beautiful daughter. Dr. Craigis has accidentally created a race of giant shrews that manage to escape during the storm. The only way to survive is to somehow make it off the island…

Dr. Ted Stevens (Kent Taylor) and detective William Grant (Rodney Bell) are sent by the government to investigate a series of puzzling deaths along the coast. With evidence of radiation exposure and the discovery of a staff member on the beach, spear gun in hand, Grant suspects the Pacific College of Oceanography is involved. Has a monstrous beast been irradiated and roused from the depths of the sea?

Voyage to the Prehistoric Planet

When a rocket ship containing a crew is sent to Venus, the mission goes horribly wrong and another team is sent to search for survivors. Once on the mist-enshrouded planet the rescue squad encounters unusual creatures such as dinosaurs—and bizarre beings, including a half-lizard, half-man that impedes their search.

When space explorers discover a strange container on Titan, Saturn’s largest moon, they release a hideous creature that has been asleep for ages—one that has a taste for human flesh. And when a rival corporation’s exploration group arrives to search for the missing men, they will learn all too quickly what has happened.

A wildlife photographer and her brother travel to the dense and mysterious Amazon jungle and find themselves in a fearful adventure when they become a madman’s prey. But if the homicidal hunter doesn’t get them, the Amazon waters are teeming with vicious, flesh-eating piranha that will.

Attack of the Giant Leeches

In a small swampland town, people are mysteriously disappearing. Rumor has it that there is a new breed of swamp leeches that have grown to immense proportions—and when bodies are found drained of blood and covered in giant sucker wounds, the game warden (Ken Clark) gets involved.