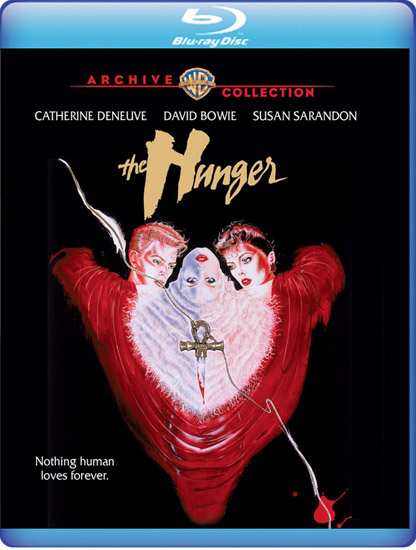 Synopsis: Miriam Blaylock collects Renaissance art, ancient Egyptian pendants, lovers, souls. Alive and fashionably chic in Manhattan, Miriam is an ageless vampire. Although “vampire” is not a word you’ll hear in this movie based on the novel by Whitley Strieber (Wolfen). Instead, debuting feature director Tony Scott fashions a hip, sensual, modern-gothic makeover. Catherine Deneuve radiates macabre elegance as Miriam, blessed with beauty, cursed with bloodlust. David Bowie is fellow fiend and refined husband John. In love, in life, in longing, they are inseparable. But when John abruptly begins to age and turns to a geriatric researcher (Susan Sarandon) for help, Miriam soon eyes the woman as a replacement for John. The Hunger is insatiable.

Synopsis: A French anthropologist moves to Los Angeles and is followed by the evil spirits of an extinct tribe he once uncovered.

-New interviews with actress Lesley-Ann Down and composer Bill Conti

Synopsis: At the height of her career as the dark goddess of Italian horror, the legendary Barbara Steele (BLACK SUNDAY) delivered two of her most memorable performances in this tale of obsession, madness and depravity. Steele stars as a cheating wife who is chained, whipped and tortured to death by her sadistic scientist husband, and as her unstable blonde stepsister whose fate may be even more ghastly. Paul Muller (VAMPYROS LESBOS), Helga Liné (HORROR EXPRESS) and Rik Battaglia (SISTER EMANUELLE) co-star in this twisted shocker directed by Mario Caiano, featuring stunning black & white cinematography by Enzo Barboni and the very first horror score by Ennio Morricone.

Throw away all those inferior transfers from censored TV prints: This is NIGHTMARE CASTLE like you’ve never seen it before!

Terror Creatures From The Grave Feature

Barbara Steele In Conversation Exclusive Featurette With The Queen Of Horror

A Dance Of Ghosts New Featurette For Castle Of Blood

Terror Creatures From The Grave Trailer

Synopsis: PSYCHO BEACH PARTY is a wickedly fun satire of Hollywood movie genres. Chicklet (Lauren Ambrose – CAN’T HARDLY WAIT, HBO’s SIX FEET UNDER), a wannabe surf-girl with a split personality, becomes the primary suspect after a string of humorously gruesome murders terrifies the teen set. When the clues take her to the beach, the fun and suspense begin.

Synopsis: This dark, bloody imaginative fairy tale about a camping trip that turns into deadly carnage draws on such influences as Lord of the Rings, Friday the 13th and The Devil’s Backbone. The story follows 12-year-old outcast Sam who, along with his troop of cub scouts and their teenage supervisors, camp in woods rumored to house a mysterious and deadly werewolf. Inquisitive Sam, certain the woods are inhibited by something evil, soon stumbles upon a feral young boy and, eventually, his evil psychopathic mentor. But convincing the others of the danger falls on deaf ears, and soon ingenious traps begin to take their violent toll on the group. A wildly entertaining killer in the woods actioner. NOTE: Dutch, French, Flemish languages with English subtitles.

Synopsis: CANNIBAL TERROR- Even by the sleaziest standards of 80s EuroTrash, it remains a film that must be seen to be believed: When a pair of criminal knuckleheads and their busty moll kidnap the young daughter of a wealthy tycoon, they foolishly choose to hide in a local jungle infested with ferocious cannibals. What follows is a mind-roasting exercise in atrocious acting, gratuitous nudity and gut-munching mayhem by a ravenous tribe of flesh eaters who inexplicably sport comb-overs and Elvis sideburns. Robert Foster (Inconfessable Orgies Of Emmanuelle), Pamela Stanford (White Cannibal Queen) and Burt Altman (Zombie Lake) star in this infamous Spanish/French co-production that was banned in Britain as one of the original Video Nasties and is now presented uncut, uncensored and mastered in Hi-Def for the first time ever in America!

DEVIL HUNTER- King Of EuroSleaze Jess Franco (Bloody Moon, Macumba Sexual) takes on the 80s Cannibal genre and delivers a jungle sickie like no other! When a safari of sexy babes and violent boneheads ventures into native-crazed wilderness, Uncle Jess unleashes a deluge of relentless nudity, dubious anthropology and his own brand of cut-rate carnage. Ursula Fellner (Sadomania), Al Cliver (Zombie), Robert Foster (Cannibal Terror) and Gisela Hahn (Contamination) co-star in this original Video Nasty also tastefully known as Sexo Cannibal and Mandingo Manhunter with something to offend everyone, now fully restored from the original Spanish negative and presented uncut and uncensored for the first time ever in America!

CANNIBAL TERROR: The Way of all Flesh: An Interview with Alain Deruelle aka Allan W Steeve

DEVIL HUNTER: Spirit of the B Hive: An Interview with Bertrand Altman

Synopsis: Welcome to Nova Springs, a rock and roll metropolis chock-full of rising stars. Here you’ll meet Jessie Cake, a charismatic glam metal front man and his groupie girlfriend, Chloe. After unearthing a mysterious LP in the abandoned estate of legendary 80s superstar David Crystal, these young lovers unleash a bloodthirsty spirit…the infamous Killer of the Woods. Even worse is the flesh-and-blood maniac Naughty Rocky Boy, the skulking back-alley killer whose weapon of choice is a musical instrument! As the bodies pile up in Nova Springs, it’s up to Jessie, Chloe, and rock’n’roll priest Father Zappa (Italian heavy-metal pioneer Pino Scotto) to set things right. It’s LORDS OF SALEM by way of ROCK AND ROLL HIGH SCHOOL, with a side of spaghetti!

Hammer Film Collection – 5 Movie Pack: The Two Faces of Dr. Jekyll, Scream of Fear, The Gorgon, Stop Me Before I Kill, The Curse of the Mummy’s Tomb

The Two Faces of Dr. Jekyll

Absorbed in research directed towards freeing the two natures of man, Dr. Jekyll degenerates in to Mr. Hyde, a vengeful maniac. While Hyde wants revenge against a gambler whom his wife is in love with, Dr. Jekyll, takes steps to do away with his evil self.

A young wheelchair-bound woman returns to her father’s estate to find he’s away on business, but she keeps seeing his dead body in various places. Her stepmother and other house guests employ a plan to drive her insane and take her inheritance.

In a rural village, a series of murders have been committed where each victim was turned into stone. A local professor investigates and finds an evil Gorgon haunting a nearby castle and in search of more victims.

Stop Me Before I Kill!

After a horrific car crash, race car driver Alan Colby goes on vacation to recover, but suffers blackouts and violent outbursts. With his wife by his side, he visits a psychiatrist who promises to cure Alan’s suffering but they have now encountered a mind more unbalanced and disturbed.

The Curse of the Mummy’s Tomb

An American showman and financier disrupts the coffin of a mummified pharoah and finds it empty. The mummy has escaped to fulfill the dreadful prophesy and exact a violent and bloody revenge on all those who defiled his final resting place.

Synopsis: The powers of dark magic rule the night in this chilling masterpiece of supernatural horror as a

college campus turns into a nest of evil. Professor Norman Taylor (The Innocents Peter Wyngarde) has been enjoying unusual success at work lately, but could it be due to the magic his wife Tansy (Janet Blair) practices in secret? A natural skeptic, Norman is infuriated upon discovering her methods, but when he destroys her protective spells, a vindictive force puts both of their lives in mortal danger, leading to a final showdown that ranks as one of the most chilling in horror history. Turn down the lights, curl up tight, and watch this all-time fright classic from legendary Twilight Zone writers Charles Beaumont and Richard Matheson in stunning high definition… if you dare.

Synopsis: A group of actors gather in a remote Northeastern town to rehearse for a mysterious stage production, only to be plunged into a hellish world where their real lives mirror the grisly story of the play.

Synopsis: While on the run from the law, two criminals decide to hide out in a small Florida town. The ringleader, Paul, concocts a plan to pretend to be his child-like accomplice Stanley’s estranged Aunt Martha. Taking over a large old house, Paul and Stanley attempt to lay low, but trouble soon arises when a local girl takes a liking to Stanley and invites him out with her friends. Paul, becoming increasingly paranoid, decides that the only way they can maintain their cover is by murdering everyone who has even the slightest suspicion of what’s really going on, but Stanley isn’t so sure he wants to keep on hiding…

This bizarre, Florida shot regional film made by one-time director Thomas Casey is less a horror movie than a hybrid of crime thriller and vaguely homoerotic relationship drama, with some bloody death scenes and moments of T&A thrown in for good measure. Nearly impossible to see for years, Vinegar Syndrome and AGFA bring this totally unique piece of low-rent trash to DVD, in its proper aspect ratio for the very first time.

All new 2k scan and restoration from an ultra rare 35mm theatrical print.