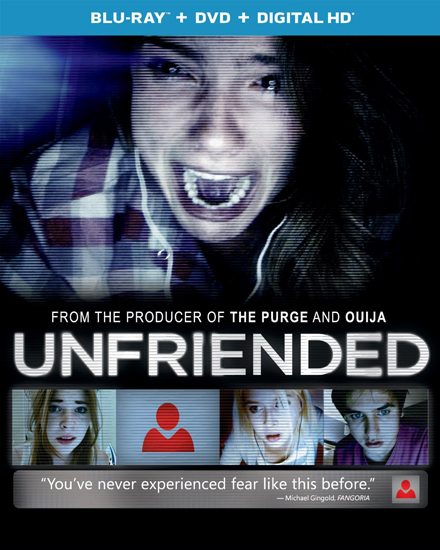 Synopsis: Unfriended unfolds over a teenager’s computer screen as she and her friends are stalked by an unseen figure who seeks vengeance for a shaming video that led a vicious bully to kill herself a year earlier.

The People Under The Stairs [Collector’s Edition] [Blu-ray]

Synopsis: Wes Craven, the director of A Nightmare on Elm Street and Scream, takes you on a terrifying journey inside the most demented house on the street. Trapped inside a fortified home owned by a mysterious couple, a young boy is suddenly thrust into a nightmare. The boy quickly learns the true nature of the house’s homicidal inhabitants and the secret creatures hidden deep within the house.

-House of Horrors – an interview with director of photography Sandi Sissel

-Settling The Score – an interview with composer Don Peake

Synopsis: From the horror masters of Saw comes another taste of raw fear and relentless terror in Dead Silence! Ever since Mary Shaw was hunted down and killed, the small town of Ravens Fair has been haunted by horrific deaths. When a local’s wife is brutally murdered after receiving a mysterious package, the widower Jaime, returns to his hometown to search for his wife’s murderer and unravel the terrifying legend of Mary Shaw. As Jaime digs in his town’s bloody past, he soon discovers why if you see Mary Shaw, you should never, ever scream.

The Monster That Challenged the World [Blu-ray]

Synopsis: Instant Terror… Just Add Water! Creeping dread! Crawling terror! Oozing fear! The local beaches go from fun-filled swim-fest to horrifying slugfest when a horde of gargantuan vampire snails ooze their way into the water supply – and threaten to suck the life out of mankind! Packed with nerve jangling suspense and excitement, this slimy sci-fi thriller delivers superior monster action that’ll pull the most hardened sci-fi cynic right out of his shell! Lieutenant John Twillinger (Tim Holt, The Magnificent Ambersons) thinks he’s seen it all – until an earthquake under the Salton Sea unearths a horrifying nest of prehistoric killer crustaceans. Giant, terrifying and with a hunger for human flesh, the beasts begin feeding on the locals, unleashing a shocking reign of murderous mollusk mayhem. Can the lieutenant do anything to stop their spread? Or will the human race be forever left in the snails’ slimy wake? Directed by cult-filmmaker and TV veteran, Arnold Laven (Sam Whiskey).

Synopsis: After the death of his wife, David Prescott moves to a secluded farmhouse in a Welsh village with teenage daughter Katherine. A stressful, upsetting time is soon made all the worse when they encounter unexplained occurrences and frightening visions in their new home. Desperate for answers, David turns to retired paranormal investigator Hans Voltzwho must rediscover all of his skill and spiritual strength to defeat the spectral menace.

Synopsis: A college student is injured by a malfunctioning soda machine on Highway 6. His fellow students take him to a doctor who lives in a basement bomb shelter and awaits the second coming of Elvis Presley. They can’t leave, and a killer stalks them with an ax.

Synopsis: A terrifying trio of tales guaranteed to leave you shuddering in fear! Four Hours of Deranged Killing Madness!

The Sexual Serial Killer: A strange woman develops a lust and desire for sex that fills her every waking hour. In order to satisfy her insatiable appetite she sells herself as a highly paid lady of the night. She begins having nightmares and seeks the aid of a shrink to help her understand the blood chilling visions of pain, torture and death she is experiencing, but even the doctor is not prepared for the shocking truth to her dreams.

The Video Killer: A man descends into darkness after he sees the most horrifying snuff film ever made. He is scarred for life and plummets into the abyss attracting Vampires, Serial Killers, and deranged members of a body modification cult. As he spirals down closer and closer to the edge of sanity he is haunted by the ghost of the snuff film victim who screams out for revenge from beyond the grave.

The Mutated Executioner: A group of youths travel across state to get away from it all. The only thing on their minds is sex, booze, drugs, and rock and roll. When engine trouble sidelines the party, the group begins a downward spiral when they encounter an abomination of nature and science in the woods. The party comes to a screeching halt as they are picked off one by one by a hatchet wielding freak.

Synopsis: It has been 15 months since the zombie apocalypse. With no new infections for months, the zombies have decayed away; deteriorating to slow, disordered, toothless pests. A group of eight survivors are in the middle of a six-day march across the badlands. A faction splits away from the group and discovers a mysterious serene zombie that lays his hands upon one of the horde, who violently returns to life. Petrified, the resurrected man struggles to escape but is immediately re-devoured; a continual recycling of the horde that keeps them fresh and extraordinarily dangerous. Is this the answer to the zombie plague? A deadly balancing act develops between survival and heroism, in an increasingly splatter-ridden game of cat-and-mouse.

-Shooting The Dead: The Making of Zombie Resurrection

The Changing of Ben Moore

Synopsis: A young man with no recollection of his childhood starts on a journey of self-discovery. While living in his aunt’s house alone, Ben starts developing irregular sleep patterns. His brother Derek, skeptical of Ben’s health and well-being starts filming a video journal to capture Ben sleep walking while having nightmares. Ben has a hard time remembering these night time occurrences while his brother and friends slowly start to realize things are not what they seem with Ben’s sleep psychosis. When Ben’s dog is found dead and his girlfriend goes missing, his quest turns to discovering who is responsible. His deeply concerned friends soon realize they are part of a demonic nightmare.

Synopsis: Bloody Homecoming (2013, NR, 85 MINS) – A group of seniors anxiously prepare for Homecoming night in the sleepy town of Winston. Three years after a tragic accident left a student dead at the annual dance, they find themselves haunted by a deadly visitor from their past. Unable to bury old demons, it looks like it’s finally payback time, and someone’s out for blood. Before the night is over, the halls will run red as they are stalked, staked and butchered by a relentless, savage killer bent on revenge. They must stop whoever is hunting them, or this year’s dance is going to be a killer.

Varsity Blood (2014, NR, 87 MINS)- This football season, Hogeye High’s Warriors and cheerleaders are out for blood. Unfortunately, someone is out for theirs, and they’ll be forced to take one for the team. After the big Halloween football match, the students are joined by an uninvited guest dressed as their high school mascot armed with a bow and arrow, a battle-axe, and an insatiable appetite for butchery. Soon, they find themselves fighting for more than the winning score as terror becomes the name of the game. Featuring “enough inventive kills to keep even the most rabid gorehound happy, a supremely entertaining slasher rollercoaster” (Hysteria Lives!).

Synopsis: Warning, this collection is designed to inspire nightmares of epic proportion. Gather all of your horror-movie-watching friends together for binge-worthy fun with these 30 films because no one will want to be alone when the lights go down. You will have anything but a peaceful snooze.

The Last Man on Earth

I Eat Your Skin

Destined To Be Ingested

How To Be a Serial Killer

Filth to Ashes Flesh to Dust

Evidence of a Haunting

Synopsis: The House That Would Not Die

Ruth and her niece, Sara, move into an old home with a dark past and are faced with strange occurrences of spirits and possession.

The Pit and the Pendulum

Under the direction of Torquemada, the Grand Inquisitor of Spain, a young baker’s wife is falsely accused of witchcraft and dragged before the Inquisition.

Lily and Paul’s lives are overcome by the death of her father. Haunted by his remaining ashes, strange visions and frightening violence wreck paranormal havoc in their once happy home.

Two classic episodes from The Ray Bradbury Theater, one story features a lurking banshee and stars Peter O’Toole, while the other story presents an unwanted eerie child and stars Cyril Cusack.

Katherine travels to Romania to find her father and uncovers their blood-sucking legacy. Starring Anthony Perkins.

Three friends plan a murder of a random victim. They’ve done the leg work, but can they muster up the guts to go through with it?

Marie and her husband plan a relaxing getaway…but something sinister lurks in the light of the full moon.

Nurse Laura Harriman sets out on a psychotic killing spree after her father commits suicide.

The eeriness Sam experienced as a child returns when the sister of his deceased wife drags him into dangerously familiar territory.

A prison full of serial killers succumbs to the punishment of a woman who takes on the presence of their past victims.

A post-graduation celebration becomes a fight for survival when a group of friends accidentally kill a grizzly bear cub and must face the wrath of its furious mother in this creature feature seen on SyFy.

Small town sheriff Grady Barnes (Gary Busey) gets the shock of a lifetime when the bloody body parts he finds in the woods are linked to a vicious, man-eating tiger.

Chupacabra vs. The Alamo

Erik Estrada takes on a deadly pack of blood-thirsty Chupacabras loose in the Texas desert.

A genetically-modified creature—part dire wolf, part human—is on the prowl in a rural community.

After a series of mysterious disappearances, a team of cavers discovers the perpetrator—a grotesque, violent troll with a ginormous appetite.

A lawn-mowing, throat-slitting greenskeeper takes out a group of snobby rich kids at a country club.

The Dead of Night

Grotesque ghouls attack and take over a group of teens, transforming them into the same mindless creatures when night falls.

An alien monster crash-lands at an all-girls school and prowls the tunnels below campus capturing victims for breeding.

It feeds on the dead, waiting beneath the surface…tempting its victims into the dark. Now the two men who have witnessed the creature’s wrath are determined to track it down.

Synopsis: Producer John Carpenter (Halloween, The Thing) presents Halloween III: Season of the Witch, the third chilling installment in the shocking Halloween franchise. When a petrified toy salesman is mysteriously attacked and brought to the hospital, babbling and clutching the year’s most popular Halloween costume, an eerie pumpkin mask, Dr. Daniel Challis is thrust into a terrifying Halloween nightmare. Working with the salesman’s daughter, Ellie, Daniel traces the mask to the Silver Shamrock Novelties company and its founder, Conal Cochran. Ellie and Daniel uncover Cochran’s shocking Halloween plan and must stop him before trick-or-treaters across the country never come home.