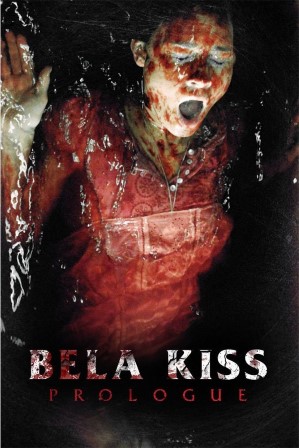 The Ring has a fancy pants new steel-case Blu-ray case coming out this week.  Also, Julia Roberts’s brother as well as Emma Roberts’s father, Eric (yes, you guessed it) Roberts has a movie coming out on DVD with modern-era scream queen, and eventual-legend-in-her-own-time, Danielle Harris by the name of Camp Dread.  …Another short list this week, fellow digital fiends – but stay tuned because next week looks rather promising.  For now: 8 movies and 1 collection.

Bela Kiss was one of the most brutal serial killers who ever lived, having killed 23 young women during the beginning of the First World War. Their blood-drained bodies were found in metal barrels, conserved in alcohol while Bela Kiss was never found. According to rumors, he has been seen decades later, in different parts of the world. Now almost a century later, five bank robbers search for a hideaway in a remote hotel as they flee from the police. Brutal and unforeseen events take place and build a bridge to the past. The assumed safe house turns into a nightmare. Is Bela Kiss still alive?

A man who is down on his luck moves into a self-storage facility where he finds a group strangers who have made the place their home. However, little do they know that a deranged woman has been hunting the facility’s visitors in an attempt to regain the child that was stolen from her. So when the facility gets locked for the night, they find themselves trapped and hunted down, completely at the mercy of the tortured woman’s gruesome attacks.

The “Summer Camp” horror trilogy was one of the most popular franchises of the 1980s. However, the decade ended and so did director Julian Barrett’s career. Now Barrett plans to resurrect his gory series via a modern reboot patterned after reality filmmaking. With his former leading lady and an eclectic group of 10 young “contestants,” Barrett returns to the same locale where his old splatter-fests were filmed. When one of the campers is found savagely murdered, they realize there’s more at stake than just fame and fortune. Each of them is in a fight for their lives as they realize summer is over – forever.

Auriel, a marine biologist assigned to investigate the mysterious deaths of marine life in an inland salt water lake, encounters a giant, ravenous creature previously believed to have been the stuff of legend. With the local residents terrified of the monster that dwells near them, Auriel is the only one who can stop the creature – that is, if she can survive it herself.

With Kennedy Jamieson (Julia Benson That Burning Feeling, SGU Stargate Universe) and Ryan Harris (Peter Benson Arrow, The Killing) wedding quickly approaching, they are swept away by Chet, their best man, to a remote cabin for an unforgettable combined bachelor/bachelorette weekend with their friends that they will never forget. But the get together takes a horrifying turn when dark secrets and forbidden desires are revealed and a mysterious killer starts brutally picking them off one-by-one. What started out as a celebration quickly descends into a bloody nightmare with friendships ripped apart and accusations flying in this blood-filled psychological horror.

Ryan is making a documentary on his friend, Brett, about camping for the first time. However, once they begin camping, they discover that there is a mysterious figure that is hunting them.

The Ring is the critically acclaimed, smash hit thriller. This cinematic thrill ride will keep you on the edge of your seat from the stunning opening to the astonishing conclusion! It begins as just another urban legend – the whispered tale of a nightmarish videotape that causes anyone who watches it to die seven days later. But when four teenagers all meet with mysterious deaths exactly one week after watching just such a tape, investigative reporter Rachel Keller (Naomi Watts) tracks down the video and watches it. Now, the legend is coming true, the clock is ticking and Rachel has just s even days to unravel the mystery of The Ring.

Based on actual events. Samantha is a middle-aged woman who plays the role of a Fortune Teller at a local amusement park. But for her, she is a thorough skeptic about paranormal activities and all things supernatural. And she certainly doesn’t believe in ghosts. Having recently suffered a tragic loss she is at a crossroads in her personal and work world as she questions what her future now holds. But one night alone in her house, she is about to learn that there are dark forces that don’t care whether she believes or not, or what her situation she is in. This is REAL…Or is it? And why has this suddenly happening to her? She didn’t intentionally bring IT into her house. She doesn’t understand what it wants. Or even what it IS… Yet she is truly afraid of what may be lurking in the dark. With every door she opens, her terror grows… Don t be afraid of the dark…Be afraid of what is in the dark…

The Vampire Lovers (1970) – A female vampire ravages the young girls and townsfolk of a peaceful hamlet in eighteenth century Europe who, years earlier, killed off her fellow vampires. A rousing hunt for the vampiress ensues as a group of men follow her bloody trail of terror through the countryside. Starring Ingrid Pitt, George Cole and Peter Cushing.
The Bat People (1974) – The bite of a bat causes an idealistic doctor to begin a horrifying transformation into a half man, half bat creature-and no one is safe from his rampage.
The Screaming Skull (1958) – A recently married woman begins to believe that she s losing her mind in this spooky thriller.
The Vampire (1957) – Another unfortunate doctor has a bad run in with bats in this sci-fi flavored horror. After mistakenly ingesting some pills made from bat s blood, the good doctor finds himself turning into a terrifying creature of the night.