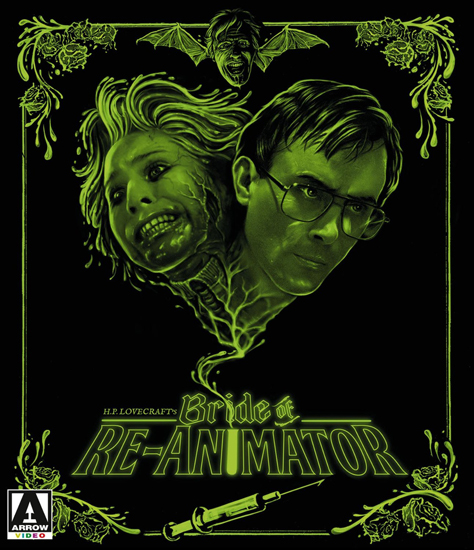 The success of Stuart Gordon s hit horror-comedy Re-animator meant that a sequel was all but inevitable. The resulting follow-up, Bride of Re-animator – this time helmed by director Brian Yuzna (Society, Return of the Living Dead 3 and Producer of the original Re-animator) – would prove that there was a good deal more life left in the story of Dr. Herbert West and his ghoulish exploits.

It is 8 years since the Miskatonic massacre. Unperturbed by the disastrous outcome of his previous meddling with the dead, Dr. West (again played by Jeffrey Combs) continues his research into the phenomenon of re-animation; only this time, he plans to create life starting with the heart of his young protégé Dan s dearly deceased, Meg Halsey. Surely nothing could go wrong?

With special effects master Screaming Mad George (the man behind the infamous shunting sequence in Society) on hand to contribute a host of characteristically weird and wonderful creations including zombified bats and a one-eyed finger spider Bride of re-animator is a more than worthy successor to Gordon s original cult classic.

Brand new 2K restorations of the Unrated and R-rated versions of the film, approved by director Brian Yuzna

Optional English subtitles for the deaf and hard of hearing

Limited Edition Packaging to be revealed

Getting Ahead in Horror – archive making-of featurette

Synopsis: A young woman’s hunt for her missing sister leads to horror and madness in this terrifying supernatural thriller starring Natalie Dormer (Game of Thrones and The Hunger Games franchise). When her troubled twin sister mysteriously disappears, Sara Price (Dormer) discovers she vanished in Japan’s infamous Suicide Forest. Searching its eerie dark woods, Sara plunges into a tormented world where angry spirits lie in wait for those who ignore the warning: never stray from the path.

Digital Copy of The Forest (Subject to expiration. Go to NBCUCodes.com for details.)

-“Horror’s Hallowed Grounds:” Revisiting the locations of the film

Synopsis: A plane takes off from Los Angeles and heads for Tokyo, but soon its passengers feel a mysterious force onboard.

Synopsis: For 19-year-old Jay, fall should be about school, boys and weekends out at the lake. But after a seemingly innocent sexual encounter, she finds herself plagued by strange visions and the inescapable sense that someone, or something, is following her. Jay and her teenage friends must now find a way to escape the horrors that seem to be only a few steps behind in this critically-acclaimed chiller that Bloody Disgusting calls the scariest movie of 2015.

When Ivan Moser (football great Lyle Alzado), a convicted serial killer, is set to be electrocuted, a devastating prison riot erupts on the day of the execution. In the wake of the destruction and mayhem, the prison is shut down and Moser becomes a legend. No proof of his death exists.

Eighteen months later, a film director (Anthony Perkins) intrigued by the legend of Moser, decides to use the prison as a film set. One the last night of filming, the truth of Moser’s fate is about to be revealed. The film crew, trapped inside the prison, begin to disappear one by one. This electrifying thriller also stars Deborah Foreman (Valley Girl) and Clayton Rohner (I, Madman).

Anthony Perkins (Psycho) stars as an outwardly rational Dr. Jekyll who rapidly descends into a world of sexual obsession and murder as Mr. Hyde… and who may also be Jack the Ripper! A shocking new twist on one of the most infamous crime stories of all time, this terrifying thriller will keep you on the cutting edge of fear!

After a lab experiment unleashes mysterious fumes, Dr. Henry Jekyll undergoes a horrifying transformation into a savage alter ego who calls himself Jack Hyde. Meanwhile, the depraved killer Jack the Ripper is slicing his way through the alleys of Whitechapel, leaving mutilated streetwalkers in his wake. Is there a connection between Jekyll/Hyde and Jack the Ripper? And can anyone stop his reign of terror?

Synopsis: The story of a deranged serial killer from the director of Nekromantik. Lothar Schramm (Florian Koemer von Gustorf) is dying, face down in a pool of his own blood. Behind his closed eyes, fractured memories repeat themselves. He runs by the sea. He lusts after the whore (Nekromantik 2’s Monika M.) across the hall. He staggers through life uncertainly. He kills. Schramm is the story of the notorious Lipstick Killer Lothar Schramm’s last days on earth. Revealed in a series of tightly constructed flashbacks, the film offers an unflinching look into the mind of a serial killer. Uncompromising in its depictions of violence and perversion, Schramm is a poetic masterpiece of horror guaranteed to make you squirm.

The Making of Schramm

Diary Of A Deadbeat: The Story Of Jim VanBebber (Combo) [Blu-ray]

Synopsis: Jim VanBebber, an uncompromising, underground, outlaw filmmaker from Greenville, Ohio has become one of the most infamous and controversial American independent filmmakers of our time. VanBebber brought us such cult classics as Deadbeat At Dawn (the first feature film made in Dayton, Ohio) My Sweet Satan, The Manson Family, and many others. Shot over the course of several years, Diary Of A Deadbeat is a documentary that follows VanBebber’s life from his early super 8mm films to his days in Hollywood. Directed by young auteur Victor Bonacore, the documentary features interviews with an eclectic group of artists including Pantera’s Phil Ansemlo, transgressive film director Richard Kern, Skinny Puppy’s Nivek Ogre, R.A. The Rugged Man, Heidi Honeycutt, Stephen Biro, Damon Packard, Jessie Seitz, and many more.

OVER TWO HOURS OF SPECIAL FEATURES!

At Home With Mike Capone

Interview With Director (Blu-ray only)

Interview With Producers (Blu-ray only)

Synopsis: In this surreal retelling of the ancient myth of the Medusa, bizarre, clothed statues of men are appearing all over Greece. Only Perseus, the leader of a gang of modern Athenian thieves, holds the answer to the mystery. It has something to do with a beautiful, long-haired woman in black who is connected with his troubled childhood. One night his gang breaks into a deserted house in the countryside looking for goods to steal. What they find is entirely unexpected and leads Perseus on a dangerous journey into his past.

Medousa is one of the very few attempts to make a modern Greek horror film. Its intriguing plot unfolds in a surprising and yet entirely logical way, creating a memorably atmospheric thriller that reworks familiar myths into an original and highly personal narrative.

Mondo Macabro is very proud to be presenting for the first time on US video this overlooked gem of genre cinema. The film was screened at a number of international festivals and won a prize at World-Fest Houston in 1998. It’s a film ripe for rediscovery and this long overdue release announces the re-emergence of a unique film making talent.

Where the Devil Dwells

Synopsis: The year is 1989 and satanic paranoia runs rampant in America. Just out of the Sunnyvale Psychiatric Hospital, Lenard Vasquez, son of allegedly-slain serial killer Oren Butcher Vasquez, is remanded under house arrest with intensive supervision by Don Miller, a sadistic sheriff who abides by his own set of rules. Soon after moving in, Lenard is tormented by ominous signs that may be the design of a dangerous cult. Lenard s mental illness may never allow him to find out for sure. He enlists the help of a local student, Mitzi, to help him for the duration of his sentence. But when Lenard s father threatens to come back into his life and resume killing, he has to grapple with the question of what is real and how he will survive.

Synopsis: Wounded by a recent divorce and haunted by a tragic event in his childhood, Eddie returns to his home town hoping to pick up the pieces of his broken life. There he meets Amy, a mysterious and beautiful young woman with an undeniable allure. Eddie falls for Amy, easing his personal pain with her love-and lust. Something dark and sinister lurks in Amy’s past- Amy is a conduit, a channel for an evil that she most spread to others through attraction. Will her love save Eddie, or will it take him to darker places?

Synopsis: Mark Hannum is an aspiring author tired of the routine and monotony of his life. When he decides to finally write his opus on the Paranormal, he gives up his day job to pursue his dream but his life begins a downward spiral. He becomes possessed with the supernatural and is constantly immersed in his research, alienating his girlfriend who then leaves him. Soon all he has left is the case of Mrs. Ester s ghost. The old lady’s house is a strange paranormal trap that eventually consumes him day and night. He travels to the darkest places imaginable and realizes too late that he’s in over his head. This is one ghost that doesn’t want to be disturbed. Starring Christopher Darby (A Dark Place Inside) and Carol Florence (12 Monkeys, Ocean’s 11).

In the psychological thriller Doctor Mabuse, the criminal mastermind plots a new reign of terror, with only Inspector Lohmann standing in the way. Infiltrating the demon’s inner circle, Lohmann learns that the cost for defying Mabuse is a fate far worse than death.

The steampunk shocker Doctor Mabuse: Etiopomar uses six interwoven tales to tell the story of the villain’s quest to establish a kingdom for his followers. To create what he calls his ‘Etiopomar,’ Mabuse enlists an army of automatons created by a mad scientist…who will be very familiar to fans of classic German cinema.

Synopsis: Unable to cope with life changes, a sex addicted thug turns himself into a woman.