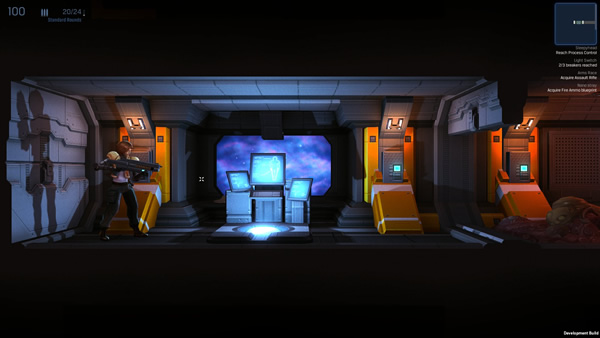 We received some new information on the horror game Dark Matter as it prepares for a dual campaign. Here are the details.

InterWave Studios announced today a dual Kickstarter and Steam Greenlight campaign that will run simultaneously for their upcoming DRM-free game Dark Matter. Dark Matter is a Metroid-like, intense sci-fi side scrolling game that combines the twitch mechanics of a first person shooter with an adventure platformer.

“We could release Dark Matter right now in its beta form, but there is a level of polish and some necessary tweaking to gameplay mechanics required in order to ensure the game provides people with an exceptional, fun and intense experience. The funding will provide us with the additional two months we need to complete Dark Matter. At the same time, we are looking to publish Dark Matter via Steam Greenlight’s system that uses their community to pick upcoming new games,” said Igor Raffaele, general manager of InterWave Studios.

InterWave Studios will attempt to crowdsource and publish Dark Matter simultaneously over the course of the next 30 days. The funding will go directly to the game’s final two months of development to ensure that Dark Matter achieves the level of polish it deserves. In addition, InterWave will begin to reach out to its community with unique access to the game and the developers to help achieve the level of support it requires in the Greenlight community in order for Steam to publish the game.

“As part of the Kickstarter campaign, we are going to do something truly unprecedented by granting our higher level backers access to Dark Matter's beta version during the campaign so that they can help dictate the game's development by providing feedback to us directly via our forums and one-on-one meetings. With our backers’ feedback and support, our goal is to create the type of game we want to play rather than the type of game big studios would force on players. Big publishers would normally ignore smaller games with lower profit margins like Dark Matter, but we are an independent studio, so we don’t have to sell millions of games in order to be successful. We don’t have to appease shareholders. We only have to make our fans happy. It is this philosophy that allows us to create games like Dark Matter and we look forward to sharing it with everyone,” said Raffaele.

ABOUT THE GAME
Dark Matter is about light and shadow. Dark Matter’s intense storyline set in a sci-fi/horror/adventure world set on the deep space exploration vessel, the Endeavor. One year into its mission, the Endeavor sent a static filled communication about strange lights and angels and then was never heard from again. You play as Ensign, a female crew member who emerges from cryosleep almost 70 years after the final transmission. The crew has vanished and the Endeavor now drifts in space dying and infested with unknown, deadly parasites. You must survive long enough to get the ship running before it dies, find out what happened to the crew and the mission and make it safely home.

Dark Matter is at its core a modern descendant of Metroid. Dark Matter is driven by similarly progressive unlockable level mechanics, but with a creepy and dark atmosphere where light and darkness play a vital role in the player’s survival. It is a side scrolling throwback to Metroid-like platformers without the jumping puzzles where the best action requires careful planning and quick execution. Dark Matter is a single player, 2.5D adventure platformer game. Unlike other side scrolling platformers, Dark Matter requires the type of twitch aim and quick reflexes that first-person shooter fans enjoy. Dark Matter will be available for PC, MAC and Linux at launch and will be fully localizable. It will launch in English, Dutch, German and Italian day one.