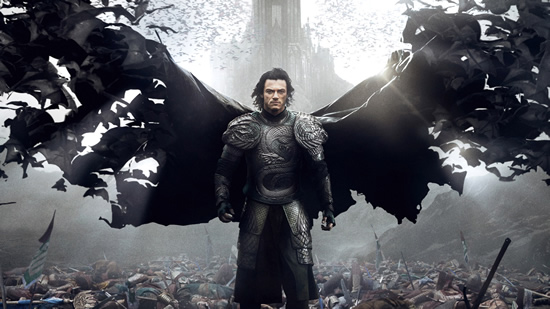 Our Thoughts: **SPOILERS** Inspired by the combination of Bram Stoker’s Dracula and the popular Vlad The Impaler origin theory, Dracula Untold is the story of how Vlad became Dracula in an original new story that brings back old school vampire lore.

Dracula Untold begins with a brief history of Vlad the Impaler before his escape from the Turks to Transylvania and crowning as Prince, as told by Vlad’s son. Then the film then cuts to Vlad and his team realizing that they had entered Turkish territory. As they search a nearby cave in the mountains, they run into an ancient vampire who kills two of two of Vlad’s men. Vlad and the remainder of his men make it home safe to Castle Dracula and his beloved wife Mirena and young son Ingeras.

When a small party of soldiers arrive to retrieve Vlad’s son, Vlad kills them all in an impressive and brutal display of skill that he is well known for. Knowing that there is now a massive force of Turks coming his way, Vlad realizes he does not have anywhere near enough men to go up against an army of Turks.  Desperate, Vlad decides to seek out the vampire in the mountains to help save his village in any way he can. After Vlad takes his chances and drinks the blood the vampire advises him to, his mortal body dies and he wakes as a vampire sometime later. He has now gained amazing powers of speed and strength, unmatched by any mortal man. The story continues with amazing visuals and a very refreshing approach to the timeless story.

I found Dracula Untold to be a very enjoyable and fresh approach to the Dracula story. To be honest, it was better than I expected it to be and left me feeling like I had just seen a classic Dracula film. It was a return to a lot of classical elements of vampire legend we haven’t seen lately in film. First time director Gary Shore does an amazing job telling the age old tale, creatively marrying the two oldest inspirations for Dracula into one dark and beautiful film. Mixing fantasy, gothic action and horror elements seamlessly, Dracula Untold is the best vampire film in recent years. Luke Evans is incredible as the tragic Dracula, Charles Dance is super creepy in his portrayal of the elder vampire, and Sarah Gadon is excellent as Vlad’s devoted wife Mirena. Dracula fans will certainly not be disappointed.