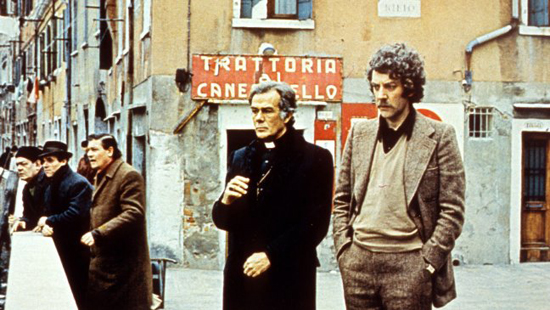 The classic horror film ‘Don’t Look Now’ from the 1970s is getting a remake.  StudioCanal is producing along with The Picture Company’s Andrew Rona and Alex Heineman.  The original 1973 film was directed by Nicholas Roeg and starred Donald Sutherland and Julie Christie, who played a grieving couple who lost their daughter.  When the couple travel to Venice, they meet a clairvoyant Catholic nun who is in contact with their dead daughter, and warns them that their lives are in danger.  The original film is known for it’s stylish editing and graphic sex scene, which is still under debate today as to whether actual intercourse was filmed.  Many studious are interested in the project, which is expected to pick up a writer after a studio is attached, which was the case with their remake of ‘Escape from New York’.  The producers are hopeful of a fall start.