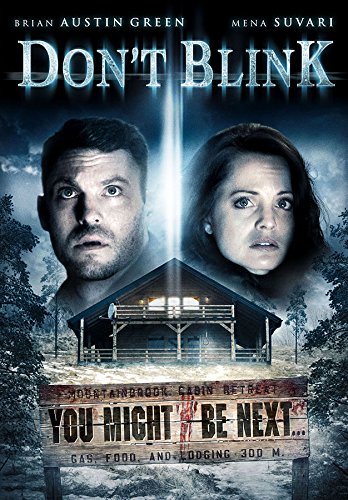 Synopsis: Ten people arrive at a secluded mountain resort to find it completely deserted. With no gas for the return trip, the visitors are forced to stay and investigate the mystery surrounding the abandoned lodge.

Our Thoughts: Don’t Blink is an incredibly suspenseful horror film, driven by characters pushed to their breaking points.  It is a thought provoking, original story that will leave you thinking about it long after it’s ended. It blends mystery, sci-fi and horror seamlessly, leaving you on the edge of your seat.

The film is extremely effective in pulling you in from the first few minutes. The story centers around the investigation of a resort where previous occupants seemed to have dropped everything and disappeared. The special attention paid to small details builds a huge amount of mystery and intrigue. Just when you think you have an idea of where it might be leading, it takes another unexpected turn. I found the absence of bugs, birds and animals, along with the mysteriously frozen pond extremely fascinating.

Members of the the group start disappearing, further deepening the mystery. Being out of each other’s sight for even thirty seconds becomes a risk. The group is split on what to do and as more disappear, the remaining experience mental breakdowns and turn on each other. The ending is one that viewers will either love or hate. Personally I like the way it ended and I am glad they didn’t go another way with it.

Don’t Blink is reminiscent of a twilight zone episode at times, and a Stephen King story in others, which I wouldn’t doubt is intentional since both of them are mentioned by name though the course of the film. All of the acting is excellent. Zack Ward gives a particularly outstanding performance as Alex. Brian Austin Green who plays Jack is at the top of his game. Joanne Kelly who plays Claire is also excellent. Mena Suvari is also good, but her role is much smaller than expected. If you love suspenseful horror, you won’t want to miss Don’t Blink!