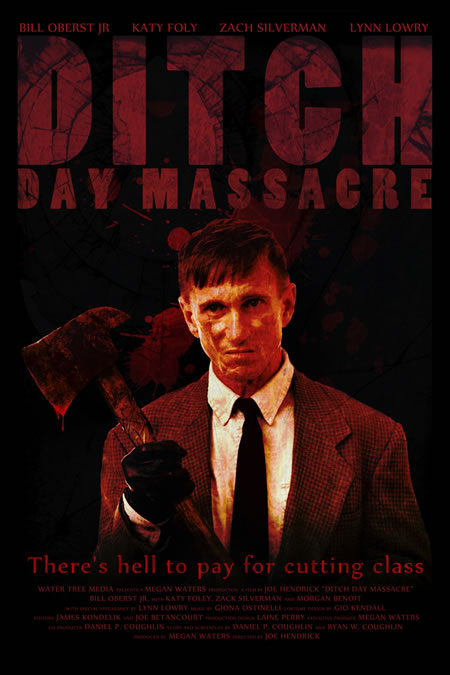 Water Tree Media has completed production on the slasher film Ditch Day Massacre, recently. This horrifying film stars Bill Oberst Jr., Katy Foley and Zack Silverman, in a ditch party gone violently wrong. Megan Waters is the producer of this exciting feature. Also, Ditch Day Massacre is a throwback to the tense style of filmmaking from the ‘80s; the killer’s motivations are kept in mystery, until the bloody end. Now, horror fans can preview this feature and channel its course by picking their favourite poster, from the three just released.

The three posters each have their distinctive style. The first graphic shows actor Bill Oberst Jr. as Vick, poised with a nasty looking wood axe. It is simple and scary. The second poster gives us a glimpse of the house where several teens are throwing a high school ditch party. Above the house, the maniac looms above, like a demented reaper. Finally, the third poster features the terrorized teen Jenny, played by Katy Foley. The character Mike (Zack Silverman) can also be seen. Which poster do you like best?

Writer Daniel Coughlin knows the importance of conceptualizing and designing a proper look for a film. Coughling states of these posters and others: “there are those posters that you never forget…like the original Maniac – the artwork draws you in, grabs you and forces you to watch the movie.” Graphic artist Jake Deardorff has designed each poster. And now, it is time for fans to pick their favourite.

A contest for picking the best poster will be held at the the Ditch Day Massacre fan page, which can be found here:

The winning graphic will be showcased at several upcoming film festivals. Producer Waters says of the upcoming festival run: “it’s going to be a fun-filled, gory, thrill ride from the opening image to the end credits.” The film’s World Premiere will be announced shortly.

For more info on the film, please visit the Ditch Day Massacre homepage:

The trailer for the film is here: