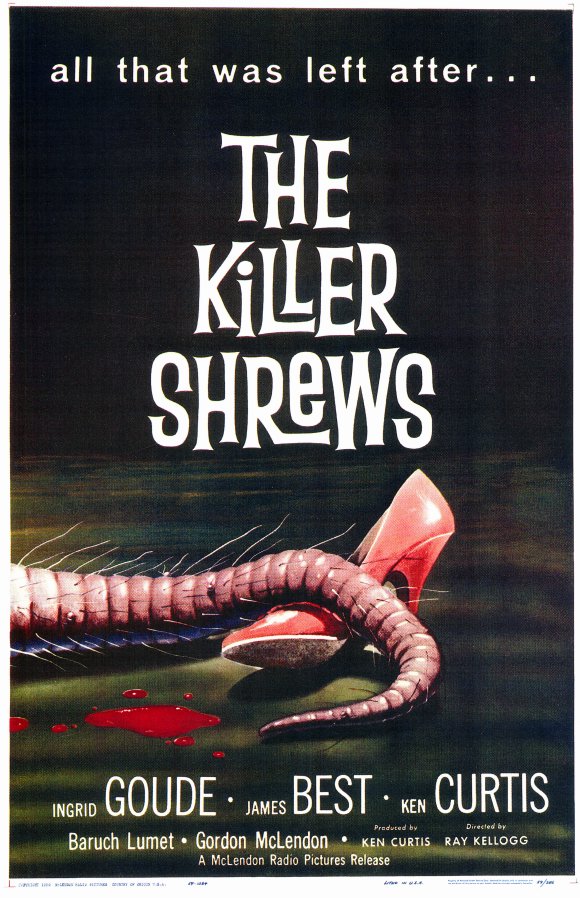 On an isolated island in the midst of a hurricane, a small group of people are terrorized by voracious, mutant creatures in The Killer Shrews, digitally restored and available on DVD Nov. 11 from Film Chest Media Group.

Captain Thorne Sherman (James Best, The Dukes of Hazzard, Sounder, Shock Corridor) and his first mate deliver supplies by boat to a remote island. There, scientist Dr. Marlowe Craigis (Baruch Lumet, The Pawnbroker) – accompanied by his daughter (Miss Sweden 1956 Ingrid Goude, Never Steal Anything Small, Steve Canyon) and his assistants – is doing research in an effort to reduce world hunger. When the group welcomes their visitors but, despite an approaching hurricane, subtly resists them staying overnight, it becomes apparent something is terribly wrong. An ill-fated experiment has resulted in the creation of giant, voracious, poisonous shrews that are now loose on the island, where they are Barricaded in the research compound, they become surrounded by the mutant beasts, which are hungry and quickly running out of food. In predictable, B-movie fashion, the shrews attack the ship’s crew, then turn their sights on the rest of the group, resulting in mayhem, death and destruction.

Released in 1959, this low-budget flick found its niche with cult horror fans and is a favorite of Stephen Also starring Ken Curtis (Robin Hood, The Searchers, Gunsmoke), The Killer Shrews is presented in full screen with an aspect ratio of 4 x 3 and original sound.