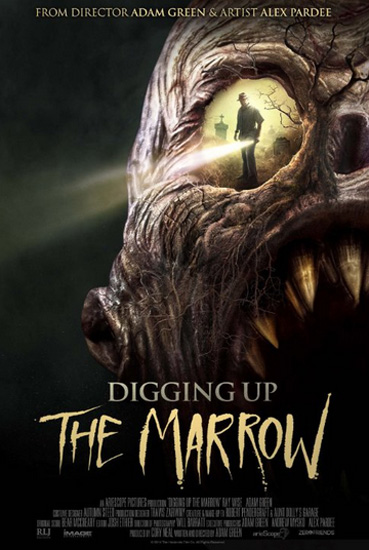 Digging Up The Marrow – Review

Digging Up The Marrow – Review

Synopsis: A documentary exploring genre based monster art takes an odd turn when the filmmakers are contacted by a man who claims he can prove that monsters are indeed real.

Our Thoughts: ‘Digging Up The Marrow’ is one of the most original films I’ve seen as of late. It’s a great new addition to the monster horror genre that blurs the lines between fantasy and reality seamlessly in an entertaining thriller that you won’t soon forget.

The film begins like your run of the mill documentary centering around the art of monster horror, which in an of itself is entertaining to see for any horror fan, when director Adam Green, who plays himself, is contacted by a man who claims that monsters are real. Ray Wise plays the seemingly crazy William Dekker, and is the only one interviewed that isn’t playing himself in the film. Dekker leads them to the entrance of where the monsters live, which he calls ‘marrow’, to try and catch some of the creatures on film.

When they do see glimpses of so called monsters, no one can be sure if they are indeed real or not. Green, who says he has wished for monsters to be real for his entire life, is the only one who really believes, while the others are skeptical. The monsters themselves, who are deformed humans that leave civilized society in their youth and live outside of our world, were my favorite part of the film. Based on the art of Alex Pardee, the monsters were creative, creepy and sometimes terrifying. Much like other popular monster films, I was left wanting to see more of them after it was over.

Wise gives an incredible performance as the desperate William Dekker. Adam Green delivers an entertaining performance as himself. Along with an all around great film, we get some big name horror cameos including: Mick Garris, Tony Todd, Kane Hodder, and Lloyd Kaufman. Co-stars Rileah Vanderbilt, Will Barratt, and Josh Ethier all give great performances. Adam Green and horror fans alike won’t want to miss ‘Digging Up The Marrow’!