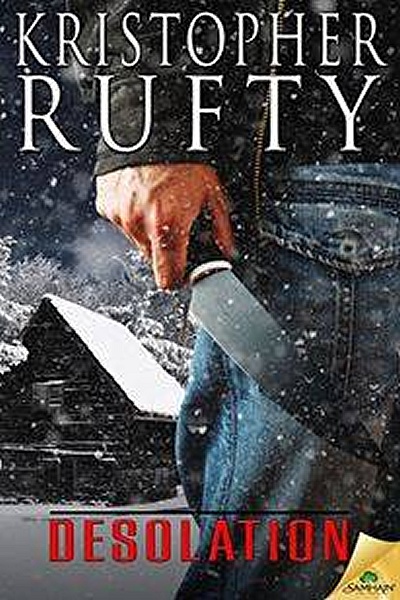 “Desolation”- Blood and Pain in the Endless Snow

“Desolation”- Blood and Pain in the Endless Snow

“Desolation was an idea I had since 2006. Actually, I woke up from a dream and in the dream I was watching a movie and it was Desolation. It seemed so real.”

Often times life imitates art. We struggle, we celebrate, we deal with wrong doings and we battle what is inside of us. Most people have a darkness in them that we never see, a darkness and a sense of loss that is kept at bay through therapy, family, vice and more. Each of us are different in how we deal with personal pain and events that shape our life. For author Kristopher Rufty, his latest “Samhain Publishing” novel “Desolation” goes deep. “When I started out with “Desolation”, it did not set out to be my most personal book but it did become that. Each character in Desolation has a little bit of me in each one.”

Rufty is one of the pillars of a new generation of horror writers that finds personal connection in all of his works. Whether it is novels on serial killers, monsters, revenge, rituals, aliens or reality, Rufty finds the dark markers of his life outside of writing and injects them into his work. “In 2012 I lost my father to a tragic auto accident,” Rufty said on “The Horror Happens Radio Show”. “My own personal coping mechanisms played a part in it. I was told to write letters to him like what Dennis is doing, writing letters to his wife. However, instead of Dennis, it was me with my father. The therapist said slowly you will miss a day and then another day until you don’t need it anymore. For me, that made it worse and I approached the book with all this in mind.”

The story of “Desolation” surrounds two men, Dennis and Grant who both begin their storylines with lies. Grant is driving home drunk one night and has a fatal accident with Dennis’s car. In the process killing Dennis’s family including his wife and two kids. Each of the two families in “Desolation” mirror each other many ways but Rufty saw this opening scene and the other parts of the story of a powerful way to ignite the events. Also Rufty said that he saw these vivid events in his dream one night. With the mix of the dream and the events of his father’s passing it shaped the powerful prologue. “After I wrote the prologue, I never read it again. It tore me apart. When I got back the notes from my publisher Don D’Auria, he wrote how it was the most intense thing he had ever read.”

That prologue and opening chapters sets the stage for a tale of revenge and redemption that questions the reader’s perception as well as the idea of right and wrong. Certainly a strength of this novel, Rufty through his writing and characters construction asks the reader to look deep and understand what each of the characters is going through no matter the motives. Rufty talked about it, “I wanted the perception of the reader to wonder why Dennis is right and for the reader to understand him. Grant however is different. He is not going to let anyone see how bad it is for him.” Each main character takes the journey of redemption and/or revenge differently. For Grant, he is dealt with very softly in the court system, getting off easy because of his status and connections from his profession (which is twisted irony considering a lawyer like himself has no defense). His life is in shambles but yet he still finds himself lying in every stage of his marriage, career and life. “Grant’s family knows how bad he messed up. He may be able to hide it from everyone else but not from them,” said Rufty.

This shows through as the unlikable character of Grant attempts to work things back to the way they were with a family Christmas trip up to their cabin in the deep woods. During that time, he plans to mend fences and get control over the situation with his two kids Bobby and Kara as well as his wife Marion. Rufty talked about the family structure and the issues that came with it. “I was Bobby. I was that punk rock kid who played in a band and painted my finger nails. My dad was quiet, not like Grant but that was me,” Rufty laughed. “I wanted the daughter (Kara) to see the good in her dad, a younger version of the mother who was trying. For Marion (mom), she knows it will never be the same again no matter what happens. She can’t be a cookie cutter wife. She is devastated cause grant has lied to her so many times. She even maybe is embarrassed.” Even with that though, Rufty weaves in some rekindled caring and romance that helps them to cope, not just leaving their relationship in shambles.

With those factors in place we see through a majority of the book that the dysfunction of the traditional family with lies, the aspect of Grant’s kids being old enough to move away and empty nest syndrome along with friction from all the pain from the accident and trial. “Originally, the kids were going to be younger but that would be too typical. There needed to be a point where they don’t need him anymore. That made more sense to the story and Grant.” Rufty continued to talk about the relationship between Bobby and Grant as it leads to the final chapters of “Desolation”, “Each time it reminds him (Bobby) of when he comes home to visit from college and it refuels his anger towards Grant. He’s at the age where he thinks he is a man and better man than him.” This snowballs as they are trapped and have to survive at the cabin. What is truly smart on Rufty’s part is the desperation between everyone and how allegiances shift as the truth comes out and reality sets in between not only Bobby and Grant but Kara and Grant.

For me, Dennis is a much more of a sympathetic character here. Dennis has lost everything, he is hollow and deconstructed in the process of coping and grieving. He is an empty and understandable character. Rufty talked about that, “Dennis is surviving and changing because Grant is moving on with his life. That is what eats at him. That’s when he becomes absorbed and it is almost like he becomes a different person with his intent on making Grant suffer like he has. He can’t let go of Grant and he stalks him throughout the story,” said Rufty addressing the main focus and storyline in “Desolation. When you look at it, they are two sides of the same coin.

This story line moves through different stages that never slows too much but give you the necessary puzzle pieces to Dennis’ ultimate endgame. “He (Dennis) can’t let go of the hope that he will never get a reply back from his dead wife. It becomes, why is he there? He does not know except that. It is what affects his mentality and thought process. It perverts it. It is almost impossible to find redemption with him.” Showing different sides of Dennis shattered mind, we read his letters to his dead wife and family as well as witness the therapy sessions with his counselor Sonja to help Dennis move on. These failed methods, pain and twisted logic leads to Dennis justifying the internal pain, break ins, stalking, torture, assault and the final showdown deep in the snowy woods with Grant and his family that turns deadly. That is the brilliance of what Rufty does in constructing these leads and the collision course they head towards. But enough about that, don’t want to give away the gory and tense details… read it!

Originally optioned as an exploitation style feature film (think “Last House on the Left”) with at one point the departed David Hess was to play Grant and actor Reggie Bannister to be a part of an impressive ensemble, the film never saw the light of day. However, Rufty thought different after years in development and time to think on all that had happened. “How cinematic it looked in my head. How wrong however I was in the approach. I was approaching it from all of Dennis’s point of view for the film but I should also look at it from Grant’s point of view also. Which I did when I got it back.” That changed the stories focus and elements of horror. Why the book has a cinematic feel to it and a visual presence in the actions, emotions and choices of each character, you sit back with Rufty’s personal influence, structure of his writing and raw emotion that infects everyone. Whether the rebellious anger (Bobby), acceptance (Kara), patience (Marion), redemption (Grant), revenge (Dennis), pain (Dennis’s family) or hope with Sonja you are run the gauntlet. One of the biggest examples and channelings of this, is where the genesis came from for “Desolation”, Dennis’s letters. “In those letters, I wanted to see Dennis collapsing. Turning from nervous to madness,” Rufty said. “I wanted a big part of Dennis to know he will never get a reply. This was a tool I did not want Dennis to go into it half heartily with the influences I have had over the years. I guess the increased his level of vengeance and the brutality of it all.” For me, these letters are crucial chapters through a majority of the book as you see him turn from false hope to pure anger and insanity.

As we reach the final third of the book, we see Dennis’s plan come to full term. These final chapters take the book from dark drama and story of two men looking to redemption to straight up hostage, horror story. The imagery of the location, heavy snow and vast woods. The care taker and Bobby’s girlfriend getting involved as well as the siege on Grant’s family including torturing them is intense and graphic at times. Rufty talked about influences involved in the writing of Dennis’s mindset and plan. “Again, it was very visual to me. I could see the scenes shot by shot. Watching different horror movies had a huge impact on it. As I was writing it, I could hear the band Goblin playing.” Rufty mentioned films like Lucio Fulci’s “New York Ripper” and Dario Argento classics like “Deep Red” and “Opera” influencing the torture scenes, mood and pace. IN “Desolation”, we see homage in scenes with razor blades on the eyes, the description of hands and movements along with the overall tone reflecting classic Giallo storytelling.

As reader, at some points your pulse goes up (Dennis scouting the cabin and his presence), you cringe (Dennis under the bed while Marion and Grant make love) and you can visualize the colors being used including the endless snow in the woods. “When you add snow to any horror situation, it makes it that much more intense because you not only have the monsters but you have the weather to contend with. I had a really good time with that. I just wanted the snow to be as much as a handicap,” said Rufty.

In the end, “Desolation” is one of the most personal and realistically horrifying books of the year. It has all the tools, the pace, multi-level description and the troupes to satisfy any horror fan of writing or film. Find out more about Kristopher Rufty and his current work and new projects to come at http://lastkristontheleft.blogspot.com Plus follow Jay Kay at @HorrorhappensFF