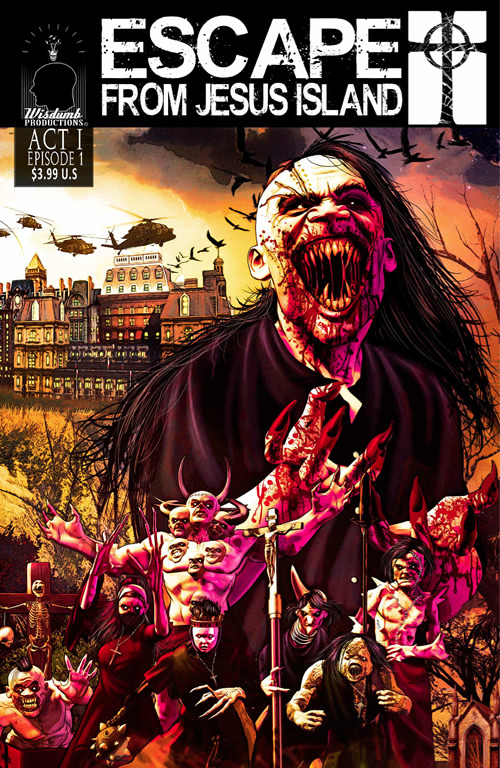 Design a Mutant Contest Announced for ‘Escape From Jesus Island’

Have a great idea for a nightmarish mutant freak? The creators of the Apocalyptic comic book series, “Escape From Jesus Island,” want to hear from you.

Wisdumb Productions is giving fans a chance to create a character in the EFJI story world with their new Design A Mutant contest. The comics tell the tale of an attempt to clone Jesus that goes horribly wrong, inadvertently creating the Antichrist and a horde of near-Jesus mutant freaks. Creators Shawn French and Mortimer Glum are letting fans create the newest addition to the Antichrist’s mutant horde.

“We’ve been extremely fortunate to have such a rabid fan base right out of the gate, so we’re always looking for opportunities to bring them deeper into the project,” said writer Shawn French.

“A half dozen of our characters have been named by fan vote and more than 40 of our fans and Kickstarter backers will appear as characters in our comic in the first eight issues alone,” French said. “This new Design A Mutant contest is a chance to take the interactivity to another level and let our fans actually create a character in our story world.”

The Jesus Island team will select its favorite entry, which will then be illustrated by Mortimer Glum and written into the story world by French. The winner will receive a Mutant Design credit in the issue where their mutant creation first appears, as well as a signed poster of their mutant in action.

HOW IT WORKS: Think up the most fabulously twisted mutant you can and tell us about him/her/it in whatever medium you would like. If you’re an artist, draw your mutant. If you’re a writer, write up a description. We’re looking for the most interesting possible character design, so whatever best helps you express your idea, do that.

BACKGROUND: Your Creation was made by ReGen Corp on the Malsum Island Research Facility and is one of hundreds of horribly mutated, failed clones of Jesus. At some point in ReGen’s brutal testing program, Your Creation earned the attention of Yeshua (the Antichrist), who saved it from extermination.

Who is Your Creation? What are its mutations? What sets it apart from the rest of the horde?

Deadline for entry is August 3. Full contest details at: http://jesusisland.com/2014/07/15/design-a-mutant-contest