Every fan knows that Guillermo del Toro is a superfan of horror and science fiction.  Unlike most fans however, del Toro also happens to be one of the best working directors in Hollywood.

del Toro’s current film The Shape of Water has garnered a wealth of praise, and it would be a great surprise if the director’s work was not nominated once again for multiple awards.

What most critics may not know however is that del Toro’s inspiration for his cold war parable was his childhood memories about Universal’s Creature from the Black Lagoon.

The director recently told the Hollywood Reporter that “The creature was the most beautiful design I’d ever seen. And I saw him swimming under [actress] Julie Adams, and I loved that the creature was in love with her, and I felt an almost existential desire for them to end up together. Of course, it didn’t happen.”  del Toro even imagined them “…eating ice cream, on a double bicycle, having dinner.”

del Toro was long rumored to be working on a remake of Creature, and “When I was in my 30s, I went to Universal and I said, ‘Can we do the movie from the point of view of the creature?’ They didn’t go for it. I said, ‘I think they should end up together.’ They didn’t go for that, either.”

It wasn’t until “…del Toro was having breakfast with Daniel Kraus, the co-writer of his DreamWorks TV series Trollhunters, the director asked what he was working on, and Kraus replied that he was toying with an idea about a janitor who discovers a creature in a secret government facility and takes it home.”

del Toro quickly recognized that Kraus’ simple idea was the bridge to his original Creature idea and asked Kraus if he could”…buy that idea from you? Can I literally buy that paragraph?’ And I made a deal to buy the idea and started working on the screenplay.”

del Toro believed in his story so much that even sunk $200,00 of his own money into the project.  Luckily for all of us, the finished film is about to debut nationwide on December 22nd and will be rolled out to major markets over the next few weeks.  If you are looking to see the film as soon as possible, please consult the poster below to see if The Shape of Water will debut in your local market sooner than nationwide release date. 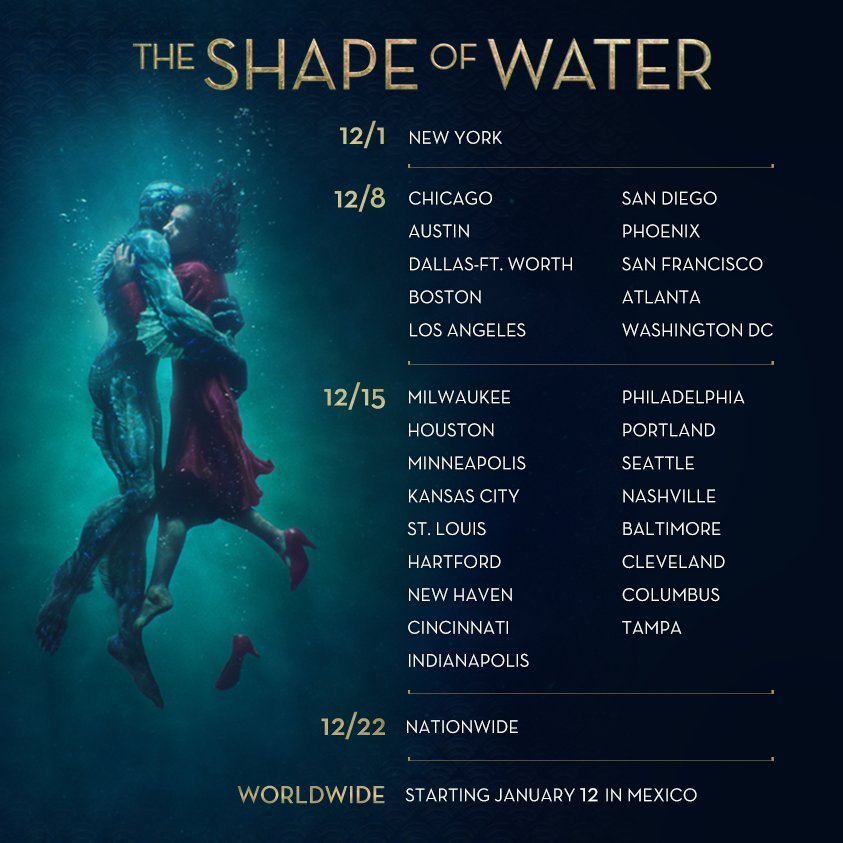