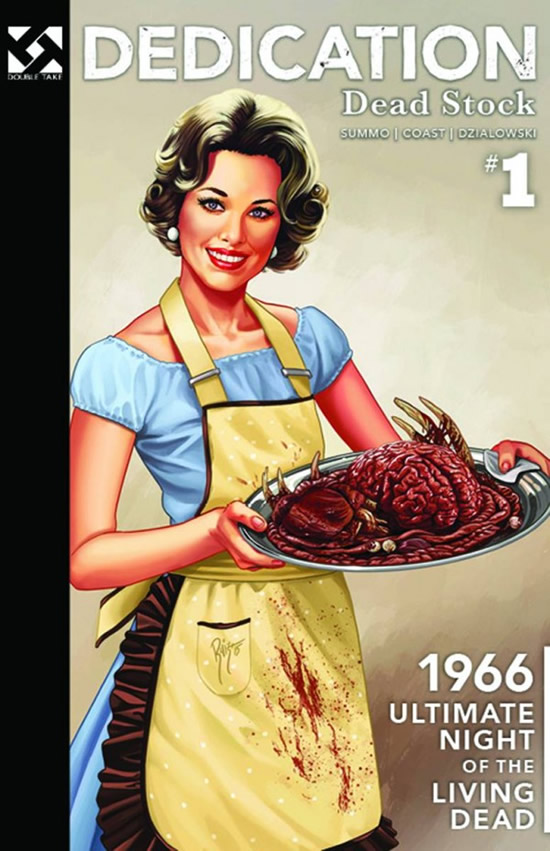 A new generation of creators tell stories set in the universe of the cult classic Night of the Living Dead.

In the title, Dedication, thanks to some hungry customers, the closing shift at George’s Market has turned into the graveyard shift

We caught up with Dedication writer, Matt Summo to talk about the title.

Horror News Network: Night of the Living Dead is hallowed grounds for horror fans. Can you talk a bit about stepping into that realm and adding your voice on the world?

Matt Summo: Stepping into that realm was daunting to say the least! I remember seeing the movie many years ago at my good friend Jason’s house and it blew me away. (Specifically the ending! No spoilers. Watch it if you haven’t seen) Some might say that treading such ground is sacrilege and I’m normally inclined to agree, but we’re adding a different spin to it and (without spoiling anything) building an entire universe off of the original film.

Adding my voice to this world was a lot of fun. I was able to add some authenticity to the story as I spent a great deal of time working in retail, so some of the characters and situations are loosely based on real life.

Horror News Network: When does this story take place in the timeline?

Matt Summo: All ten of our number 1 issues that release on September 16th all take place during the initial “Night of the Living Dead”. Most are original characters and stories, except for “Soul” which is about Ben, “Slab” which is about Dr. Grimes and “Rise” is about Jonny and Barbra. Since we’re building a universe, there will be moments in some books where characters will crossover.

By the way, all ten issues can be read for free at doubletakeuniverse.com!

Horror News Network: Tell us about the main characters in this series and how they develop during the outbreak?

Matt Summo: The main characters of the story are George (the store manager), Michael aka “Trip” (floor) and Dee (seafood clerk).

George is your typical manager; mostly easy going, until you do something that he thinks is wrong. He’s more hands-on than previous managers I have encountered though, as you’ll see.

Michael aka “Trip” is good at what he does, however, I wouldn’t consider him to be a hero of this book by any means. He’s just a kid trying to do his job during what is definitely the weirdest night of his life.

Dee is a no-nonsense kind of gal. She’s definitely the more heroic between her and Trip. When she discovers that these “people” have entered the store, she immediately drops what she is doing and confronts them.

Horror News Network: Can you tell us a bit about the zombies in this book?

Matt Summo: The zombies are hungry. Like, break into a supermarket and start eating everything that isn’t tied down hungry. And they don’t take too kindly to being prevented from doing so!

Horror News Network: What can horror fans expect in terms of blood, guts, and brains?

Matt Summo: Horror fans can expect everything they know and love about zombie films and television with a few added twists! I don’t want to spoil too much (they’re watching!) but there’s no shortage of zombie deaths and gore in our books! Specifically, look out for a particularly cool moment in issue 2 that I won’t spoil here!

Horror News Network: In closing, what would you like to say to our readers about NOTLD Dedication?

Matt Summo: Dedication is a labor of love. It’s a story about being so dedicated to your job that you would stay and defend it instead of running from the living dead. I encourage you to check out Dedication and all of the other 9 number 1 titles Double Take is releasing in print on 9/16/15 on DoubleTakeUniverse.com for FREE!

Horror News Network: Thanks Matt!  Best of luck with this title.