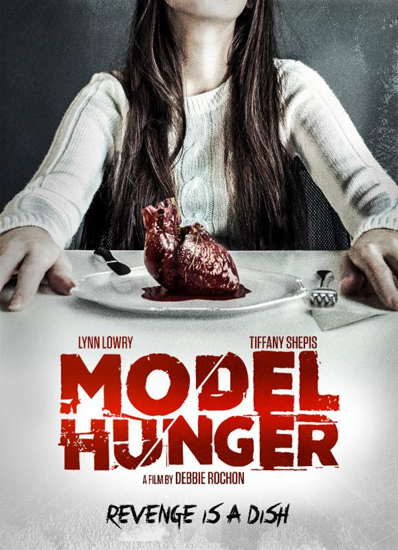 New York, NY – WildEye Releasing is honored to team up with legendary Scream Queen Debbie Rochon to feed audiences her directorial debut, Model Hunger.  After nearly 300 films, Rochon (Return to Nuke ‘Em High, Phobia, The Theater Bizarre) steps behind the camera to skewer audiences with her blood-curling take on an actress’ response to forced retirement.

Former pinup model Ginny (Lowry) had been cast aside by the heartless and exploitative modeling industry.  Ginny didn’t take rejection well and grew into a revenge-seeking, bloodthirsty, broken woman. When her new neighbors Debbie (Shepis) and Sal (Capobianco) move in, Debbie begins to notice strange things going on. Sal believes she is mentally unstable, but Debbie becomes determined to figure out what secret life Ginny is leading. Her new nosy neighbor throws a damper on Ginny’s private life: her cannibalistic addictions and ever-growing body count. Both women become determined to put an end to the other’s obsession.

Model Hunger will satisfy horror fans on DVD and Digital HD this summer.