Have you ever watched a movie and wondered if the writer and director had ever seen a movie before? Better yet, have you ever wondered whether the folks who made said movie might be high school freshmen boys who are having a competition to see if they can get the girl with the huge boobs to unleash them in their home movie? These are just two of the thoughts I had while watching this movie. Oh yeah…another thought I had was, whose idea was it to fade to black like thirty-four times during this film? But, I digress.

The film opens with trailers (thank god) – First up was Halloween Kills which just looks…awful. Then was the new James Wan film Malignant which appears to be rife with CGI jump-scares. Next up was the interesting looking Antlers which is produced by Guillermo del Toro (yay for filmmakers!) and then the trailers ended with a curious Icelandic film called Lamb starring Noomi Rapace. Well, enough of the good news…onto the rest.

Death Rider in the House of Vampires starts off with Devon Sawa (a.k.a. Death Rider a.k.a. Alex from Final Destination) as he rides his horse through a desert and past many hand-written warning signs telling the readers, and maybe movie-goers, to “turn back now”. Death Rider rides this horse for a very long time. No, I mean a really long time. Thankfully, he’s accompanied by a good piece of music from Danzig which unfortunately doesn’t do much to make us forget that this scene really drags for a long time. However, Death Rider is hauling a well-endowed topless woman on another horse behind him so there’s that. She just kind of flops around while they’re riding. She doesn’t say anything, she just flops.

Then they run into Danny Trejo in the desert. Seeing Mr. Trejo in a movie is usually a treat, but not today. He says some lines that sound like he may have been ad-libbing. One can only hope that these lines weren’t actually on a script (was there a script?). He starts yelling things through his fangs about “leave the girl”, “you’re gonna die”, etc. Devon then jumps off his horse and runs at Trejo really fast and then comes the first of many times we fade to black. The audience laughed. I groaned.

After finishing his business with Mr. Trejo (bye Danny!), we’re treated to what felt like twenty minutes of opening credits and titles scenes – all very elaborate and probably costly. After the credits fade out and we fade back in, Death Rider rides some more. He’s very good at riding – he has a lot of practice. Finally, we arrive at the Vampire Sanctuary where Death Rider is seeking asylum. Through some laughable dialogue, we learn that the price of entry to the Sanctuary is a “pure girl”. It was never said whether the “pure girl” must be topless so one can only assume that that was Death Rider’s touch.

Seeing as how Glenn Danzig told everyone this film was to be a vampire movie mixed with a Western, everyone in the Sanctuary is a vampire wearing a cowboy hat or a vampire damsel…you know, like ones you’d see in a Western. Plus prostitutes – there’s lots of prostitutes. Oh, and Danzig, for his role as Bad Bathory, kind of eschewed the traditional cowboy look for more of a “guy who may be leading a very short battalion of soldiers into a Civil War battle” vibe.

After some more big boobs and some sex we start to get the feeling that maybe Death Rider isn’t just there to hide out, maybe he’s there for some sort of revenge. We get this feeling because through the long stretches of random scenery with no dialogue, out-of-focus close-ups and random fade-ins-and-outs, we’re forced to try and make our own assumptions about where this movie may be headed.

To sum the film up, things happen to characters who you have no vested interest in and, in the end, what we’re left with is a fun performance by Eli Roth, a too-short performance by the Soska Sisters, and an always capable Julian Sands struggling mightily with the quality of material that he’s given to work with.

Meanwhile, Glenn Danzig is laughing at us all while he works on the sequel to Death Rider in the House of Vampires, because if Glenn has proven anything with his two films Verotika and Death Rider, and with his music career, it’s that Glenn doesn’t give a shit what we think and he will continue to make the art that he wants to make. No matter if we like the final product or not, his drive to remain true to his vision is always commendable.

I’ll see you for Death Rider in the House of Werewolves…or whatever the sequel may be. 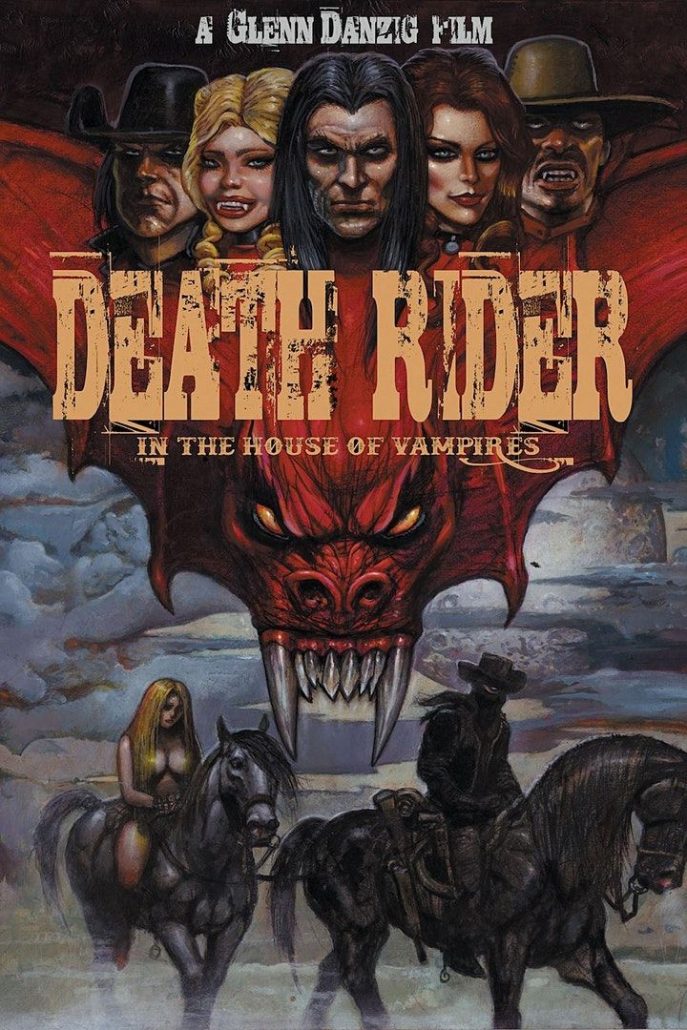