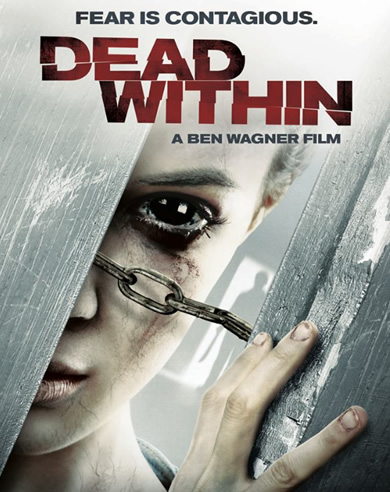 Synopsis: Set six months after a deadly outbreak has all but ended the human race, a man and woman have survived by isolating themselves in a remote cabin and never opening the door. Now, they don’t have a choice. Starved for resources, they must confront the horrors that threaten them… but what’s inside may be even more toxic than what remains outside.

Our Thoughts: I’m tempted to say that this film by Ben Wagner is a new twist on the zombie genre, but that is too cliche and really misses the point of this film. The plague that has terrorized the world is really nothing more than a backdrop for the survival of a married couple who may very well be the last two humans on the planet. Trapped in a cabin together, the fear and anxiety is not restricted to the happenings outside.

The film has very little set up and arrives quickly at where it needs to be to tell its story. Married couple Mike and Kim arrive at a cabin in the country to enjoy some relaxing time with friends. Only minutes into the film, we see Mike and Kim wake up in the dark, boarded-up cabin next to a machete. What happened? Well, we learn more about that as the film progresses. While details are vague, anyone who has ever seen a zombie/outbreak film will get the idea very quickly. However, the real story here is not what happened outside the cabin, it’s what’s happening inside. This couple have only had each other for help, support, and companionship for months. I suspect any married person reading this will immediately see the opportunity for blame, frustration, and severely hurt feelings. With nowhere to place your fear and anxiety, you attack the only other person around.

I found it impossible to not compare this movie to the 2003 movie, “Open Water,” a shark movie that wasn’t really about sharks. Sure, there were great, terrifying shots of sharks, but the sharks were really just a catalyst to get the normal, happily married couple to tear each other apart. Like “Dead Within,” that couple only had each other to rely on, and they took turns providing support and receiving the spouse’s misplaced attack. A big difference between the two is that “Dead Within”  picks up after months have gone by so the immediacy of the situation is less, but the opportunity for psychosis of the characters is much farther along.

“Dead Within” is a great horror film that will have you considering the apocalypse in a different way. It reminds us that it’s time for us all to update our Emergency Response Kits. We need to reload our food, water, and bullets, and also find something the will keep us loving and supportive of our spouses when the worst is upon us. If anyone figures out what that is, please let the rest of us know while there is still time.

For more information: Check out the “Dead Within” website: http://deadwithin.com. You can watch the trailer and prequel webisodes there. The film is now available on most digital platforms and DVD.