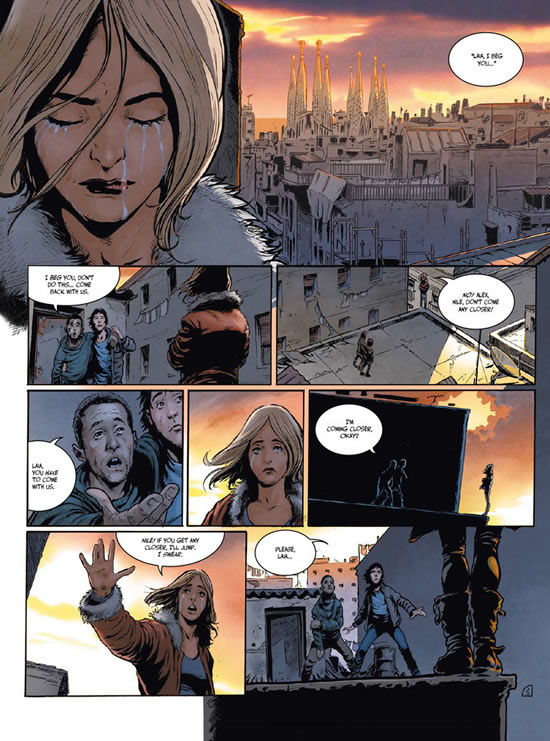 David Munoz talks The Last Ones

A cataclysm has transformed the Earth’s atmosphere, blocking out all ultraviolet light, plunging it into a new ice age, and giving vampires free reign across the planet. With the human race threatened with extinction, two adults and a handful of children struggle to survive, hidden in the rubble of a ravaged Spanish city. Led by a mysterious savior who joins them, they embark on one last, desperate gamble to cross Europe in search of refuge, to where the last of humanity is gathered. Written by horror maestro David Munoz (Guillermo del Toro’s The Devil’s Backbone, Whispers in the Walls) and drawn by Manuel Garcia, this moving, yet brutal, tale of friendship and survival leaves bite marks on the neck and frostbite on the soul.

We caught up with writer, David Munoz to talk about The Last Ones.

Horror News Network: How did you come up with the concept for this title?

David Munoz: Well, many stories I write start as an image I don’t quite understand. Many times that image comes to me when I’m taking a walk trying NOT to think about writing. In this case, that generative image was a school bus stopped in a road during a blizzard. Some children were inside the bus and they were very, very scared. And there were no adults with them. And as I always do after an intriguing image appears in my head, I started to make questions: What are the children doing there? What are they so afraid of? Who is out there in the blizzard waiting for them? And as I wanted to write a supernatural horror story, I asked myself, which creature would benefit from weather like that? And that’s how vampires entered the story, and also the idea of setting the story in a post-apocalyptic world. Because another thing I always do when I’m inventing a story is asking myself: How things would get really worse for the protagonists? And as the protagonists were going to fight vampires, the obvious answer was they lived in a world in perpetual darkness. Without the sun as an ally, humans cannot defeat the vampires. It’s their world.

Then I started to create the story, which is such a chaotic process that it would be very hard for me to describe in a brief way. But I’m sure one the main themes of the story, the fear that Elena, the human protagonist has of not being up to the task of taking care of the children, it’s there because it’s what I felt when I became a father. And it’s no accident I started to think about this story just when my wonderful daughter was born.

And of course I’ve always loved post-apocalyptic movies like The Road and the Mad Max series, and I’ve always wanted to write a story set in a devastated world. It’s a dream of mine since I was a teenager.

As always happens, this story has many parents. What I always find fascinating about writing is how at the end of this chaotic process all the pieces fit to create a coherent whole.

Horror News Network: What can you tell us about the vampires within this book?

David Munoz: My vampires are similar to the vampires in Near Dark, a wonderful movie written by Eric Red and directed by Kathryn Bigelow. The ending is awful, but if you stop watching it after the gang of vampires leave the story, it’s an almost perfect vampire tale. When I say vampires I always think about Lance Henriksen and Bill Paxton in that movie. Tough, ruthless, outlaws, both are monsters on the inside and out. Another more recent vampire movie I love is Vampires by John Carpenter, and the first Blade. You can see traces of all those movie vampires in my story. And you could say the main vampire character of The Last Ones is a vampire Mad Max, a lone warrior, a ronin, looking for a mission that gives meaning to his life.

But besides all the obvious influences, one idea I was very interested in exploring is what happens when a race that has always lived in the shadows has to step into the light. If vampires were real they’d have to be very cautious to survive. In fact, vampires are very fragile creatures. The sun can kill them and they depend on humans for their nourishment. And of course if they went crazy and they’d kill all humans they’d be out of fresh blood and they also would die.

So in my story vampires are very well organized and they have developed a code: you don’t turn more humans into vampires unless it’s approved by the Church of Blood, the paramilitary organization that rules the vampire world and in which Nil, the vampire protagonist, serves. Even feeding is regulated.

That’s the only way to guarantee humans will never know about their existence. That’s vampires’ most powerful weapon: nobody is looking for them because nobody thinks they are real.

But… what happens when dense clouds cover the sky and the sun disappears? How do the rules change?

I’ve chosen two vampire friends to dramatize that dilemma. Nil, the vampire protagonist still thinks the old rules apply, but his old friend and now bitter enemy, Alex, wants to take advantage of this new situation to create a new world, a vampire’s world, where the vampires are the dominant species and humans become their slaves.

Horror News Network: Can you talk a bit about the survivors that this story is built around?

David Munoz: Elena is a teacher (or at least we think she is a teacher at the beginning of the story; but she also has secrets) who unwillingly takes care of a group of children. Her plan is finding someplace safe for them and leave them there. She is scared of not being good enough to protect them. She feels she is not up to the task. And in a way the story is the answer to the question “Is Elena the right person to take care of these children?” Can she become the warrior she needs to become?

She is my favorite character in the story. The one I most identify with. When Nil, the lone vampire warrior that wants to help them, appears, she feels relieved, thinking she is going to be able to relax. But of course, things don’t go as she expects.

Regarding the children, their personal journeys are the ones I most enjoyed writing. But I don’t want to give away too much. I’d just say one of them, a girl, Leire, ends up in a very different and scary place than she was at the beginning.

Horror News Network: What can readers expect in terms of blood and guts in this book? What about scares?

David Munoz: It’s very hard to scare the readers of a comic book. Comics work in a very different way than movies. You don’t have sound effects, music and camera movements. But even if you can’t scare them, you can still shock them. I want the readers to be horrified of some of the things that happen to the main characters. That’s my main purpose. I want them to care for the characters and I want them to fear from them. I want them fearing turning the page to see what happens. Regarding the blood and guts, it’s a very violent story. It had to be. And it includes the most horrifying scene I’ve ever written. The funny thing is I did not think it was so horrifying until I saw Manuel’s pages. It’s a scene that gives me nightmares when I remember it. I know it was necessary to the story, but it happens to a child, and being a parent…I don’t know, maybe parents will have a hard time digesting it. But that’s part of what horror is supposed to do, making us face our darkest fears.

Horror News Network: What was the collaboration process like with artist, Manuel Garcia?

David Munoz: I’m very satisfied with Manuel’s art. Every artist is different. Some like to discuss the story with me and some don’t. And Manuel doesn’t. He just does his job and he does it very well. From time to time he makes a suggestion, but not too often. The first script I sent him was much more detailed that the second and the third one (in France The Last Ones was published as three chapters). But as soon as I saw he understood the kind of story I wanted to tell, I started to let him make more decisions about the layout of the pages. And anyway I don’t like to dictate artists every detail of every panel. They are artists, they know how to tell a story with pictures better than me.

Horror News Network: What impressed you the most with his artwork?

David Munoz: Something that is very important for a writer: his characters can act. He is also very good with action, but if the characters wouldn’t be able to communicate their feelings without using dialogue, the story wouldn’t work at all. Especially because I don’t like very talky comics. I prefer the pictures tell most of the story. And I love his designs for all the main characters and the fact that nothing scares him as an artist. You can ask for anything because he can draw it.

Horror News Network: In closing, what would you like to say to our readers about The Last Ones?

David Munoz: If you enjoy post apocalyptic stories and you long for the kind of hard as nails vampires we love, this story is for you. And I hope we have done our job well and you care for the characters and their personal journeys.

And I would also like to say The Last Ones is a complete story. All the main story threads are resolved in the last pages. I’d love to write more stories set in that world and maybe using some of the characters, but the story I wanted to tell is already told.

I feel very proud of the work Manuel and I did and I’m very happy American readers are going to be able to read it. When I saw the ad for the book in Previews (which I buy every month) was a happy man. And I especially love the fact that the American edition uses the original title for the story. It was changed in France because it didn’t sound very good in French.

Horror News Network: Thank you for your time, David! Best of luck with The Last Ones.