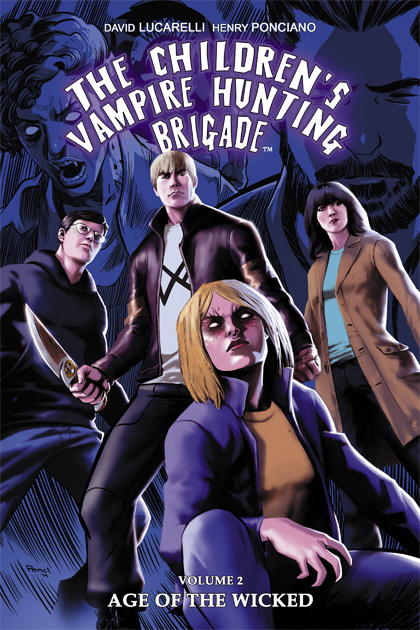 The Children’s Vampire Hunting Brigade is a coming of age Gothic adventure comic inspired by the real life Gorbals Vampire Incident that has been described as “Buffy meets the Outsiders.”

We caught up with writer, David Lucarelli, to talk about the Kickstarter campaign for the second graphic novel in the trilogy.

Horror News Network: For those that didn’t catch the first volume can you give us a synopsis of what happened in the first book?

David Lucarelli:  In Volume 1 Doug and Gavin are two juvenile delinquents who are drinking in a Scottish cemetery. They meet Percy, the night watchman who tells them a tale of how a half century ago he and other children went looking for and found a vampire there. Unfortunately, they happen to be there on the night the vampires come back, and before the story is over they unwittingly become the newest members of The Children’s Vampire Hunting Brigade. It’s a coming of age Gothic adventure story.

Horror News Network: Can you tell us a bit about the main cast in the second volume?

David Lucarelli: Doug and Gavin both come from lower class broken homes and have limited opportunities. Dropping out of school to fight vampires when you’re 16 and feel like you’re going to live forever seems like a rational choice, especially when there’s a couple of pretty girls involved in the mix.

Gavin is the classic bad boy. He loves to party, and knows how to fight and he spends all his money on  peroxide, obscure punk and metal CD’s, and beer, but events are coming that are going to force him to grow up a lot faster than he wants to.

Doug is the heart and the soul of the Brigade. He’s a bit clueless when it comes to women, but he can always be counted on to do the right thing. In Volume 2, that becomes harder for him than ever.

Lucy is as smart as she is beautiful, and being raised by her uncle Magnus, she knows the supernatural and vampires like the back of her hand. She flirts with Doug just enough to drive him crazy, but her current boyfriend is the singer for a punk rock band, who’s got a bigger mouth than he does brains.

Her best friend is Amanda: the half human half vampire girl who was never fully turned and fell into Gavin’s lap as his girlfriend in Volume 1. Right now, she’s in tune with the vampires and maybe the Brigade’s most valuable asset when it comes to being able to track them. The only problem is, once you start to turn, it may be a one way street!

Horror News Network: Can you tell us a bit about the baddies and things that go bump in the night that are within these pages?

David Lucarelli: These vampires are smart, cunning, and perverse.  They certainly don’t sparkle.  In Volume 2 they start appearing in larger numbers and as the vampire threat escalates the Brigade has to try to figure out how and why this is happening.  And there’s a demon they have to worry about as well.

Horror News Network: What can our readers expect in terms of blood and guts?

David Lucarelli: This book is probably a hard pg-13. There is violence. These vampires are killers and we certainly don’t shy away from showing what they do, or what the Brigade has to do to kill them. That said, I think more of the horror is psychological in nature. The horror of not being in control of your own body, of fighting a seemingly unstoppable evil, and facing death head on are more what the book is about.

Horror News Network: What I find really cool is that The Children’s Vampire Hunting Brigade is inspired by the real life Gorbals Vampire incident. Can you tell our readers a bit about that?

David Lucarelli: In real life in 1954 hundreds of school kids went looking for a vampire in the Southern Necropolis cemetery in Glasgow over several nights. It was considered mass hysteria, and was blamed on comics at the time. There’s been several different theories over the years about what may have caused the incident. In the last several years a comic book story from that time period that seems likely to have been the inspiration has surfaced. That was discovered by Stephan Banes, who also wrote the introduction to Volume 1.

David Lucarelli: Henry is amazing. Mike Mignola is certainly an influence, but that’s just a starting point. He’s more than made this comic his own.  He lives in the Philippines. We’ve never met, never even talked on the phone, but we IM each other all the time. I found him on deviant art, and the way we work is I send a script with a panel by panel breakdown. He sends me the rough sketches, I give him notes if I have any, and he does the final art, after which I letter it. We’ve been working together for about two years now, and I think we’re more in sync than ever. The best part of working on the comic is getting a new page and seeing the choices he’s made to bring the story to life.

Horror News Network: About two weeks to go and the Kickstarter campaign for this book is almost there. Can you tell our readers how to donate to this project and the cool perks for doing so?

David Lucarelli: To pre-order the comic just go to our Kickstarter here. We’re at 85 percent, which is great, but I don’t believe in counting my chicks until they’re hatched. On Wednesday April 29th I’m going to be doing two Kickstarter related appearances in Los Angeles. From 12-3pm I will be at Pulp Fiction at their Culver City location. Then from 6-9pm I will be at Golden Apple Comics in Hollywood. At both of these events, if you have backed the book, or you back the book while there, you can get a t-shirt, and poster on top of everything else while supplies last. And at Golden Apple, you can have a drink with me as well!

As far as rewards go, obviously you can get digital and hard copies of both volumes of the comic, but beyond that you can get a pendant replica of the wood knife, which is the  main weapon the brigade uses against the vampires, as well as a full color all over designed t-shirt. At the higher levels Henry will do a personal digital drawing of the character of your choice. I’ll give you a phone call and we can talk about everything from the comic, to what it was like playing in a heavy metal band in Hollywood for a decade, to working as ADR recordist on movies like Captain America, The Avengers, Iron Man 2, Batman Begins, and TV shows like X-Files, and the Simpsons to name a few. The top reward is you get to be a character in the third and final volume.  And to clarify, you won’t be just getting a cameo for a panel or two. You will become a full fleged part of the comic. Aaron Downing backed that level for Volume 1, and he is an integral character in Volume 2. One spot is already taken, and there are two left for that reward.

Horror News Network: In closing, what would you like to tell our readers about The Children’s Vampire Hunting Brigade?

David Lucarelli: The Kickstarter is for Volume 2, and it is a self contained story, but you can also add on Volume 1 to any reward level for the complete adventures of the Brigade.  You can  go to www.cvhb.net and read the first 41 pages of Volume 1 for free, and you can watch our video here, and in less than 3 minutes see and what The Children’s Vampire Hunting Brigade is all about!

Horror News Network: Thanks for your time, David. Best of luck with this title and campaign!