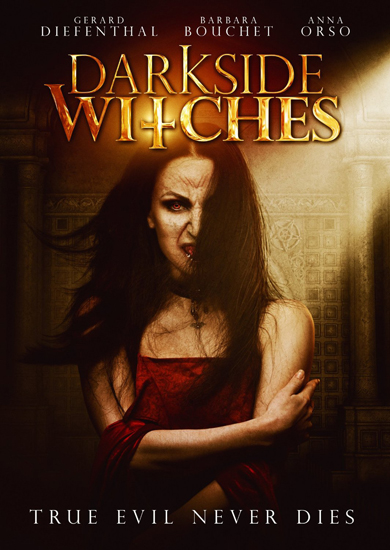 Synopsis: In the year 1589 six innocent women were accused from the inquisition of witchery in the Small ligurian mountain and burned. One of the last women were burned was offered by daemon Pazuzu ” on condition that she swear eternal loyalty and obedience that he will give her the possibility of revenge on the responsibilities and on the people of the mountain. In 20th century the burned women were reborn as evils formed shapes. In the year 2009 some scary occurrences and ritual murders happen. So the Vatican sends the exorcist ” Don Gabriele ” to trace the whole issue.

Our Thoughts: ‘Darkside Witches’ is a gory Italian horror film about Witches burned at the stake in 1589, that come to the present day to take revenge on the Church. The death count is high and the revenge is epic.

Quite different than many indie films you find in the USA, this film has a lot more full frontal nudity and sexual situations that you’re more likely to see in our pornography than our horror.  However, it’s not for nothing. It results in some extremely gory and shocking scenes that viewers, men specifically, won’t soon forget.

I found the soundtrack used and atmosphere created to be the most effective tools to create the dramatic quality the film conveys. However, the special effects are lacking. Despite the effort, much of the computer animation comes off as more campy than terrifying. Though I did enjoy the flying creatures. The practical effects that they did use are much more effective.