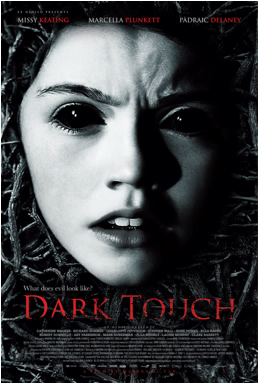 We have teamed with IFC Midnight and SundanceNow in promotion of  their new horror film, DARK TOUCH. Respond to this story or on our social channels for a chance to win  a code to watch the film for free on SundanceNow.

In a remote town in Ireland, eleven-year-old Neve finds herself the sole survivor of a bloody massacre that killed her parents and younger brother. Suspecting a gang of homicidal vandals, the police ignore Neve’s explanation that the house is the culprit. To help ease her trauma, dutiful neighbors Nat and Lucas take her in with the supervision of a social worker. Neve has trouble finding peace with the wholesome and nurturing couple, and horrific danger continues to manifest. Haunted objects, an eerie score and a moody, oneiric look complement this intense and frightening peek into child abuse and the searing imagination of writer/director Marina de Van.