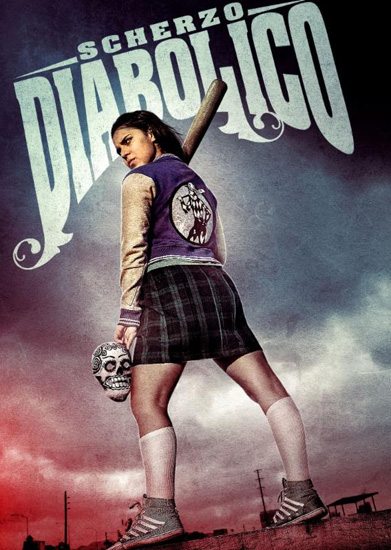 TRAPPED IN A DEAD-END AND MARRIAGE, A TIMID MAN TAKES A   DESPERATE STEP TO BREAK FREE – WITH HORRIFIC RESULTS

The New Genre Masterpiece From Adrián García Bogliano Comes to   VOD and Digital HD on May 3, 2016

“A twisted tale of revenge that continually subverts the viewer’s theories about where it’s going and how it’s going to end.”- Adam Patterson, Film Pulse

A desperate man is pushed to take an extreme action to alter his life, but it may turn out to be the worst decision he’s ever made. The shocking SCHERZO DIABOLICO, the new film from genre maestro Adrián García Bogliano, will be available on VOD and Digital HD platforms on May 3, 2016.

With SCHERZO DIABOLICO, the prolific and wildly inventive Adrián García Bogliano (Here Comes the Devil, Late Phases, The ABCs of Death, Penumbra) has created a tale of dread concerning a seemingly mild-mannered man who enacts a disturbing plan for vengeance.

Aram (Francisco Barreiro, We Are What We Are, Here Comes the Devil) is a low-paid accountant living an unbearably dull existence. With a nagging wife who berates him for not being assertive enough, he quietly suffers while awaiting a long-deserved promotion. But there’s more to Aram than his quiet demeanor lets on: He has been secretly devising a scheme to finally get what he feels he is owed.

One day he asserts his power menacingly when he kidnaps a schoolgirl (Daniela Solo Vell, Eddie Reynolds y Los Angeles de Acero) and keeps her tied up in an abandoned warehouse. But what seems like the perfect plan soon unravels into his worst nightmare, and his carefully constructed scheme comes crashing down piece by bloody piece.

In this twisted thriller, Bogliano uses his startling visionary style to subvert genre conventions while constantly keeping us guessing as to what will happen next in what becomes a gritty game of cat and mouse.

SCHERZO DIABOLICO was an Official Selection at the 2015 Tribeca Film Festival, Cannes Film Festival, Sitges Film Festival and other major events. Patrick Cooper of Bloody Disgusting called it “a morbid tale of deception and ambition that plays out like classical tragedy.” Fangoria’s Madeleine Koestner called it “a psychological rollercoaster of depravity and adventurous ideas,” while Adam Patterson of Film Pulse said it is “Bogliano’s best film yet.”

Dark Sky Films is an independent film production and distribution label founded in 2008, working with emerging talent as well as established veterans to develop, package, produce and finance feature film and episodic television projects. Representing films from some of the most talented directors working today, such as Ti West’s The House of the Devil and The Innkeepers, and Jim Mickle’s Stake Land, Dark Sky continues to identify original talent and projects to bring a vibrant slate of films to the world market, with such recent releases and productions such as We Are Still Here, Deathgasm, Applesauce and Emelie.