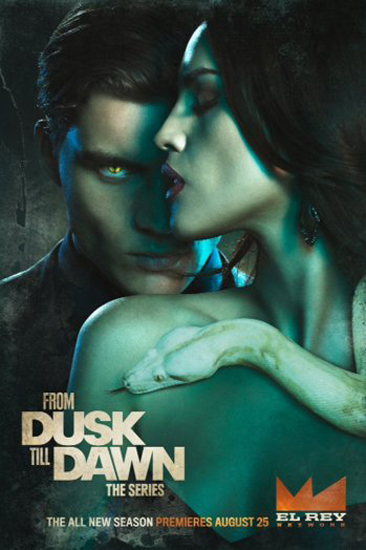 Dark New Poster for Season 2 of ‘From Dusk Till Dawn’

Today The Hollywood Reporter exclusively posted the dark new poster for Robert Rodriguez’s ‘From Dusk Till Dawn’ El Rey Network/Miramax series has been released.  The network is calling season two darker that the first.

El Rey Network’s VP and Creative Director Kurt Volk said “We’re in the second act of the story and it’s taken a dark turn. If season one was the day, season two is definitely the night.”  He went on to say “The Gecko brothers have split up and now it’s all about the new pairings. This composition really appealed to us—she’s a goddess and Richie is evolving,” said Volk. “The cool blue palette is a thread throughout the season. During season one, our characters spent a lot of time in the middle of nowhere. This season, they spend a lot of time in the city-as a result, the series has a slicker, more urban sensibility and that is definitely reflected in our design.”

Holtz and Gonzalez are returning for season two, along with D.J. Cotrona, Jesse Garcia, Wilmer Valderrama, Madison Davenport, Brandon Soo Hoo and guest star Jake Busey.  New members of the cast include Danny Trejo as The Regulator, Esai Morales as Lord Amancio Malvado, Jeff Fahey as Uncle Eddie Cruickshank and Briana Evigan as Sonja Lam.  ‘From Dusk Till Dawn: The Series’ is returning Tuesday Aug 25 at 9 p.m. ET, with a 10-episode second season.   Creator of the original 1995, Robert Rodriguez, is directing the premiere and the finale.