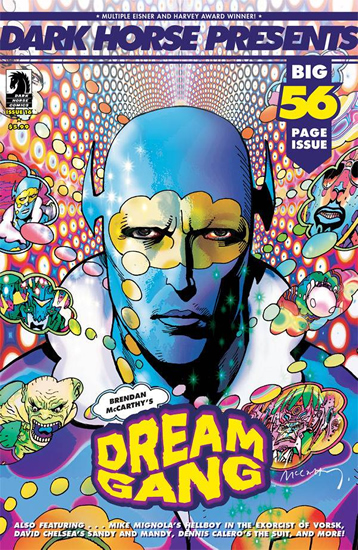 Our Thoughts:  Although not as heavy on horror stories as recent issues, this issue of Dark Horse Presents does deliver with the star of the Dark Horse Family in the shape of Hellboy and rising star Alice Creed of Semiautomagic.  Saving the best for last (or the first entry if you start with the Mignola cover side of this flip book), Mike and Todd Mignola tell the story of Yegor Ivanovich, a lost soul languishing in Hell.  Hellboy (who, lest we forget, is still imprisoned in Hell) hears Yegor’s story of wasted good fortune. This eight page story is a great example of the humor and horror that Mignola has combined so effortlessly in his 20+ year run with his character.  Without giving away the joke, fans will appreciate the combination of a wife, a well, and a budding career as an exorcist.   This is a nice appetizer for future issues of Hellboy in Hell.

Alex DeCampi’s Alice Creed has her hands full in the second to last installment in her demon fighting magician’s most recent adventure.  The artwork of Ordway is perfectly suited for this series as he is able to draw realistic characters in a hospital setting and bizarre demons equally well.  A stand-alone mini-series is probably not far behind after positive fan response for this new addition to the Dark Horse stable.