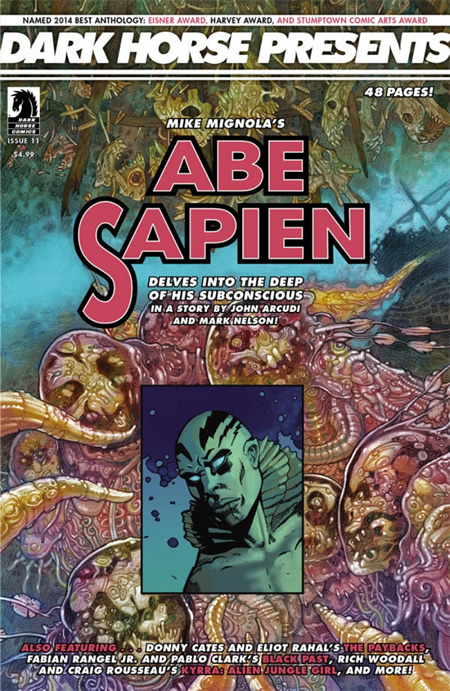 Our Thoughts:  Horror fans have two excellent short stories to look forward to in the latest issue of Dark Horse Presents.  The feature attraction is another character driven story by John Arcudi that serves as a primer on Abe Sapien for new fans of Mignola’s Hellboy universe, but also elaborates on Abe’s past and his struggles with life “above water”.  Arcudi is known for infusing personality and heart into Hellboy’s supporting cast, and this story is in exception.   Abe is one of the most human of the crew and this story perfectly captures the “man caught between two worlds” motif.  The story also exhibits the storytelling and diversity of Mark Nelson’s artwork.  Nelson begins the story with a Mignola-esque style and then transforms the artwork into a painted style with a completely different color palate, before transitioning back to the traditional style of the BPRD.  I had to look at the credits again to be sure that Nelson wasn’t being assisted by another artist on the story, which certainly speaks to the artist’s range.

Fabian Rangel Jr. and Pablo Clark’s supernatural crime drama Black Past!  starts off with a bang (actually, more than a few bangs) by briefly introducing the head of a traditional crime family who has clearly made a deal with the wrong woman.  Lots of violence and bloody recollections of William Blake lead to a cliff hanger ending.