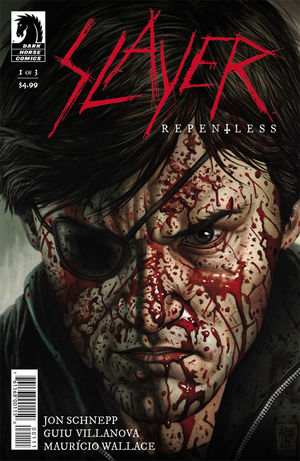 Heavy metal, gothic rock, and comic books have had a long history together.  Whether it is the legendary story of Kiss pouring their vials of blood into the ink vats that would produce Marvel Super Special: Kiss #1 in 1977 or the later colaboration in 1994 between the original “Shock Rocker” Alice Cooper and Sandman creator Neil Gaiman on Alice Cooper: The Last Temptation, comic history contains many examples of cross-overs between the world of rock and roll stars and comics.

While the aforementioned comics (as well as a slew of Kiss branded comics produced over the years) focused on the band or performers as “the stars of the show”, other comic creators have been more tangentially inspired by a band’s music.  James O’Barr often discusses how music influenced the creation of The Crow, as some chapters are named after Joy Division songs and the lyrics of Robert Smith of The Cure are found throughout the first story.

Of the two types of comics, Slayer Repentless #1 is certainly more similar to Barr’s dark comic than the spectacle of Kiss or Alice Cooper and when it comes to dark, heavy metal music, no band fits this description better than Slayer.

Dark Horse Comics Slayer: Repentless mini-series is the third installment in a series of projects from the seminal thrask metal band.  The original source material is Slayer’s twelth album Repentless (the first album since the death of founding member and guitarist Jeff Hannemen).  After the album was released in 2015, the band was approached by their label’s (Nuclear Blast) General Manager Gerardo Martinez to make a music video for the title track “Repentless”.  Budding horror director BJ McDonnell (Hatchet III) was tapped to direct and assembled a “who’s who” of genre stars such as Danny Trejo, Bill Moseley, Tony Moran, Derek Mears, Tyler Mane ,Vernon Wells and newcomer Jason Trost, who McDonnell worked with on Hatchet III. 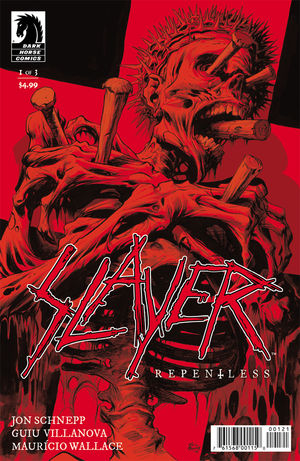 The video (produced by another 80’s horror alum Felissa Rose) was a big success and the band and director decided to turn the original video into a trilogy, adding videos for “You Against You” and “Pride and Prejudice” to the storyline.  The three videos tell the tale of a twisted family, steeped in white supremacy, hatred, and murder. When a member of the family (Wyatt) decides to turn his back on the group’s beliefs and criminal practices, he becomes the target of the sadistic clan.

The story continues in its third medium as a comic book written by Jon Schnepp (director/producer of the cartoons Metalocalypse and Venture Bros.) with interior art by Guiu Vilanova (Twilight Zone, Conan the Avenger).  Schnepp recently penned his own Metalocaypse Dethklok crossover with Eric Powell’s The Goon for Dark Horse (Powell also provides a gruesome alternate cover for the series’ first issue) and a mini-series based on the fictional band.

Picking up directly where the “Pride and Prejudice” video left off, the protagonist Wyatt and his fellow escaped prison comrade are “on the lam”, with some nefarious forces in hot pursuit.  The comic also contains flashback scenes from the videos, brought to the four-color medium by Vilanova, whose attention to all the gory details fits the comic and story perfectly.  Schnepp does a fine job of filling in just enough of the story to extend the narrative, but I would not recommend starting this story until you are able to view all three videos, as the comic “hits the ground running” as a true extension of the video trilogy.  It appears that future issues in the series will be able to extend the story to a greater degree without feeling the need to catch readers up to speed with what has already transpired, but at this point, issue one of the new series is a worthy addition to the source material, making the comic the last installment in a triple threat of terror and metal.