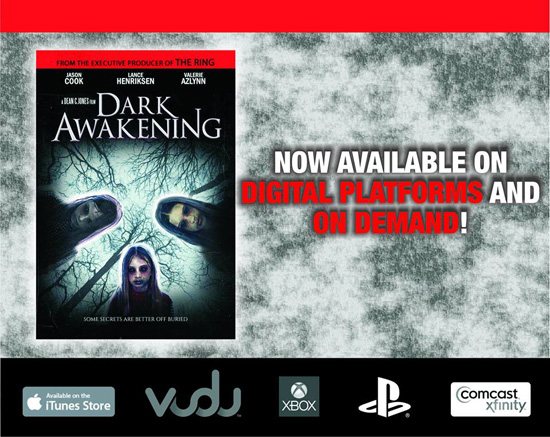 ‘Dark Awakening’ from from Cafe Oscuro Films — Arising This October!

“Haunting both visually and narratively…” – Dave Dreher, The Horror Channel

THIS MONTH – JUST IN TIME FOR HOLIDAY NIGHTMARES!

LOS ANGELES, CA –  Just in time for the horror season, the critically-acclaimed thriller DARK AWAKENING becomes available on DVD, digital and On Demand platforms through Alchemy Entertainment.  Released on September 22, 2015, DARK AWAKENING is a suspenseful thriller that keeps you on the edge of your seat holding your breath. Directed by Emmy™ winner Dean C. Jones and starring iconic actor Lance Henriksen (Aliens, “Millennium”), the film centers around James Thomas (Jason Cook), a district attorney who has seemingly left his family ties behind him.

Due to his mother’s untimely death, James moves his wife, Jennifer (Valerie Azlynn), and 7 year old son Danny (William Pifer) to the family’s rural estate in Cedar Rock Falls, North Carolina to tie up loose ends and sell his mother’s house. Shortly after arriving, Jennifer and Danny begin to experience strange paranormal occurrences involving the spirits of children. And to add to the peculiar nature, it seems that Danny is the only “living” child in town.  Determined to understand what is happening, Jennifer seeks spiritual guidance from the parish priest and family friend, Father Donovan O’ Malley. The mystery deepens with Father O’ Malley. He is cognizant of the origins of the dead children, the reason for their resurrection and how and why it ties to her husband James, who holds the darkest secret of all.  The film was executive produced by Liliana Kligman and Michele Weisler (The Ring).

The film was a co-production between Café Oscuro Films, LLC and Atlantic & Pacific Pictures. It has been featured as Official Selections at both the 2014 SITGES Film Festival and the 2014 Montreal Comicon Horror Film Festival.  The film also screened at the Cannes Film Market in May 2014.  The Little Film Company is its worldwide representative.