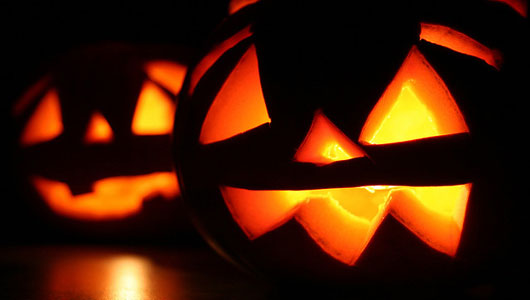 Music adds a special spice to all holiday activities, and aside from the undisputed champ of holiday tunes (that would be Christmas), every holiday has a certain soundtrack to help in the celebrations.  Albums, radio station playlists, cds, and the traditional local television station’s “Yule Log” have all helped deliver the music of your favorite seasonal holiday for generations.

While many of these traditional formats are still nostalgically revered  by fans, in the digital age, it is much easier to access beloved classics on a computer, phone, or cable television connection.  The world’s first digital audio broadcast service company Music Choice (originally named Digital Cable Radio) has been delivering content to listeners since 1987 and one of their staple channels is the ever-changing “Sounds of the Seasons” (and for horror fans, there is one season that holds a special place in all of our hearts… ).  Regardless of what cable provider that you may subscribe to in your region, there is a very good chance that they carry the Music Choice service as their exclusive music provider, allowing fans access to a diverse mix of Halloween favorites.

Horror News Network had the opportunity to interview Damon Williams, Senior Vice President of Programming Strategy and Partnerships for Music Choice and found out how the music is selected and the philosophy behind the channel (and who knew that Halloween was behind the 4th of July in terms of ratings! Fireworks I get, but music? Let’s get on this horror fans!).

Horror New Network: Aside from Christmas, Halloween has the biggest demand for music related to the holiday.  Do you also find that the demand for the channel is high?

Damon Williams: Halloween is third most popular holiday we celebrate on our Sounds of The Seasons channel, behind Christmas and 4th of July.  It is more popular than Valentine’s Day, St. Patrick’s Day, Cinco De Mayo and a bunch more of holidays that people love to celebrate! The demand for the channel seems to grow year over year as more and more people (kids and adults) have parties and events that require a Halloween themed soundtrack. We cherish the opportunity to be the curators of that soundtrack who can set the perfect mood for our listeners.

HNN: How is the playlist constructed and do new artists or songs get added on a yearly basis?

Williams: Our channels are curated by our Programming team who specialize in creating sonic experiences. They construct the channel playlist in a way that strives to capture all of the moods Halloween – scary, fun and exciting. We update the station yearly with new Halloween themed music, facts and photo images.  In 2012 we added some very short sound effects in between songs to help with the flow of music and mood of the channel. Customers loved the scary sounds so we have built on that theme each year adding more scary sounds. We also added a bunch of classic horror movie soundtracks as well – such as the theme song to Jaws and the Michael Myers theme song from the classic movie Halloween.

HNN: Has the channel changed over the years in terms of the philosophical approach to the channel?

Williams: Our programming philosophy for the channel remains the same – to serve as the soundtrack for Halloween by delivering a full consumer experience of music, images and fun facts that set the mood for this special day. We focus on curating each song in the playlist and insure that the playback of music from song to song flows in a consistent manner. We want to you to have fun while listening even if that means scaring the heck out of you with some scary movie soundtrack that put hairs on your back

HNN: The channel has a very diverse mix, from creepy sound effects to the Rocky Horror Picture show, to Screaming Jay Hawkins.  How do you maintain this diverse mix?

Williams: Because we are commercial free audio we are able to play more songs per hour than traditional radio. This gives us an opportunity to dig into our Halloween music catalog and find variety songs to create an experience. We are always on the hunt for new music or new sound effects to make the channel sound like a Haunted House! Creepy is good with us as longs as its engaging for our listeners.

HNN: The channel is now offering video on demand playlists for Halloween.  Where did this idea originate?

Williams: We always had Halloween videos available On Demand.  But our playlists have become very popular with our audience so we decided to do Halloween themed playlists this year so that people can go to On Demand and watch them during their Halloween parties. Having a visual component to our Halloween offering adds another great reason for our viewers to spend more time with us across our audio and video services.

HNN: Thanks for your time and please keep adding new content to the Halloween Sounds of the Seasons channel for horror and Halloween fans everywhere!