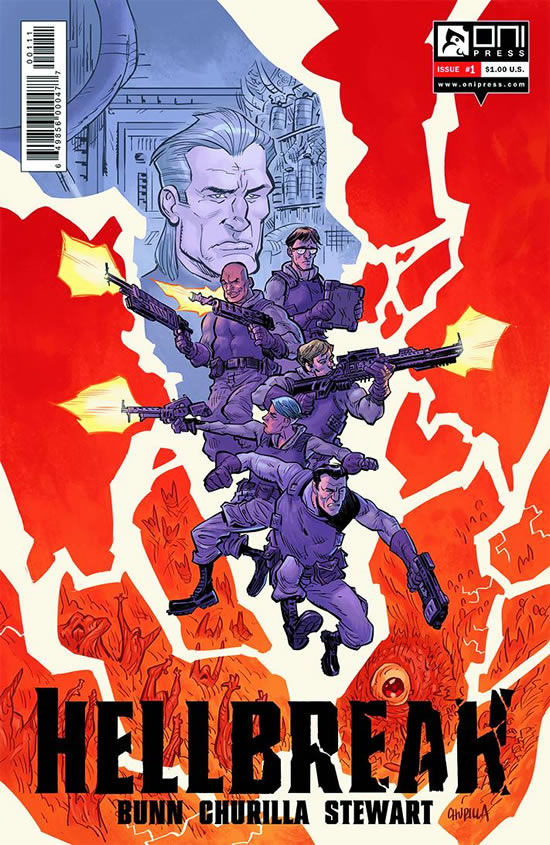 We caught up with writer, Cullen Bunn to talk about Hellbreak.

Horror News Network: Can you talk a bit about the concept behind Hellbreak?

Now imagine that when someone is possessed by a demon, their mortal soul is cast into one of these Hells, displaced while the demonic entity takes up residence in their body. In order for an exorcism to be successful, not only must the demon be expelled, but the human soul must be retrieved.

Finally imagine that we have developed technology that allows us to physically enter Hell, and in order to retrieve these wayward souls, a team of highly trained mercenaries are dispatched into Hell on search and rescue missions.

Horror News Network: What can you tell us about the group of soldiers in the book?

Cullen Bunn: There are six members of Orpheus Team, the squad dedicated to entering Hell and retrieving lost souls. Each team member has a history and plenty of personal “demons” that they carry with them. As the series progresses, each team member will get their moment in the spotlight. For the first arc, though, the team leader Jenner is our focal character.

Horror News Network: Obviously you can’t spoil the story, but what can you tell us about the Kerberos Corporation?

Cullen Bunn: Kerberos has developed the technology to track lost souls and breach Hell. As you might imagine, that kind of technology requires a lot of funding. Kerberos has found a patron with loads of cash-the Church. There are, of course, many mysteries surrounding Kerberos, and the revelation of the corporation’s hidden agendas is a big part of this story.

Horror News Network: What can we expect in terms of horror and fear in this book? These are just humans going into HELL, correct?

Cullen Bunn: Yes, it was very important to me that the members of the Orpheus Team were normal human beings. They’re highly skilled individuals who can outthink or outfight almost anyone. And they’re heavily armed. But they aren’t superheroes. There’s no enhanced strength. No healing factors. No psychic abilities.

And they are going straight to Hell.

The horror comes from a number of sources. First and foremost, we’re seeing these mercenaries dealing with the demons and other denizens of a number of different Hells. These infernal fragments are places of intense sorrow and suffering and terror. In addition, we’ll be seeing some horrific events in our world in the form of the possessions and exorcisms. There’s also a lot of personal horror and tragedy our characters will be dealing with. Going to Hell, even if you get to go back home at the end of the day, has a way of scarring you.

Horror News Network: You have assembled an amazing team that joins you on this book. What can you say about teaming up with artist Brian Churilla, and colorist Dave Stewart?

Cullen Bunn: I couldn’t be happier with the artistic team on this book. Churilla has been drawing issues for a while now, and it’s been tough for me to keep them under wraps. Eight issues worth of his sequentials are just waiting to be seen by the world. And now that Dave Stewart is going to be coloring those pages, I’m even more excited. Those two just work so well together.

Horror News Network: When is the first issue of Hellbreak scheduled to hit stores?

Horror News Network: In closing, what would you like to tell our readers about Hellbreak?

Cullen Bunn: As a special incentive to get readers to try the book, the first issue, which is extra-sized to begin with, is priced at only dollar. As with any new comic, it’s vitally important to pre-order the book if you think it’s something you’re interested in. This is an instance where there’s really no reason not to try the book.

Horror News Network: Thanks for your time, Cullen. Best of luck with Hellbreak!