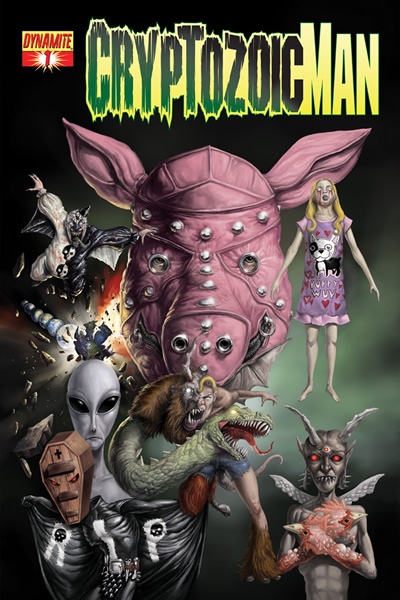 Synopsis: You watched Stan ‘The Man’ Lee pitch it on Season II of AMC TV’s ‘Comic Book Men’; Now, from CBM cast members Walt Flanagan & Bryan Johnson comes ‘Cryptozoic Man’. Alan Ostman, a middle-aged husband/father, sees his life quickly unravel when his daughter goes missing on a camping trip in the Pacific Northwest…Bigfoot country. After Gray aliens abduct him from a roadside bar, he learns that the fate of the world is dependent on trapping the world’s most legendary cryptids…not to mention defeating a psychopath in a pig-shaped leather bondage mask, Alan knows he has his work cut out for him.

Our Thoughts: The first issue of Cryptozoic Man finally debuted from Dynamite Entertainment and we were able to get an early look at the first issue.

The character of Cryptozoic Man is a lot to take in as he seems to be part man, loch ness monster, bigfoot, jersey devil, mothman, chupacabra and abominable snowman. Yes, all of those. The villain of the first issue was just as interesting as it was a man in a pink suit wearing a leather pig mask with zippers.

In addition to what is listed above we see aliens and demons as well. To say there was a lot going on in the initial issue would be an understatement.

The story held my interest as I was wondering how the hell the main character got these powers(?). The art was also interesting, especially the close ups of the Cryptooic Man.

If you are into monsters with a super hero flair, you will want to take a peek at the debut issue.